POCOMOKE CITY, Md. -- A petition calling for Pocomoke City's mayor to resign has been recalled temporarily by the group that requested it.
The Citizens for a better Pocomoke held a press conference Friday night at the House of Love Christian Center to officially call for Mayor Bruce Morrison's resignation.
Reverend James Jones, a spokesperson for the group, says the petition will be revised and released early next week.
WBOC also spoke to Mayor Morrison earlier today who says allegations of corruption and incompetence against him are false.
Morrison says he is not prepared to resign.
But Morrison and the group's leaders say they are willing to talk about a resolution.
"I would be willing to sit down with the mayor at any given time," said Jones. "We just want honesty. When he speaks, we want him to be straightforward and honest with us."
Mayor Morrison has declined to go on camera with WBOC but he did give a statement Friday about former police chief Kelvin Sewell, who was fired by the council weeks ago and prompted the group's formation.
Morrison says the "chief works at the pleasure of the council," the decision was made by the council and the council acts on behalf of the people in Pocomoke City.
Posted by tk for PPE at 6:28 AM 19 comments:

Pocomoke Remains In The News..

POCOMOKE, Md.-  It's been a few weeks since the Pocomoke City Council voted to remove their police chief.  Ever since that sudden announcement, supporters of Kelvin Sewell have rallied behind the chief.
The matter even caught the attention of the justice department, who this week was in town looking into the situation.  The group who has been pushing for the chief's reinstatement is now calling for the mayor's resignation.
It's been a turbulent few weeks in Pocomoke.  A group calling themselves "Citizens for a Better Pocomoke" are petitioning for the mayor's resignation.
"He should be gone, because he got rid of the chief without letting us know what what and why, and because he has his own agenda.  He is an elected official, he speaks for us, and right now, he's not," Michelle Lucas said.
In a statement to WBOC, Mayor Bruce Morrison said:

"I became involved 11 years ago to make positive influence in our community, I believe I've done that successfully.  It's been a very unfortunate and an inaccurate deception of Pocomoke City that is being presented right now.  I have every confidence that we will weather the storm.  I intend to work with all the residents of pocomoke city for a positive outcome.  I have no intention of resigning of mayor of Pocomoke City at this time."
Not everyone though believes the chief should resign.  Long time residents like Marc Scher say Mayor Morrison has been good for Pocomoke.
"He should definitely stay, I feel he has worked really hard, he takes pride in the job he's done, and definitely I think he should stay," said Scher.
"It's important that he stay because he's concerned about Pocomoke, he loves Pocomoke, he's lived here all of his life, and we need a good man representing Pocomoke like he does," said Joanne Lusby.
But others say by getting rid of the mayor, the chief may be able to come back.
"Get rid of the mayor.  Because he has not been honest.  He's a liar.  He did not give the community no explanation, he wanted to do what he wanted to do.  if we stick together as a community, we can get our chief back," said Michelle Kellam-Brown.
The group behind this petition to remove the mayor would not speak to us on camera today.  They intend to formally announce the petition Friday evening in Pocomoke City.
Posted by tk for PPE at 5:51 AM 11 comments:


A local news outlet's article reports on the

purpose of a current visit to Pocomoke City by

members of The Department of Justice

A Celebration of Susan's life will be held on

and arrangements have been made for several

Following Thursday's service, there will be a

Parade"  from the high school, through town to

the draw bridge, similar to the many Susan

experienced in her coaching career, but in the

opposite direction as we send Susan off to her

In lieu of flowers, memorial contributions can

be made to the Pocomoke High School, c/o 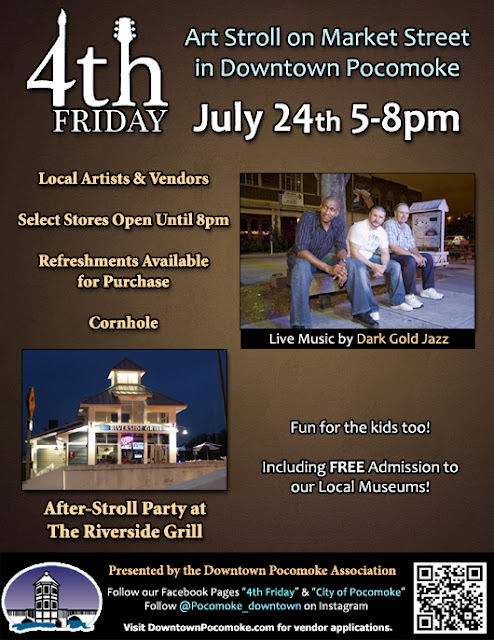 A WBOC report stated she died of a blood clot and that her family stated she had undergone knee surgery on Friday. 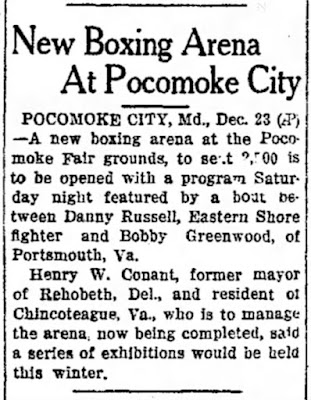 Footnote:   In 1931 former world champion Jack Dempsey made an appearance at the Pocomoke arena as a guest referee for a couple of matches with a crowd of more than 2,000 in attendance. What happend to the arena?  I grew up not far from the Pocomoke Fair Grounds and the arena wasn't there at that time, 1950's.  Only thing there, as I recall, was the dirt track used sometimes for exercising harness racing horses. Stock car races were held at the fair grounds track up to about 1950 or so. -tk

And How Maryland and Virginia Prohibitionists are Fighting it.

Baltimore, Md., Oct 9.- The Prohibitionists of both Maryland and Virginia have tried in vain to reach with the law the flourishing saloon of John B. Blizzard on Fox's island.  The only house on this little tract of land, which is located seven miles from Crisfield, is the residence and saloon of Blizzard, who is reaping a fortune on his sale of "bottled lightning" to the oystermen.  The spot is partly in Maryland and partly in Virginia, yet is amenable to the laws of neither state.  On the mainland all around the island in Virginia and Maryland, local option exists.  The house is situated partly in Maryland and partly in Virginia, but its exact location cannot be arrived at, as it is not included within the lines of any county or district.  Smith's island and Crisfield district lie adjacent to the island, put no portion of it is included within the limits of either of these districts.  The proprietor has no license to sell liquor, and not being in any county, as far as the existing lines show, and being unable to locate himself he has no source from which to produce a license, and consequently goes without.

In absence of an authority to grant license there can be, of course, no authority to prohibit him from selling without a license, and not being within the jurisdiction of any county he is not subject to the existing local option laws of the bordering counties.  His bar-room, previous to the passage of local option laws in the neighboring counties of Virginia, was located on the Virginia side of the line, but after the passage he has removed it a few feet and over the line, and now conducts his business in Maryland.  On this peculiarly situated island a man can stand with one foot in Maryland and the other in Virginia, and drink to the health of both states and defy the authorities of each.

Footnote:  The following item was reported in the Peninsula Enterprise of Accomac in May, 1885: Mr. John B. Blizzard of Crisfield, Md., has moved to Foxes Island, this county, which he lately purchased of Mr. Planner Crockett, and proposes to engage largely in the planting of oysters and the soft crab business there, and at no distant day will open a first-class summer resort.

SNOW HILL -  An auction sale, barbecued chicken, a band concert, and a variety of activities are planned for the annual Snow Hill Homecoming Celebration to be held in Byrd Park tomorrow.

Special guests, the famous character of novel and movies, "Misty," will be on display at the affair. Also traveling with mother to Snow Hill will be "Stormy" the young offspring born to Misty after the March Storm.

Scheduled during the afternoon will be a boat parade on the Pocomoke River, a concert by the Snow Hill High Band, and the ever popular auction.

Offered for sale at the auction are items of every description. This year, according to Mayor James T. Sturgis, an old fashion four-wheel buggy will be sold to the highest bidder. The auction will be under the direction of auctioneer Carol Long of Salisbury.

Officials have reported that the Homecoming grows larger each year. It was reported that more than 1,500 are expected to attend this year's activities. 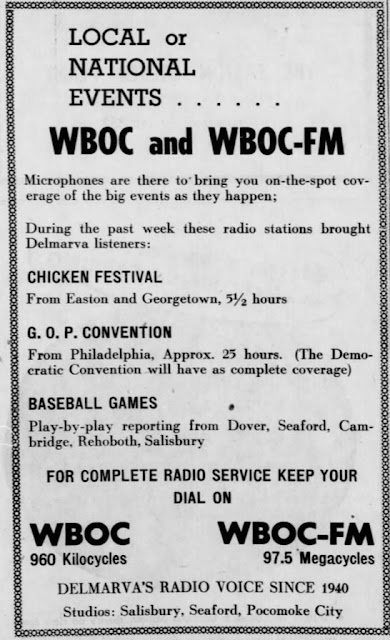 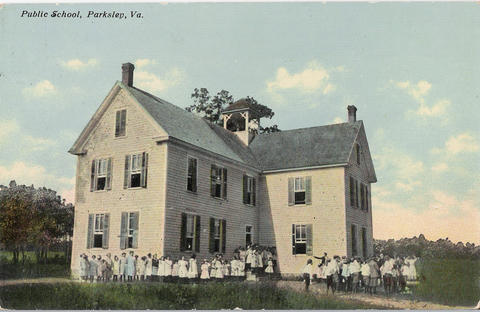 
When you're clicking around the Internet remember to check in with The Pocomoke Public Eye.  We strive to be a worthwhile supplement to your choices.
Posted by tk for PPE at 6:00 AM No comments: