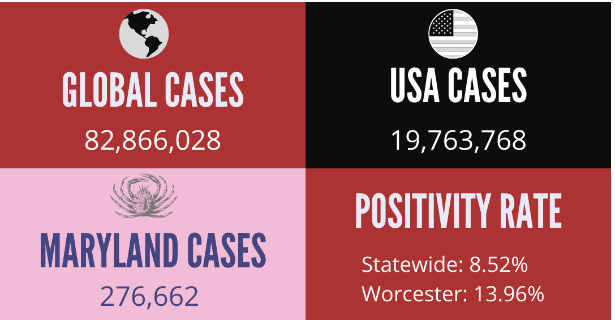 Email ThisBlogThis!Share to TwitterShare to FacebookShare to Pinterest
Labels: Coronavirus

Submit you mask pictures to the City of Pocomoke Facebook page. 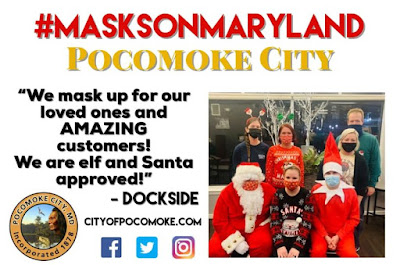 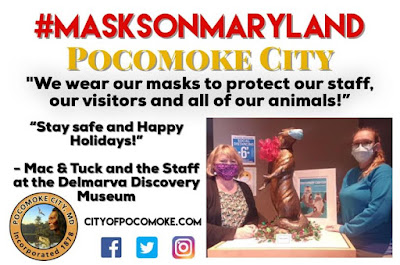 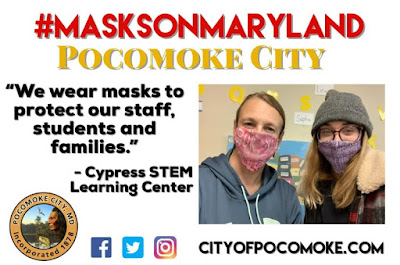 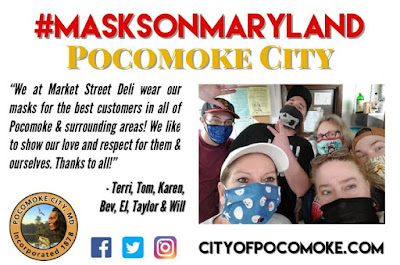 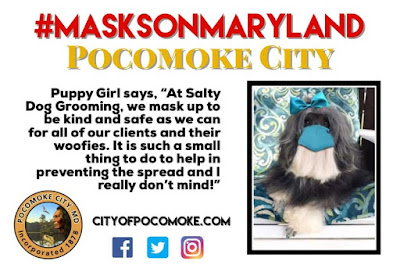 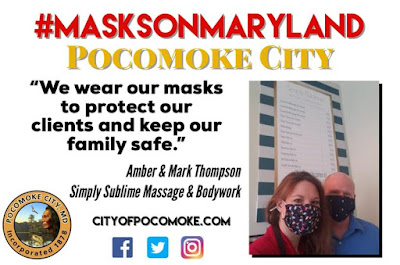 Jan 11 is new back to classroom date in Somerset 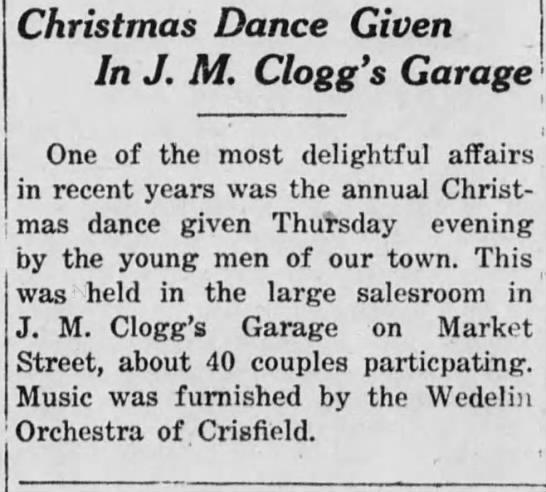 Footnote:   Just a few months away (April 22, 1922) was the most devastating fire in Pocomoke City's history destroying much of the business section and homes in the downtown area. 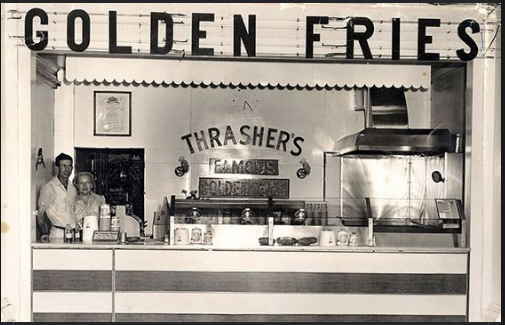 ...the dance was a favorite source of social enter-

tainment in the early history of New Town. There were

three classes of characters, which I shall describe, partici-

pating in this amusement. First, the first citizens ot the

town engaged in it. Sometimes it was the result of a

wedding, a cotton picking, quilting, or it may have been a

special dancing party. I am not now describing the balls

held at hotels where a gentleman and lady could enter by

paying the entrance fee, but social dances held at private

houses for amusement. The host and hostess would pro-

vide such - things as wines, liquors, candies, cake and

tropical fruit to make the entertainment as enjoyable as

possible. The invited guests would assemble after candle

light. They were composed chiefly of single persons, but

sometimes there would be a small sprinkling of married

ones also. An expert fiddler would be engaged. All

things being ready and the parties on the floor, the fiddler

having his fiddle well tuned, would draw his bow at full

length, when a feeling of exhilaration would go through

the room like electricity. The parties now engaged in a

four or eight-handed reel. Oh! what a tine time there

each other on the floor, crossing and around the room,

cutting the pigeon wing, etc. After that reel was over the

hat would be passed around to take a collection for the

fiddler, for that was the way he was paid for his services.

Then another party would be made up and after the dance

the hat was passed around again, and so the night was

spent till or near the break of day. When they would get

weary and laint they would keep their spirits up by pouring

spirits down. At such places of hilarity many a young

lady's heart and hand has been wooed in marriage.

Secondly. The lower class of society in the country,

both of men and women, would attend the holidays in

New Town. On those occasions they assembled at the

hotels and engaged in the dance, and some of the same

order of men in New Town would participate with them.

gathering ol men and women at a hotel engaged in a

regular hoe down, such as was practiced then.

Thirdly. This class would be the colored people. They

would assemble in town from all the surrounding country.

They would construct booths on the hill or public square,

in which they would have for sale cakes, candies, cider,

beer and tropical fruits. They would have all sorts of

is unmeaning, hence I shall be under the necessity of

explaining the process of the dance in this way. The

company would be in the open air on the hill . The leader

in this amusement would pat with his hands and stamp

with his foot while the rest would dance. The leader

would use some outlandish expression in song, such as the

"Juber up and Juber down,

And when they would reach the climax, he would sing-

out with an extended voice ■

Then such antics and gymnastics as the dancers would

perform with their hands and feet, keeping time with the

leader, as would be truly diverting to the reader could he

behold such a performance now. Another song which

they would sing in their dances was:

I have endeavored to spell their words as they would

pronounce them, Late in the afternoon, they would be

seen with their little bundle of cakes, getting ready to start

for home. Thus the day closed with them.

PPE Footnote: "The Hill" (i.e. Public Square) was a high mound at the foot of Market Street. 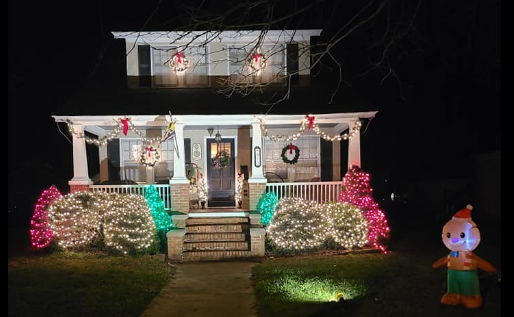 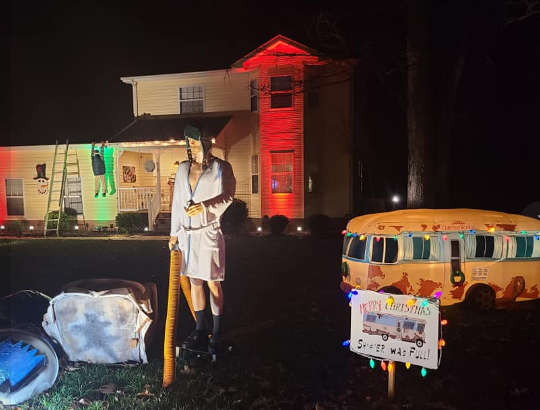 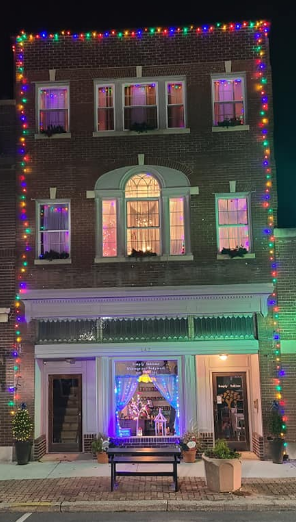 (From Pocomoke Recreation Committee Facebook page)
Posted by tk for PPE at 12:01 AM No comments:

1889  ..  The holidays in Onancock have passed quietly and pleasantly.

1940  ..  (Picture) The early years of one of the Ocean City boardwalk's most enduring attractions.

1883  ..  A published history of New Town (now Pocomoke City) tells about our town's social entertainment in the early and mid 1800's.

Email ThisBlogThis!Share to TwitterShare to FacebookShare to Pinterest
Labels: Christmas

The Night Before Christmas In Pocomoke City!

"Ho, Ho, Ho, Next stop is Pocomoke City"
Twas' the night before Christmas
And throughout Worcester County
Children were snug in their beds
Awaiting Santa's good bounty.

The Eastern Shore hour was late
When all should be sleeping.
But to no one's surprise
Some sure were peeping.

The jolly ol' elf isn't far away
They all knew.
Maybe he's in Accomack, Somerset,
Or Wicomico, too.

They hoped that with decorations
Making everything pretty,
Santa certainly would visit
Pocomoke City!

Then from Second Street Extended
To Stockton Road,
Santa's sleigh was spotted
With all its good load.

And from the river bridges
To the Virginia line,
He made all his stops
Hoping to make everything fine.

All the children were sure
That when they awoke,
They would find good things
Left by Santa in Pocomoke!
Posted by tk for PPE at 5:34 PM No comments: 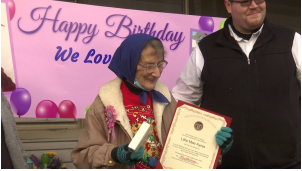 "She deserves this and so much more:" Pocomoke family gives woman 90th drive by birthday surprise - 47abc (wmdt.com)

The city of Pocomoke is participating in the Maryland Department Of Health's #MasksOnMaryland campaign. We want to see your masks! Inbox us a picture on our Pocomoke City Facebook page & your reason to mask up. 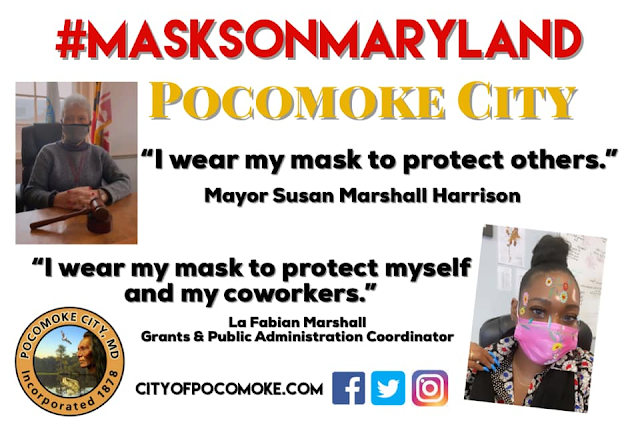 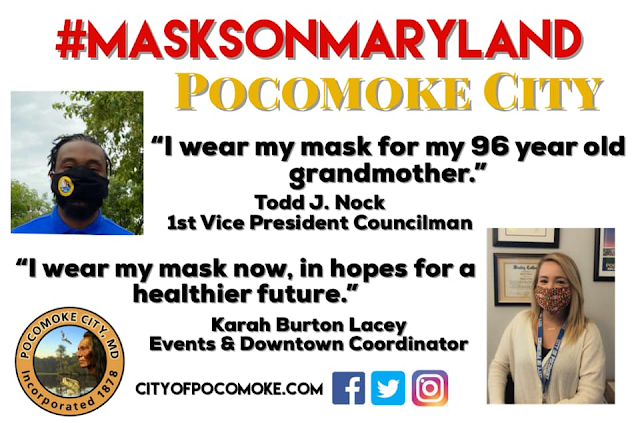 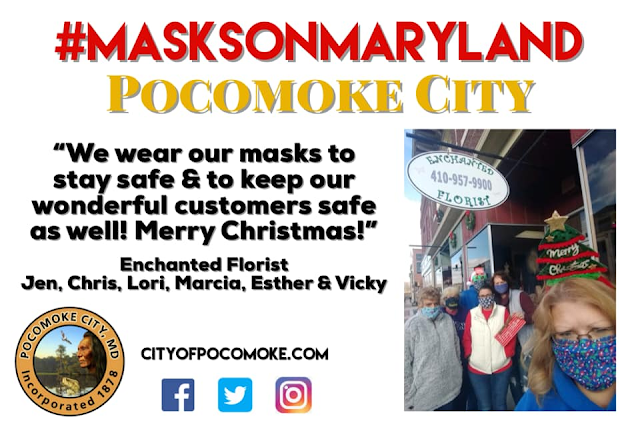 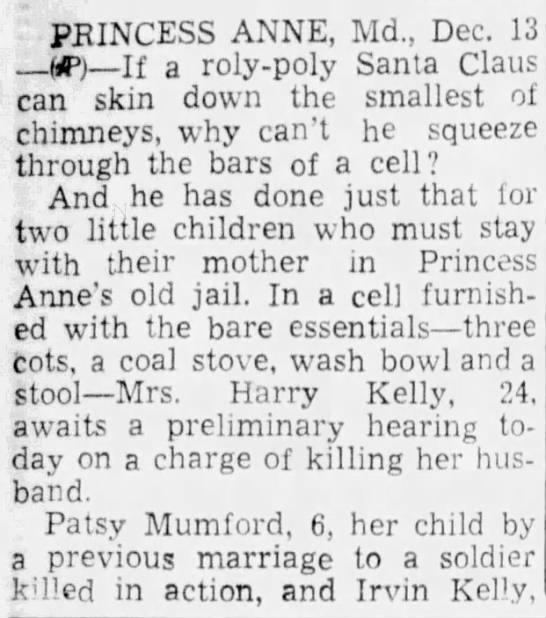 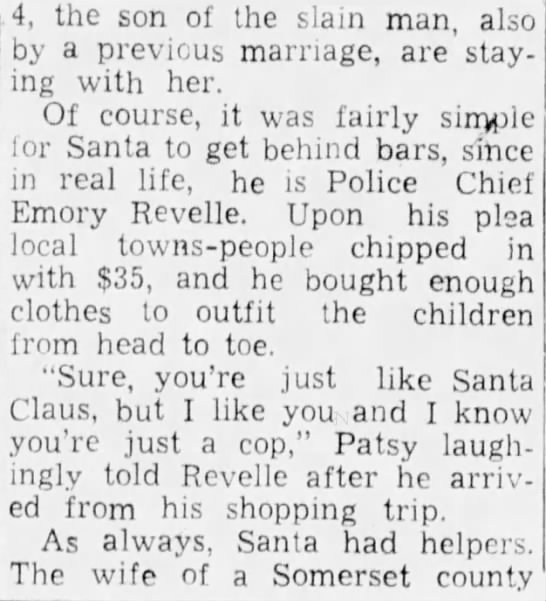 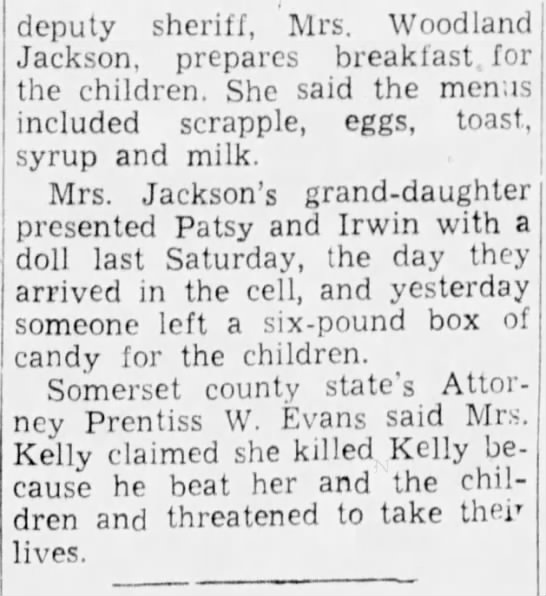 The Bradenton Herald (Bradenton, Fl)
Footnote: Below is a follow-up article published in April, 1946 in the Salisbury Times. 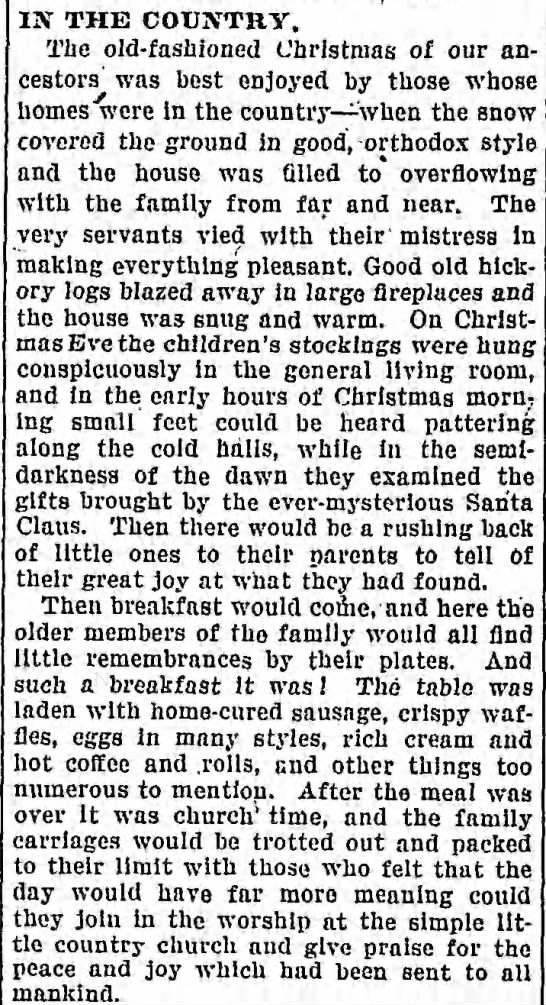 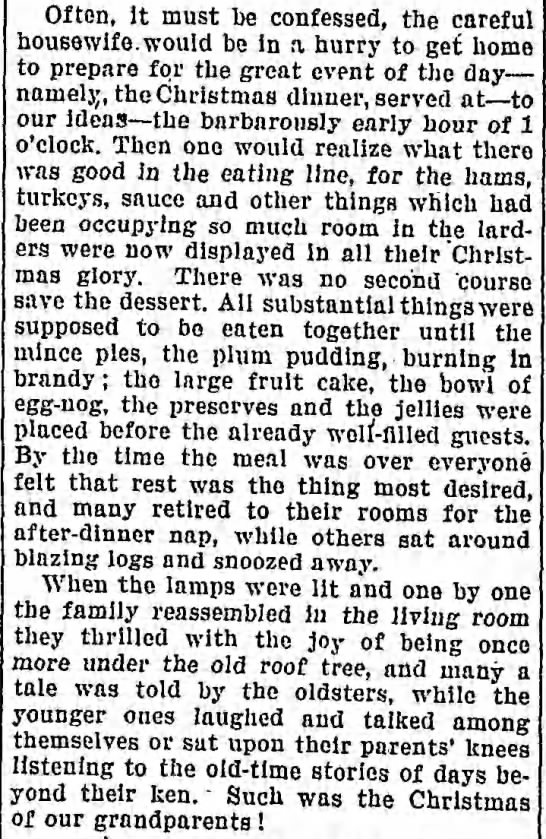 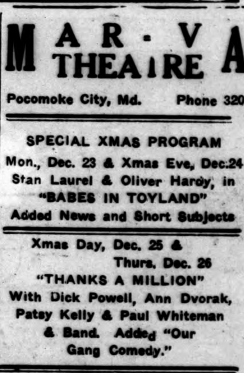 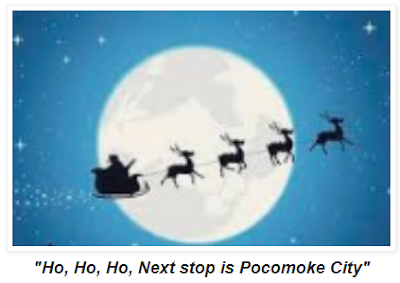 (Read more about it this Wednesday here at The Pocomoke Public Eye.)

1945  ..  The spirit of Christmas is evident at the Somerset County Jail in Princess Anne with Santa visiting there to spread cheer to two children of a woman prisoner (and a follow-up article on what happened when the charges against the woman were brought before the grand jury).

1906  ..  A writer looks back to old fashioned Christmas's in the country from yet an even earlier time.

1937  ..  From the Eastern Shore to across the bay Marylanders are aiding Santa to prevent empty stockings. 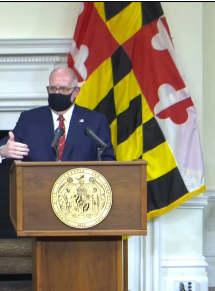 ANNAPOLIS, Md. (AP) - Maryland Gov. Larry Hogan on Thursday urged state residents to stay home for the holidays to help stop the spread of COVID-19, and also announced a new $180 million relief package to help businesses and people affected by the pandemic.

The governor issued an emergency order to limit travel to essential purposes only. 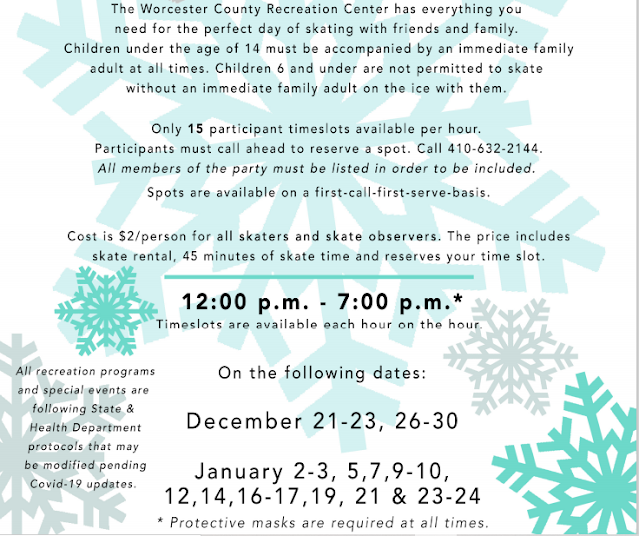