From the perspective of the "modern" Pocomoke City of 1939 a look at how our town used to be prior to that time is recalled.

It's this Sunday here at The Pocomoke Public Eye.

A Colorful Fall Event At The Marva 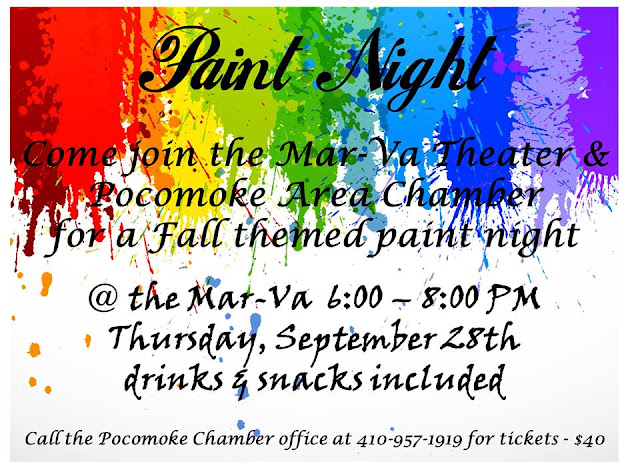 TIME MACHINE: The Early Days Of Television On The Eastern Shore. 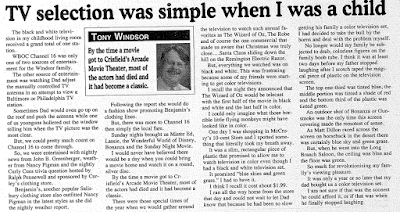 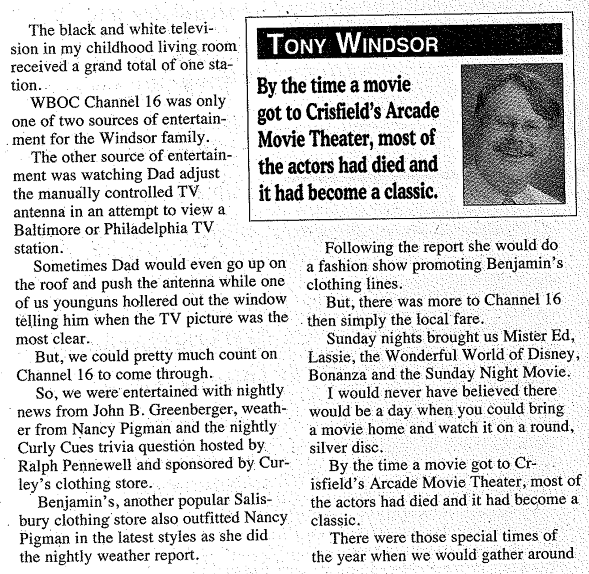 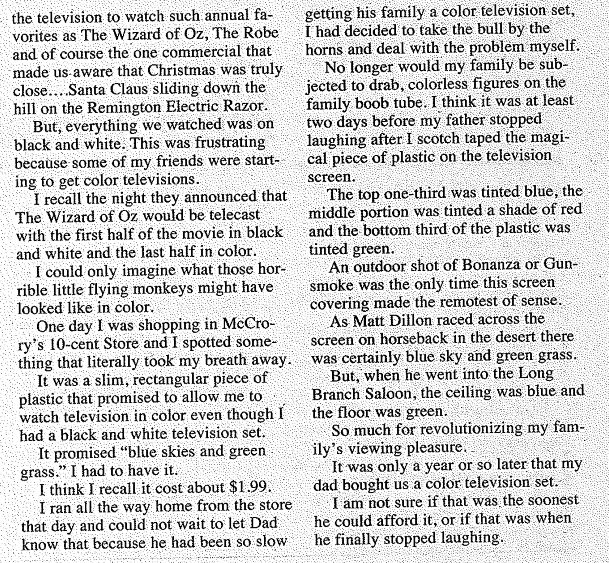 Prior to local television arriving on the Eastern Shore, TV viewing was quite a novelty for those who owned a television set and the friends, neighbors, or relatives whom they invited for a visit to watch TV.

It didn't matter so much what the program was but whether reception was available.  Those were the days prior to a local TV station or cable/satellite service and a VHF antenna on your rooftop was your TV's connection..maybe.. to a signal from Baltimore, Washington, Philadelphia, Norfolk, or sometimes Richmond.

Occasionally there would be a clear picture coming in on one or more of the available channels.  In these rather rare instances a telephone call might go out to those without a TV (and these folks were in the majority) to come over and watch. There was no certainty, however, that the picture would still be there when the visitors arrived.

Sometimes reception was simply not viewable at all; at other times there was a viewable, although "snowy" picture but you couldn't count on it to last. Reception might fade during the last five or ten minutes of a program, leaving the viewer without a clue as to the program's ending.

Depending on the location of the originating signal the rooftop antenna would have to be adjusted to point toward the geographical location of the signal source. My dad would go outside our home in Pocomoke and turn a hand crank, similar to an awning crank, to point the direction of the antenna while he was watching from outside through the living room window to monitor the reception. We would assist by communicating to him from inside.

We eventually graduated to the luxury of a motorized antenna. You simply turned a knob on a little box that sat on top of your TV to the direction you desired your antenna to point.

Television was gaining popularity around the country and here on the lower Eastern Shore hopes for the availability of a clear, dependable picture were raised with word in 1953 that Salisbury's WBOC (radio) was making plans to put a UHF television station on the air, and that came to fruition on July 15, 1954. 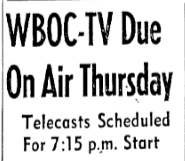 John B. Greenberger delivered the first newscast on WBOC-TV.

Standard TV sets were equipped to receive VHF channels 2 through 13.  The new UHF (Ultra High Frequency) technology was broadcast on channels 14 through 83.The Salisbury station was operating on channel 16. So if you wanted to tune in you needed a UHF converter box (first ad below) as well as an antenna that could receive a UHF signal.  New TV's (second ad below) began to include the UHF channels in their sets. 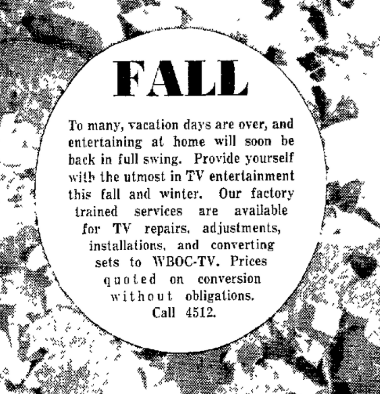 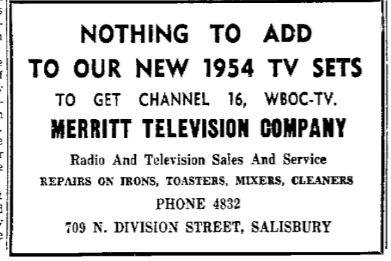 For the Eastern Shore's new television station it was a learn-as-you-go experience as the new operation got underway.  Radio announcers found themselves in front of TV cameras. Sometimes the viewer would see a member of the studio crew inadvertently walking in front of a camera. Technical and other staff found themselves dealing for the first time with this new venture.. television. 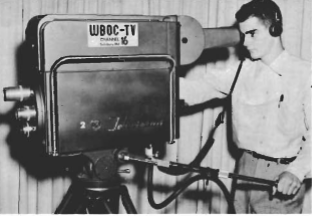 **The trio of Ralph Pennewell with weather, John B. Greenberger with news, and Ron Weber with sports ("Good evening sport.. you, too, mam") holding rein for many years. Weather, sponsored by Atlantic gasoline, lead off at 11PM with their musical jingle, "For business, for pleasure, in any kind of weather, Atlantic Keeps Your Car On The Go."  Ralph wore an Atlantic service station uniform for the weather presentation, and during the 5-minute program he drew the weather fronts on a paper outline map of the U.S. 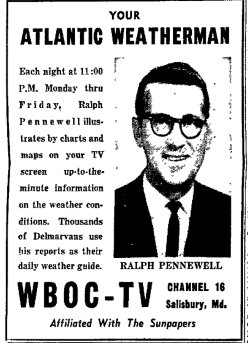 **During the early years Claire Beach, Nancy Allen, Carol Lee Anderson, Nancy Pigman ("Weather Fashions" sponsored by Benjamin's ladies apparel store), and Ann Gladding from Pocomoke were among those who presented the weather during the 7PM evening news.  In later years Kelly Rouse was a weather host for her sponsor- Wharton & Barnard auto supplies. Later, Kelly went on to a long career in local television news at WMDT and then at WBOC.

**Club 16," a live production from the studio each weekday evening, was hosted by staff announcer John Rahe. 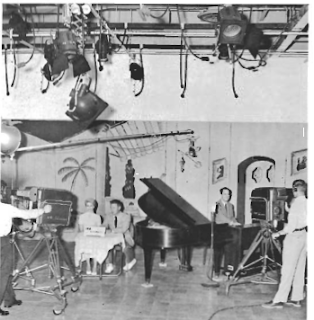 **Poultry auctioneer Carol Long, leading off his program with an auction chant, had a daily evening report on the day's activity at the Selbyville poultry auction exchange. 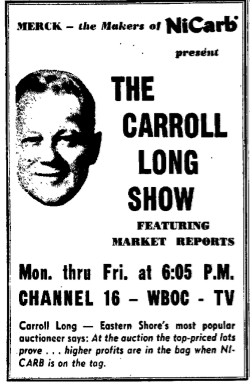 **At Christmas time the Jolly Jack show, sponsored by the White & Leonard store's "Jolly Jack's Toyland," was popular with the youngsters.

**For many years The "Miss 16" contest selected a 16-year-old young lady to represent the station for a year, along with winning a host of prizes. 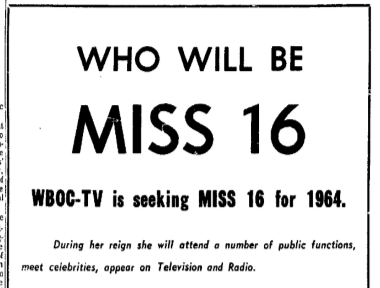 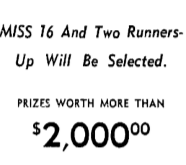 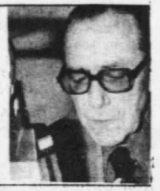 Morning and noon news updates of several minutes were not on-camera from the studio but read from an audio booth while the viewer would see a WBOC news logo on screen. 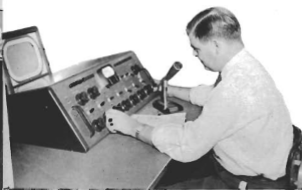 The station's art director, Ed Parsons, hand-painted material used for commercial ads; it was long before the age of computer graphics. He designed the in-studio sets for local programs. At election time he'd prepare the visual materials needed for the presentation of election results.

The Polaroid camera was a staple of the news department for covering spot news happenings. Some news events were filmed on 16mm black and white film and developed in the station's dark room. The newsroom staff of one full time member grew to three full timers by the mid-1960's (today's news staff numbers in the dozens).

Sometimes commercials were broadcast live from the studio.  A classic recollection that was passed along by veteran employees from that early era of local TV recalled the demonstration of features of a new refrigerator. Everything went well at rehearsal.  But when the announcer opened the refrigerator door during the live on-air broadcast during the 11PM news, inside the refrigerator to his surprise and for the viewers to see..... was a boot!  The fellow co-workers of the prankster who pulled this off remained tight lipped and his identity was never known to management which would have had a strong reprimand, or maybe worse, in store for him.

And so goes a glimpse of the early days of TV on the Eastern Shore.


When you're clicking around the Internet remember to check in with The Pocomoke Public Eye.  We strive to be a worthwhile supplement to your choices.
Posted by tk for PPE at 6:00 AM 2 comments: