Count To Ten And Continue On... 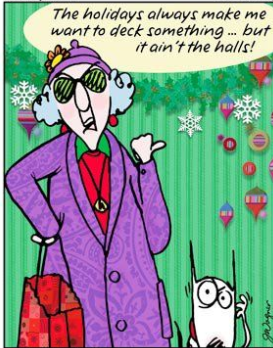 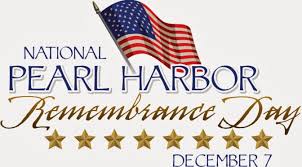 Various news media this week have reported on a 1931 mob lynching that occurred in Salisbury (i.e. http://www.wboc.com/story/39588284/memorial-marks-87th-anniversary-of-williams-lynching-in-salisbury).  The local news media of 1931 perceived metropolitan newspaper coverage of the event as unfairly connecting all Eastern Shore citizens to the ilk of mob rule.  What follows is the text of first-hand recollections by the late Charles J. Truitt who was editor of The Salisbury Times in 1931.

*********
"On Friday, December 4, 1931, Daniel J. Elliott, a highly respected Salisbury lumber dealer, was talking over the telephone in his office about mid-afternoon when Matthew Williams, a negro he had employed for eight years walked in from behind shot Elliott in the head. Death was instantaneous.

Williams, wounded when arrested, was taken by city police to the hospital where he was questioned by State's Attorney Levin Claude Bailey.

A report was spread around Salisbury that Williams had told the state's attorney a dozen or more Salisbury business men had been marked for death, that each had been assigned to a black for assassination and that 'I've done my job and I was the only one that did.'

About 8:30 that night a group said to number 12 to 15 appeared outside the ground floor hospital ward where Williams was lying in bed. He was smuggled out through a window and walked three blocks to the courthouse lawn. There he was hanged from a tree.

My wife and I had planned to see a movie at the Arcade Theater after dinner. As we walked along the block of Main Street toward the theater I was told of the alleged conspiracy against certain community leaders, which I completely discounted. After sitting in the theater for a time, I decided I should, as a newsman, investigate what may be happening outside. As I walked the half block to the office a passerby, replying to my inquiry about a gathering at the Main and Division Street intersections, said Williams was being hanged. Upon reaching the office door I thought I could discern in the darkness a shadowy figure dangling from a tree on the south side of the courthouse lawn. I hastened back to the theater to tell my wife, who was expecting soon, not to leave her seat until I returned.

I then went to the street intersection across from the courthouse lawn. With only street lights for illumination, I estimated the crowd to be about 100. Someone said Williams body was being taken away. There was no mob shouting as reported in some newspapers. Rather, the gathering appeared to be one of awe-struck spectators, rendered silent by the nature of the spectacle some of them had just witnessed.

As expected, for the next several days the Eastern Shore was the object of editorial page lingual gymnastics in a sizable sector of the metropolitan press. The most volative vituperation appeared in The Evening Sun, which then author, Henry L. Mencken, titled 'The Eastern Shore Kulture' :

Not many observant Marylanders, I take it, were surprised by the news of last Friday's extraordinarily savage and revolting lynching in Salisbury. Something of the sort has been plainly hatching down in that forlorn corner of the State for a long while. The whole area is a lush stamping ground for knavish politicians, prehensile professional patriots, and whooping soul-savers. It is quite naturally, a stronghold of prohibition (and of the rot-gut liquors that go therewith), and within its bounds tin-poy revivalism is making its last stand in Maryland.

Another vitrolic blurb appeared by Mencken in the same newspaper a week later. His statement that every schoolboy knew the identity of those who had participated in the hanging of Williams, brought an immediate chorus that he be summoned before the grand jury to testify. His response was that he would not voluntarily appear and the matter was dropped there.

Meanwhile Eastern Shore newspapers, editorially asserting mob action was not to be condoned, took issue with Mencken. The Cambridge Daily Banner recalled that Mencken himself had advocated lynching when he once proposed to take Williams Jennings Bryan 'to the top of the Washington Monument, in Washington, disembowel him and hurl his remains into the Potomac.' A somewhat similar charge was leveled by the Worcester Democrat, of Pocomoke, edited by a retired college professor. The Maryland & Herald, Princess Anne, referred to Mencken and aids as being affiliated with 'anarchists and communist groups, composed for the most part of men and women from the lowest strata of the mongrel breeds of European gutters.'

Attorney General William Preston Lane came to Salisbury and was closeted for four days with State's Attorney Bailey, and his law partner Hooper S. Miles, questioning a queue who might establish identity of the leaders. No clues were found that could justify convictions. The calibre of those three may be considered reflection of the seriousness of the inquiry. Mr. Bailey became chief judge of the state Court of Appeals, Miles later was president of Maryland National Bank, largest financial institution in the state. Mr. Lane became state governor."

DOWNTOWN POCOMOKE AT CORNER OF MARKET AND CLARKE

BRING YOUR CAMERA AND TAKE A PICTURE WITH MR. & MRS. CLAUS! 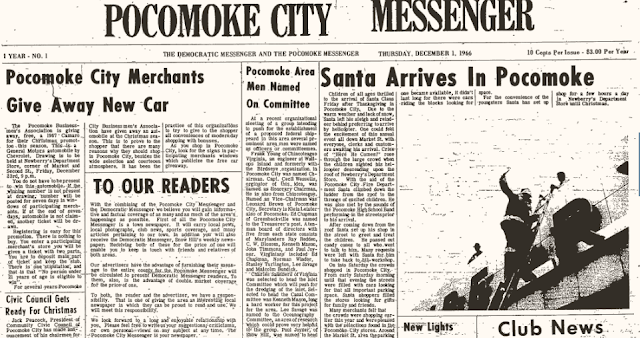 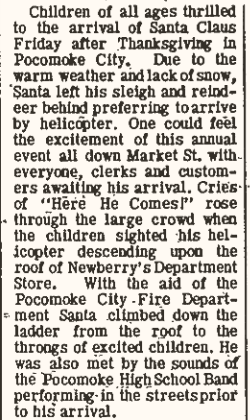 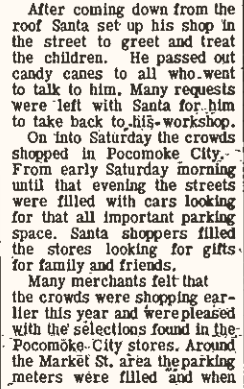 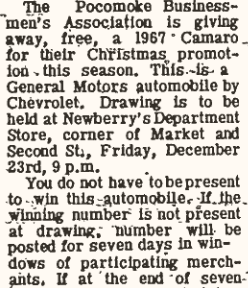 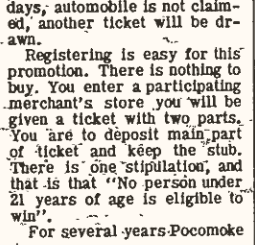 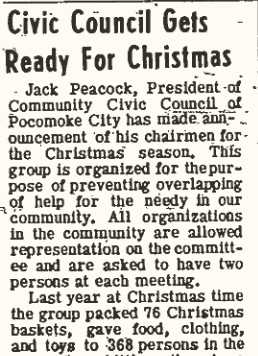 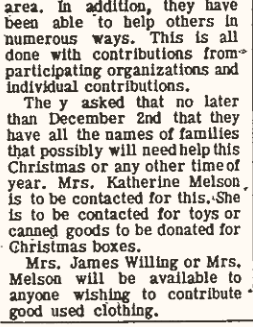 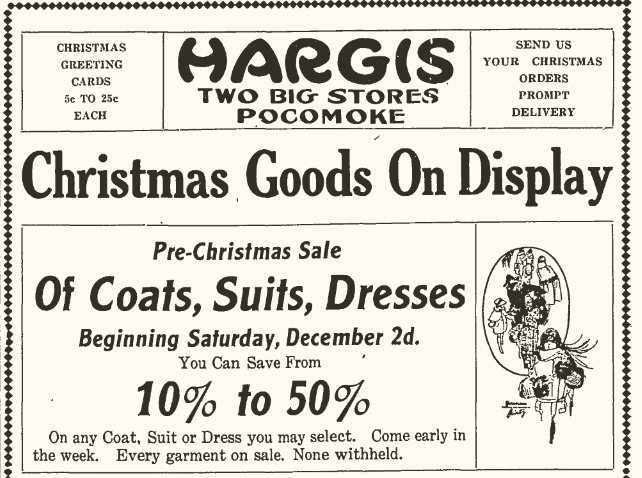 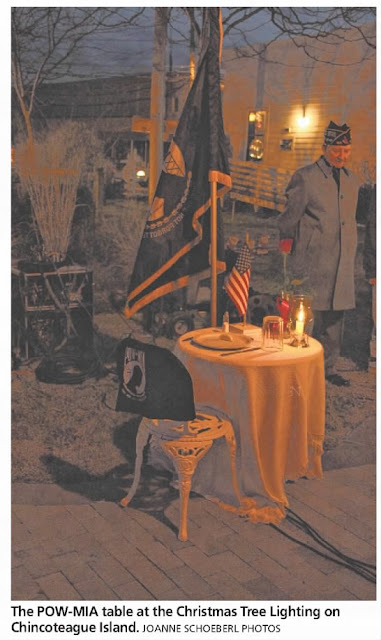 Do you have a local memory to share with PPE readers or something of interest your parents or grandparents told you about? Please send to tkforppe@yahoo.com .
When you're clicking around the Internet remember to check in with The Pocomoke Public Eye. We strive to be a worthwhile supplement to your choices.
Posted by tk for PPE at 6:00 AM No comments: