Due to possible inclement weather Saturday's (9/26) event has been rescheduled. 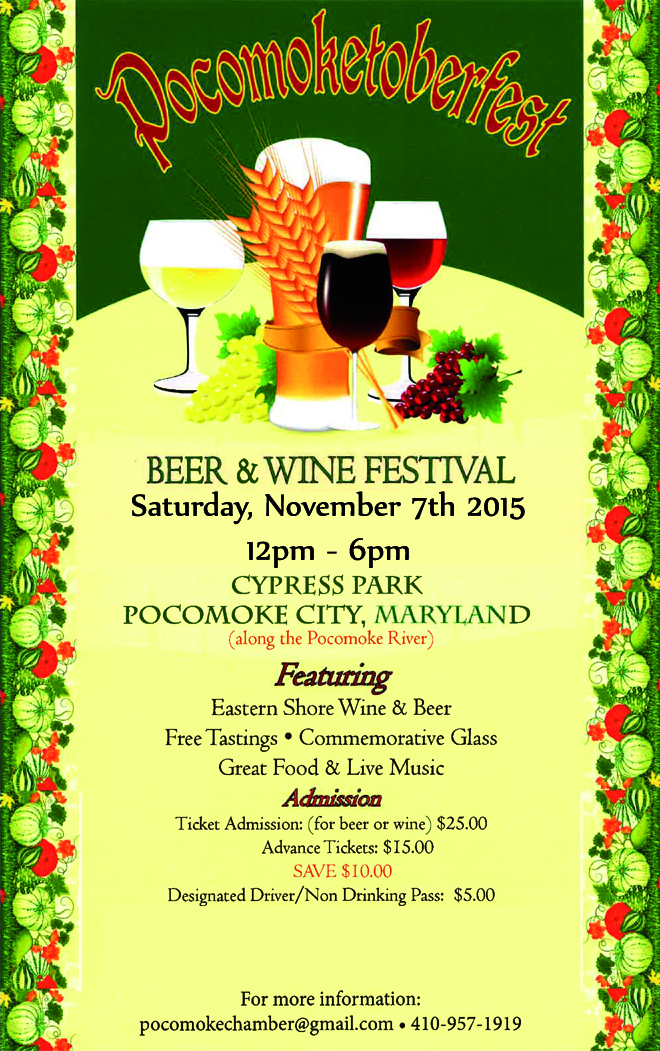 (excerpt from The Dispatch, Ocean City)

OCEAN CITY — Thirty years ago this weekend, Ocean City Councilman Dennis Dare was a young city engineer for the town of Ocean City.
The year was 1985, and Dare and other town officials got word that a Cape Verde-hurricane called Gloria had taken a sharp turn in the Atlantic Ocean and was churning with increasing force toward the East Seaboard.
When the hurricane passed by on Sept, 27, it left behind significant damage including the destruction of the majority of the resort’s famous Boardwalk. Gloria quickly went into the record books as one of Ocean City’s benchmark storms.

Full story at  http://mdcoastdispatch.com/2015/09/23/it-was-a-real-disaster-area-hurricane-gloria-remembered-30-years-later/
Posted by tk for PPE at 5:54 AM No comments:

Email ThisBlogThis!Share to TwitterShare to FacebookShare to Pinterest
Labels: hurricanes

Asking for your prayers

I'm going to ask everyone who would to please keep my father in prayer. My father, Tom, created The Pocomoke Public Eye and has poured himself into it over the past several years until a few months ago when his health started to decline. Monday morning he was transported to Peninsula Regional Medical Center and admitted to PCU due to some health complications. His blood pressure has been as high as 210/110. As of right now he is out of PCU and in a regular room and his blood pressure is more under control, but he faces many more obstacles with his kidneys and liver function. As a Pastor, a Christian, and his son, I'm believing that God can and will do a miracle in his life and will be restored better than he was before. I'm asking to those to please pray for him. My family and I greatly appreciate it!

Please allow me to provide a general response to all those from across the State, as well as from Pocomoke City, who have sent the form email to our City Clerk regarding the termination of employment of our former Chief of Police. I will address the points raised by paragraph as presented in the emails.
1. The characterization of the “firing as “unlawful” is a matter of legal opinion, and has been expressed without knowledge of the facts; which facts the City is prohibited by law from providing. I will say this – no one has been fired, disciplined, etc. on the basis of race, or for filing an EEOC claim, or for assisting others in filing an EEOC claim. I am often surprised that folks want to jump to conclusions because someone else says it is so, rather than waiting for the process to play out. Believe me; if it were legal to tell you why Chief Sewell was fired, I would be first in line to do so. You might also ask yourself this question, if the City is so racially negative and motivated, how is it that Chief Sewell ever became the City’s first African-American chief? Also, the statistics do not support the claim that crime is down overall in Pocomoke City. Although acceptance in the community is a significant factor, being a Chief of Police requires more than just being popular in any community.
2. The only type of meeting where a discussion of an employee’s performance and action to be taken is at an administrative function or closed session. Although a technical violation of the Act may have occurred (not admitting same), the notice to be provided, again as provided by law, would and could not have named Chief Sewell. That is part of the protection offered all employees when it comes to personnel matters.
3. On a personnel matter, it was not necessarily so that a vote was required to be taken in public, only that it be reported. Everyone is aware that the vote was 4-1, with Councilwoman Downing the only vote opposed to the termination. The law does not permit the “explanation” referred to in the emails. To “explain” would be to “reveal.” We simply cannot join the public into the personnel matter process. Why there is the continuing doubt over this proposition is beyond me.
4. Regarding the issue of asking media to leave the room, the Mayor has many times, contritely, taken responsibility for his mistake. I note that the email notes that “hundreds” of citizens came to express concerns. If you heard the Mayor, he asked some media to leave to make room for the citizens. Not a legal excuse, but a well-intentioned motivation.
5. I, too, stand for transparency in the government process. I have provided many government clients over the years with open meetings, public information, and ethics training. My contract and resume will soon be posted on our web page. Although I was not employed by the City at the times these actions were taken, I am satisfied that the firing of Chief Sewell was warranted and legal, and was not done in violation of his, or anyone’s, rights. I trust that the public will give Chief Harden an opportunity to move us forward.
Ernie Crofoot. 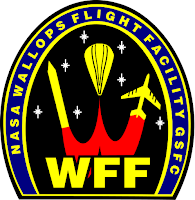 Join us at the NASA Wallops Flight Facility Visitor Center as we watch a total lunar eclipse! Telescope and binocular viewing will be available weather permitting.

This total lunar eclipse will be visible from most of North America, South America, Europe, west Asia and parts of Africa will be able to see the eclipse. The eclipse will last for 3 hrs and 20 mins from beginning to end. The Moon will be totally eclipsed (totality) for about 1 hr and 12 mins. 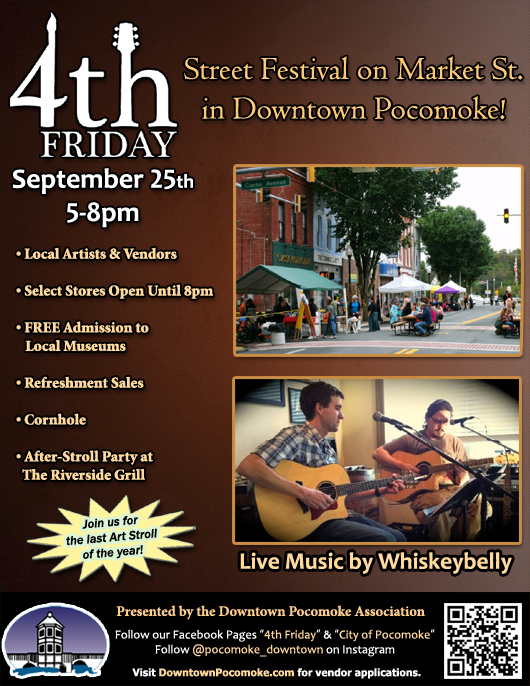 After President-elect Grover Cleveland made a visit to the Eastern Shore of Virginia's Hog Island for a duck hunting vacation an 1892 American Press Association article was published about the island. The following information is gleaned from that article:

Hog Island was still inhabited at that time, with twenty-one families living there. Workers were employees of the government and a sporting clubhouse named Broadwater Clubhouse, and oystermen.

"Every man and every half grown boy can sail a boat, and the people are as near amphibians as they can well be without having web feet."

"The United States government has vainly essayed to give Hog Island the more euphonious name of Broadwater, but the name Hog Island sticks and the island figures thus upon the official election returns of Virginia.  Hog Island cast thirty-one votes for Mr. Cleveland and none for any other candidate.  That is the usual Democratic majority of the island, and the vote is so easily counted that although the ordinary method of reaching the mainland is by open sailboat the Hog Island returns are usually among the first to come in."

"Oysters, diamond backed terrapin and water fowl of many sorts swarm about Hog Island, and its neighbors. --  There is some attempt on the part of Virginia to protect the diamond backs, but restrictions upon the pursuit of game are not popular among the islands, and terrapin are caught and eaten whenever they are fit to eat.  They are never cheap, even within a few miles of their feeding grounds, and  they easily fetch from fifteen dollars to twenty-five dollars a dozen at Chincoteague."

"All craft at Hog Island, as along the whole coast, are flat bottoms because of shoal water.. -- The mail is ordinarily brought over to Hog Island in an open sailboat unless the owners of the clubhouse happen to be down, when the steam yacht performs the task."

"The people of the Atlantic coast islands of Virginia are as simple and kindly as any on earth.  For the most part they live generation to generation upon the islands, and the only newcomers, save on populous Chincoteague, are the government employees and the sporting stranger."

Footnote: (source: Wikipedia):  Hog Island.. "is a part of the Virginia Coast Reserve of The Nature Conservancy.  Starting in the mid-19th century the town of Broadwater, Virginia was located on the southern end of the island, but had to be abandoned in the 1930's when rapid beach erosion made its continued existence untenable.  However, many of the houses and other buildings were floated by barge to the mainland and can be found in Willis Wharf, Virginia and Oyster, Virginia."

The runner's up were Gloria Sturgis, Pocomoke City, and Emily Rae Drummond, Hallwood. There were 15 contestants.

Recalling the small tobacco shop in downtown Salisbury that, for many decades,  was the Eastern Shore's music headquarters for records... 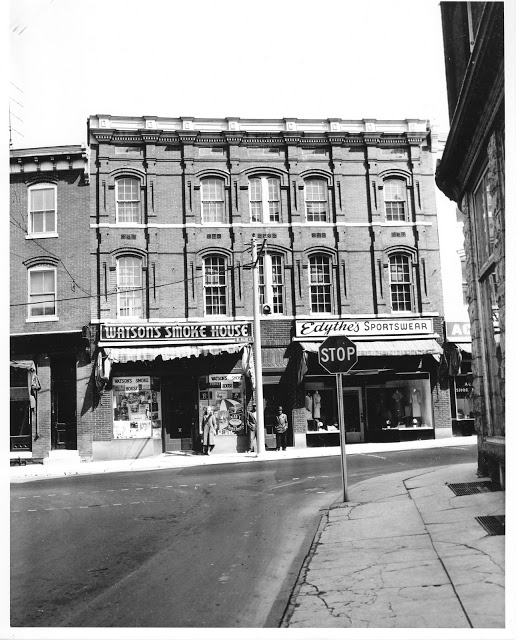 Watson's Smoke House opened in 1896 in Salisbury and remained a fixture of the downtown business district into the latter part of the 1900's.  As its name implied, its first offering was tobacco products. In later years it would become what was probably the best source on the Eastern Shore for music recordings of all kinds.  It also was a popular stop for its newspaper and magazine offerings and its soda fountain. 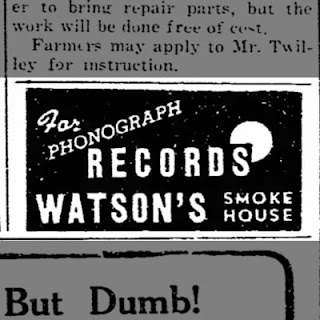 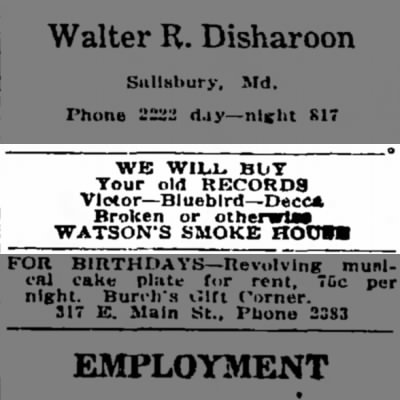 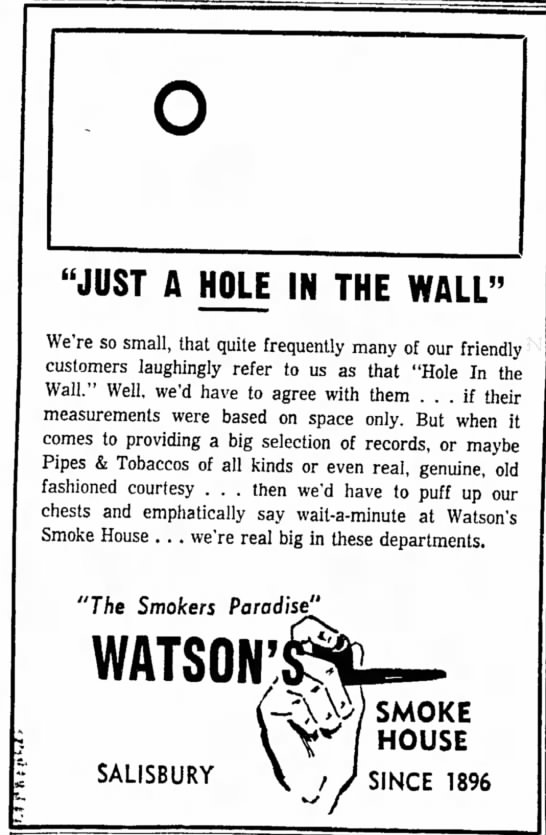 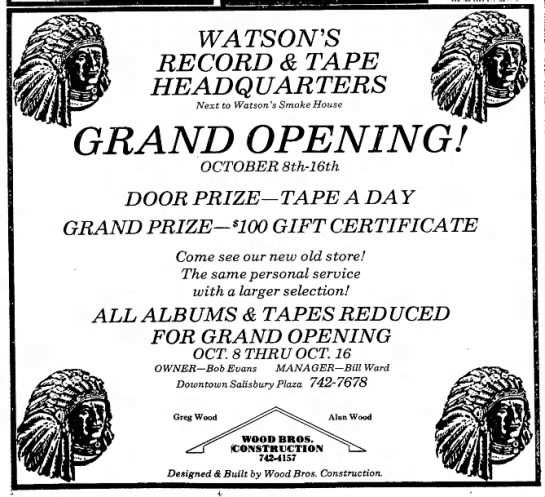 When you're clicking around the Internet remember to check in with The Pocomoke Public Eye.  We strive to be a worthwhile supplement to your choices.
Posted by tk for PPE at 6:00 AM No comments: