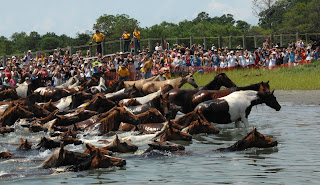 (2007 photo) CHINCOTEAGUE -- The first of an estimated 120 ponies swam ashore at exactly noon on Wednesday while a large crowd of onlookers cheered at the 85th annual Chincoteague Pony Swim.

"That's so cool," said Dawn Wagner, who lives in Point Pleasant, N.J., and Locustville, Va., and was attending her second swim with her family.

The U.S. Coast Guard set of a red flare at 11:42 a.m., signaling to an eager crowd that the slack tide had arrived and the swim was near.

The swim was the climax of a long morning spend waiting. Because the animals must swim at slack tide, when the water doesn't move, the event is time-specific.

Still, Chincoteague emergency medical technicians were called to assist at least two people who developed health problems while on one of scores of boats that lined Assateague Channel.

They were taken from the area on a stretcher.

After the ponies rest for approximately an hour in a holding pen, they will be paraded down Beebe Road and Main Street toward the carnival grounds, where the annual auction will be held tomorrow.

Spectators will line the streets for one of the Pony Penning's signature events.

But for now, the majesty and allure is on full display for a crowd of onlookers.

"Look at the lead horse," said Wagner, pointing, during the swim. "This is a good spot."