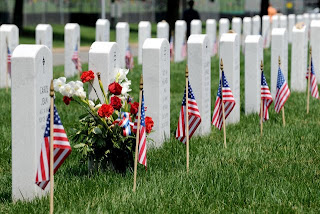 WASHINGTON (AP) - Three people were buried in the wrong graves at Arlington National Cemetery, the Army said Wednesday as it followed up an investigation into bookkeeping problems and burial mix-ups at one of the nation's most hallowed sites.

After a report issued in June found that the problems could potentially affect thousands of graves, defense officials received about 1,100 calls from worried families.

One of those callers, the widow of an Army staff sergeant, led to the exhumation of three graves late last month. The three remains in those graves, all former members of the armed forces, were found to be in the wrong place, said Gary Tallman, an Army spokesman.

"The families are satisfied that the problem was fixed," Tallman said Wednesday.

A fourth grave was opened Wednesday in a different section of Arlington. At the request of his father, the grave and casket of Marine Pfc. Heath Warner of Canton, Ohio, were opened. The site was found to hold the remains of Warner, who was killed in Iraq in 2006, Tallman said.

"We're gratified that the outcome was positive and they were able to gain some closure," Tallman said of Warner's family members.

Tallman said he was not aware of any other requests for exhumation.

The investigation into cemetery mismanagement marred the reputation of one of the nation's best-known burial grounds. Army Secretary John McHugh announced that the cemetery's two civilian leaders would be forced to step aside, and appointed a new chief to conduct a more thorough investigation to sort out the mix-ups.

Each year almost 4 million people visit Arlington, where more than 300,000 remains are buried, including those of troops from conflicts dating back to the Civil War, as well as U.S. presidents and their spouses and other U.S. officials.

I have visited Arlington National Cemetary. Once as a child and stood in line with my family waiting to see the grave of President Kennedy. Years later I was there as an adult and the same silence and stillness was there. Rows and rows of headstones each name a reminder of the 330,000 men and women that unselfishly gave their lives for all of us. You can't help but admire the beauty, the somberness. If each name were alive today we would receive a different account of what each experience during war time or peace. My guess it is the most respected cemetary and most cared for in America. As it should be. So HOW does this happen??? And more importantly WHY? Don't we care anymore? Is there no such thing as respect? 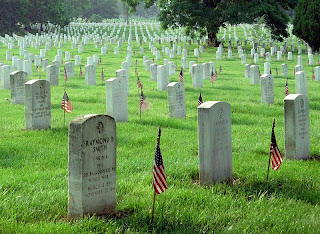 The Army ousted top supervisors of Arlington National Cemetery in the wake of a blistering report that found some graves had been mismarked and that raised questions about the Virginia burial ground's management, officials announced Thursday.

"That all ends today," McHugh said.
The inspector general, Lt. Gen. R. Steven Whitcomb, found one case involving personnel killed in Iraq or Afghanistan. In that instance, two grave markers had been switched. Other cases involved areas of the cemetery used to inter personnel from earlier conflicts.

There are 330,000 bodies buried at Arlington, including Presidents Kennedy and Taft. As many as 30 funerals are held there each day, some for veterans of past wars and others for military personnel killed in Afghanistan or Iraq.

The extent of the problems at one of the nation's most venerated memorials was not entirely clear. In some cases, grave markers had been knocked over and not properly replaced, the report said. Other reported cases involved poor record-keeping. Whitcomb said there was no indication of mistakes at the point of burial.

But in one incident described in the report, a cremation urn with the remains of an Air Force master sergeant, who served in Vietnam and died in 2007, was buried above the casket of an Army staff sergeant.

The report also found that some cremation urns were mistakenly disinterred and moved to an area of the cemetery where excess dirt was held. One such set of remains had to be reburied as "unknown" because the urn was unmarked, the report said.

Explaining how gravesites could be disturbed, Whitcomb said cremated remains often had been removed to accommodate the burial of another family member at the same site, a permitted practice. But in some cases, the urns appeared to be improperly handled by cemetery workers or officials. 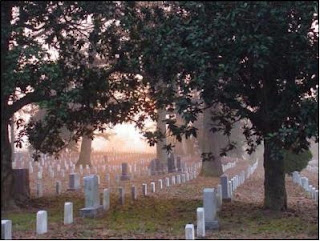 The problems at Arlington were raised in a series of reports by the online magazine Salon and in other publications. Those reports, as well as relatives' complaints and employees' concerns, prompted the inspector general's investigation, which began in August.

Respect for the country's war dead is a top military priority.

"Of all the things in the world, we view this as a zero-defect operation," Whitcomb said. 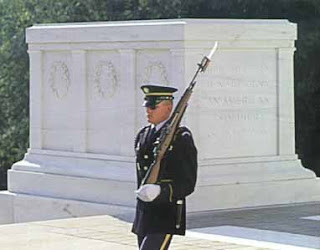 "The intent of the steps I have ordered today are designed to make sure things are done absolutely correctly from this day forward," McHugh said.

Cemetery Supt. John Metzler had announced last month that he intended to retire July 2. His exit, officials said, was the result of pressure from Army officials.

McHugh made public a brutal letter of reprimand filed against Metzler this week. In it, McHugh held Metzler responsible for the cemetery's problems and for systemic shortcomings that continued for years.

Paul Rieckhoff, founder of Iraq and Afghanistan Veterans of America, said members of his organization were "concerned and outraged" by the inspector general's findings.

"It is absolutely unacceptable that something like this would happen at America's most sacred burial ground," Rieckhoff said. "We expect swift action from the Pentagon and the administration."

The White House weighed in too.

"We have no more solemn commitment than to respect the service and the memory of those that died in service to preserving our freedom as a country," Press Secretary Robert Gibbs said.