Helping our country’s wounded warriors is a cause we care deeply about. That’s why we are asking Cracker Barrel guests from across the U.S. to join us in supporting Wounded Warrior Project. For every picture you submit, we’ll donate $1 to Wounded Warrior Project, up to $35,000.
Here’s how you can help. Go to the front porch at any one of our Cracker Barrel locations or even your very own and take a picture.

Be sure to:
After taking the picture, come back to this web page and upload it by clicking on the button below. You can also email the photo to porch@crackerbarrel.com.
Posted by jmmb at 1:04 PM No comments:

Electric Vehicle Chargers To Be Offered At Cracker Barrel

Cracker Barrel Old Country Store In,. has launched a pilot project in which it will install Blink electric vehicle chargers, provided by Ecotality Inc., at 24 restaurants across Tennessee.

The pilot is part of a broader effort by Ecotality, based in Tempe, Ariz., to get charging stations in more places across the country. The lack of charging stations, along with the high cost of vehicles, are major hurdles to the spread of electric vehicle technology.

Cracker Barrel restaurants are mostly located near major highways where travelers can get to them, and back on the road, easily. Ecotality said this makes them an ideal fit for the charging stations. About 40 percent of Cracker Barrel guests are travelers. 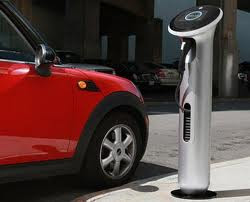 Guests will be able to get a full charge in less than 30 minutes at 12 DC Fast Charging stations. Chargers at the other 12 locations will take longer, but the companies didn't say how long.

There will be a charge for the service, but the prices haven't yet been set, Cracker Barrel spokeswoman Julie Davis said Tuesday.

The chargers are expected to be installed over a few months starting next spring.

Through its EV project, Ecotality will oversee the installation of 15,000 charging stations in 16 cities and major metropolitan areas in six states and the District of Columbia. The project will provide infrastructure to support the deployment of 8,300 electric vehicles. The project is funded through a federal stimulus grant of $114.8 million. The grant was matched by private investment, bringing the total value of the project to about $230 million.

Cracker Barrel, based in Lebanon, Tenn., is also shelling out an undisclosed amount of money to help with installation of its chargers and to upgrade transformers.