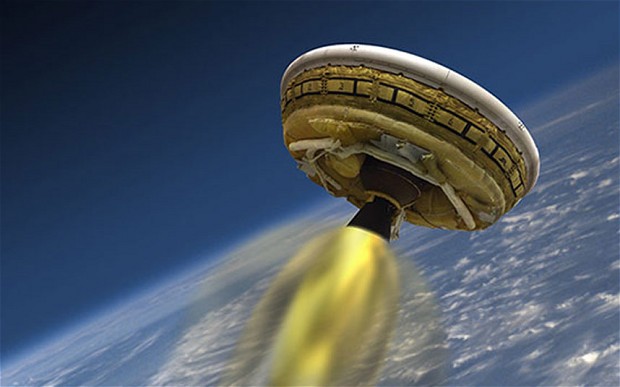 
No, this is a saucer-like vehicle now being tested by NASA for possibly delivering astronauts to Mars.

First Stage Of Taurus II Rocket Has Arrived At Wallops

WALLOPS -- The 90-foot-long first stage of Orbital Sciences' Taurus II rocket has arrived at the NASA Wallops Flight Facility after a journey that began Oct. 8 in Ukraine, continued across the Atlantic Ocean to Wilmington and finally traveled Delmarva's highways to Wallops.

A team of Ukrainian rocket engineers arrived at Wallops Flight Facility last month in advance of the rocket stage and will be working there on the Taurus II project.

Orbital Sciences was one of two companies awarded a NASA contract for missions to take supplies to the International Space Station after the space shuttle program ends. NASA, in December 2008, awarded the company a $1.9 billion contract for eight missions. 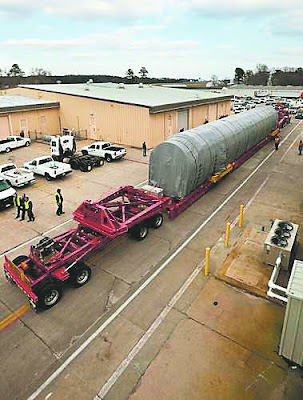 The first Taurus II mission, under a NASA Commercial Orbital Transportation Services agreement, will be a risk reduction test flight, followed by a demonstration mission to show the vehicle's capability to perform the commercial re-supply missions, which are slated to begin in early 2012.

The first stage core structure is nearly 13 feet in diameter and weighs 29,000 pounds with no fuel in it.

It was transported on a 95-foot-long trailer specially designed by Diamond Heavy Haul Inc. of Shandon, Ohio -- a company that specializes in arranging transportation for unusual supersized cargo -- along Route 13 and Chincoteague Road to the NASA Wallops Flight Facility, where it will remain in the payload processing facility until a new horizontal integration facility under construction near the launch pad on Wallops Island is completed.

The stage likely will be moved to the island in January, NASA Wallops Flight Facility spokesman Keith Kohler said.

It was shipped by rail from the city of Dnepropetrovsk in Ukraine to the Black Sea port of Oktyabrsk, from where it was transported by ship to the United States. It arrived at the Port of Wilmington on Nov. 21, but transport to Wallops was delayed for nearly two weeks due to highway restrictions associated with the Thanksgiving holiday.

Two Ukrainian companies, Yuzhnoye and Yuzhmash, designed and manufactured the rocket component, which includes a liquid oxygen tank, a kerosene fuel tank, an intertank assembly and an aft bay where the main engine interfaces with the booster, according to the Orbital Sciences website.

Other aspects of the Taurus II program also are coming together around the world, including the delivery in September of the first Taurus II AJ26 engine to NASA's Stennis Space Center in Mississippi, where it is being tested before being sent to Wallops, and the production in Turino, Italy, of the Cygnus cargo modules at the Thales/Alenia Space facility.

The cargo modules will carry up to 4,400 pounds of supplies during missions to the International Space Station. The first payload fairing for the rocket was manufactured in Stockton, Calif., by Applied Aerospace Structures.