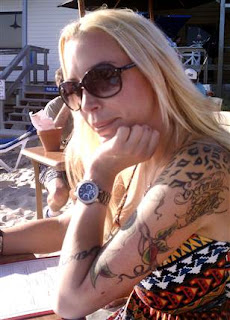 WASHINGTON - A Maryland woman is missing in Aruba, and police have detained the man with whom she was vacationing.
Robyn Gardner, 35, was reported missing Aug. 2 by the man she was in Aruba with, 50-year-old Gary Vincent Giordano of Gaithersburg, Md.

Giordano reported Gardner missing after he said she was swept out to sea on a snorkeling trip. A search by the Coast Guard, police, Search and Rescue Aruba and others turned up nothing, Aruba Herald.com reports.

Authorities detained Giordano at the airport as he was leaving the country. He's being held and accused of "involvement in the disappearance" of Gardner but not murder, says Ann Angela, a spokesperson for the Aruba prosecutor's office.

"At this moment we prefer to stick to 'involvement in the disappearance' because the investigation has to show what exactly happened, where she is now, if she's dead, if she's alive," Angela says.

Giordano will go through a series of detention hearings in which a judge will decide whether there are still grounds for him to be held in Aruba, Angela says. The next detention hearing is expected to take place this weekend, and there is no bond or bail in Aruba.

A WTOP court records search online finds a man with a similar name has been in court in Montgomery County, Md. on domestic violence charges involving two women in the past. The most recent charge against him last year lists his home address as Gaithersburg.
Gardner was last seen at the Renaissance Aruba Resort & Casino where Giordano reportedly used Marriott points to pay for the room. The Aruba Herald also reports Giordano and Gardner met on an online dating site and had a relationship in which they met up about twice a month.

Richard Forester, of Bethesda, Md., says he's been Gardner's boyfriend for 2 1/2 years, and that she's a strong swimmer. He says Gardner's official address is in Frederick, but she had lived with him in Bethesda since January. He says Gardner recently lost her job at a Bethesda dentist's office.
Forester, 41, says the couple argued before Gardner left about the nature of her trip to Aruba, and he received an email from her three hours before she was reported missing that expressed her love and said they'd sort things out when she returned.


"The last message I got from her was 'I love you,'" Forester says.
Much earlier in the day, at 2 a.m., Gardner appears to have written on Forester's Facebook wall, saying "this sucks." (Ed. note: See screenshot in photo gallery) 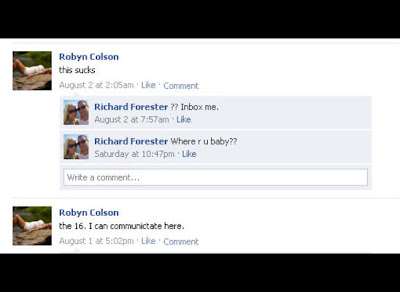 Forester also says Gardner appeared to be signed on to her Gmail account days after she reportedly had drowned, and there was no response when he tried to send her an instant message. He says Aruban authorities have Gardner's BlackBerry and iPad and are trying to access information from them.
Forester now is working with the Natalee Holloway Resource Center, which is dedicated to helping missing people. Holloway was 18 when she disappeared in Aruba in May 2005 during a high school graduation trip.