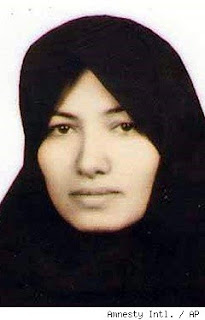 Written by, Eleanor Clift
I'm sure the Obama administration will insist that the fuel deal they are attempting to revive with Iran has nothing to do with the White House's strongly worded rebuke of the government of Iran's intention to move forward with the execution by hanging of a 43-year-old woman charged with adultery.

The favored diplomatic term is "two-tracking," but it's pretty clear that Iran's treatment of Sakineh Mohammadi Ashtiani has made her a pawn in the much bigger geopolitical fight between Iran and the West. The White House press release went out on Election Day amidst fears by human rights groups that the execution was set to take place the following day. Instead, Ashtiani is reported in "perfect health" and being held at the Tabiz prison, according to a justice official quoted by the official Irna news agency.
Iranian officials have their own version of two-tracking. They claim to not pay attention to critics of the severe sentence, saying the execution has been delayed, not cancelled. Yet they condemn the West for "trying to use this ordinary case as a pressure against our nation" in the words of foreign ministry spokesman Ramin Mehmanparast. If that's what the West is doing, so far it's succeeding if success is defined by every day that Ashtiani remains alive.

She first came to the attention of human rights groups when her stoning sentence for adultery was upheld by Iran's Supreme Court in 2007. Since then, in an apparent concession to modernity, the Iranians have altered the sentence to death by hanging, which in their culture is a gesture to show mercy.

The White House statement points to "the lack of transparency and due process" in the case, euphemisms that hardly convey the extent of the Iranian government's actions, which include arresting Ashtiani's lawyer and her adult son, who has been working to try to free his mother.
In the meantime, the Obama administration together with its European allies is trying to entice Tehran into an arrangement where it would send a portion of its nuclear fuel out of the country for processing in exchange for lifting economic sanctions imposed by the West to hinder Iran's development of a nuclear bomb. A similar deal was proposed last year and rejected by Iran's supreme leader, but the administration thinks Tehran might now be ready to accept the restrictions because the latest round of sanctions are having a stronger impact than before on the Iranian economy.
The fact that the White House waded into the controversy over Ashtiani and the government's imposition of Sharia law at a sensitive time in the ongoing negotiations suggests a bigger agenda at play in both capitals. Tehran, by backing off from what the U.S. and its European allies consider unacceptable behavior, could gain a measure of trust as it proceeds with talks that would allow it to continue its nuclear program for peaceful purposes without the burden of economic sanctions that have begun to cripple the government. If Ashtiani is a pawn in this global game, it at least keeps her alive, although in what conditions one can only imagine.
www.politicsdaily.com
Posted by jmmb at 7:20 AM 3 comments: