What the Eastern Shore Whimbrel Song Bird Has Done All Winter 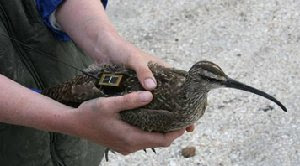 According to the William and Mary College website, Hope, a whimbrel song bird from Machinpongo that had a tracking device planted on her last spring, has just returned to the Eastern Shore of Virginia on Sunday, April 11th. Scientists have been tracking the year long journey of the approximately 15 inch bird, and were astonished that the bird traveled over 14,000 miles within the past year.

the Eastern Shore, satellite tracking showed that the bird had been on St. Croix in the U.S. Virgin Islands since Aug. 14, where she has been observed foraging on Great Pond, a Birdlife International Important Bird Area. Hope left St. Croix on the evening of April 9, flew east of Puerto Rico and northwest out over the open ocean for nearly 1,500 miles. She came near land around Cape Lookout and then followed the shoreline around the Outer Banks of North Carolina and up to the Eastern Shore, making landfall around 3:15 in the afternoon. Hope covered approximately 1,660 miles in less than two days on her trip from St. Croix.

Hope was originally captured and fitted with a satellite transmitter on May 19, 2009 while stopping over on the Eastern Shore of Virginia. She left Virginia on May 26 and flew to the western shore of James Bay in Canada. She staged on James Bay for three weeks before flying to the Mackenzie River near Alaska, and then on to the Beaufort Sea where she staged for more than two weeks before flying back to Hudson Bay. Hope then staged on South Hampton Island in upper Hudson Bay for three weeks before leaving on a non-stop flight of more than 3,500 miles over the open Atlantic to St. Croix where she has spent the winter months. In less than one year, this bird has travelled more than 14,170 miles, the CCB reports.

According to scientists, this affirms how important habitat areas such as the Eastern Shore are to migratory birds such as whimbrels.

Pictured top: Hope, the whimbrel that has traveled more than 14,000 miles in the last year.

More Information The Willam and Mary Release on Hope's Journey

www.shoredailynews.com
Posted by jmmb at 7:30 AM 2 comments: