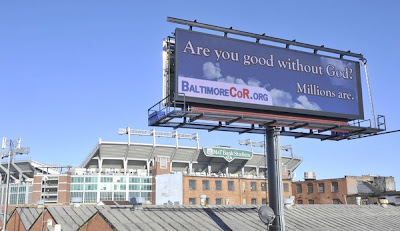 This electronic billboard near M&T Bank Stadium and three others show messages from the Baltimore Coalition of Reason, the local arm of a national campaign to bring atheists, agnostics and others together. The messages will appear through Sunday. (Baltimore Sun photo by Kim Hairston / December 1, 2009)

Teresa Cherry was out running errands when she saw the question floating over Interstate 95.

"Are you good without God?" the electronic billboard asked. "Millions are."

The Baltimore woman does not believe in the existence of a supreme being. And in that moment, she did not feel so alone.

"My friend and I were just discussing a few days ago whether or not there was a community of others like us in Baltimore," said the 28-year-old Cherry, a student at the Community College of Baltimore County. Checking out the Web site advertised on the billboard, she said, "we found out that there are some local groups, and it's exciting to me."

Which is just what the Baltimore Coalition of Reason wants. The new organization, a collection of atheists, agnostics and others, is introducing itself to the area this week with a billboard campaign aimed at reaching out to nonbelievers while telling the rest of the community that goodness is possible without godliness.

"Sometimes people have negative stereotypes or impressions about people who are atheist or agnostic," local coordinator Emil Volcheck said. "They think that just because they don't believe in God that somehow they're not good people."

Baltimore becomes the latest target of a national campaign, funded by an anonymous businessman from Philadelphia, intended to join atheists, agnostics, humanists, freethinkers and other nonbelievers - a diverse lot, not universally inclined toward organization - into something resembling a community, and one that ultimately could wield the sort of social, cultural and political power now enjoyed by the larger religious denominations.

"A lot of people who don't believe in traditional religion or don't believe in a god, they tend to think they're the only ones," said Fred Edwords, national director of the United Coalition of Reason. "And thinking they're the only ones, they tend not to communicate their feelings to others, others don't communicate similar feelings they may have to them, so they don't realize there are groups out there."

Edwords says the organization, which drew worldwide notice last spring with a bus advertising campaign in New York, will have 20 chapters nationwide by the end of the year, in small communities as well as large, in red states as well as blue. More launches are planned for the new year.

The effort comes as atheism enjoys a new vogue. Emboldened by the success of best-selling books by Christopher Hitchens ("God Is Not Great") and Richard Dawkins ("The God Delusion"), and wary of attempts to require instruction in "intelligent design" in public schools, efforts to promote religious messages on government property and other challenges to the separation of church and state, nonbelievers have grown vocal as never before.