April is Confederate Month in Virginia 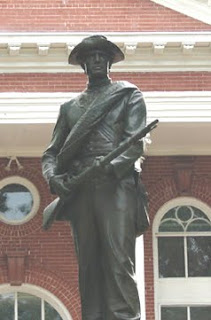 RICHMOND — Gov. Bob McDonnell has brought Confederate History Month back to Virginia after an eight-year hiatus.
McDonnell becomes the first governor since 2001 to designate April to commemorate the secessionist, slaveholding South. The last governor to do that was fellow Republican Jim Gilmore. Since then, Democrats Mark Warner and Tim Kaine refused to issue the proclamation.

"I wasn’t focused on that. I was focused on ... the Civil War history, and the Confederate army and the fact that we’ve got battlefields here, and frankly that this is going to be a very important event here next year that will promote tourism and economic development," he said, noting the 150th anniversary of the start of the Civil War.

Warner, in his first year as governor in 2002, discontinued the proclamation sought each spring by the Sons of Confederate Veterans. Before that, the proclamations were met annually with denunciations from black groups.

Black members of the General Assembly, all Democrats, said McDonnell’s proclamation was "ofensive and offered a disturbing revision of the Civil War and the brutal era that followed."

"Virginia has worked hard to move beyond the very things for which Gov. McDonnell seems nostalgic," said a statement issued by the Virginia Legislative Black Caucus.

Virginia was home to more of the war’s battles than any other state, and its Capitol in Richmond doubled as the Confederate seat of government.

McDonnell said slavery was not the lone issue contested in the war that ended with Gen. Robert E. Lee’s surrender in 1865 at Appomattox Court House, about 75 miles west of Richmond.

"There were any number of aspects to that conflict between the states. Obviously it involved slavery, it involved other issues, but I focused on the ones that I thought were most significant for Virginia," McDonnell said.

Former Gov. L. Douglas Wilder, who in 1989 became the nation’s first elected black governor, said no discussion of the Old South or the Confederacy is balanced without mentioning the human bondage it tolerated.

"You have to think back about how it allowed people to be treated as inhuman," Wilder said in an Associated Press interview. "You can’t talk about this nation, its past, without saying that war was a time when many of its people were going through the ravages of hell, quite frankly."

Wilder himself issued a decree noting the Civil War. In 1990, he designated April 7-15 the "Final Chapter of the Civil War Days," recalling "those who sacrificed in this great struggle." His proclamation praised Confederate Gen. Robert E. Lee, but it also lauded President Abraham Lincoln and Union Gen. Ulysses S. Grant.

Last year, Georgia Gov. Sonny Perdue signed a bill designating April as Confederate Heritage and History Month in that state.
www.easternshorenews.com
Posted by jmmb at 9:07 AM No comments: