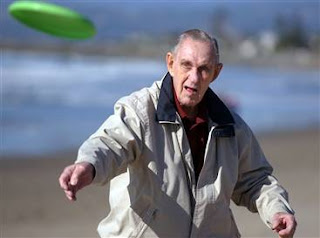 
Walter Fredrick Morrison, the Frisbee inventor, died this week. His simple sports innovation – a plastic, aerodynamic disc – has become one of the most popular toys in American history, uniting beachgoers, college kids, and competitive teams for half a century.

How did he come up with the idea? Morrison said it was easy as pie – literally. In the 1940s, he and his future wife brought cake and pie tins with them to the beach. The couple enjoyed flinging the pans back and forth, letting them glide in the California wind.

A former military pilot, Morrison applied his knowledge of aerodynamics to tinker with the tins, improving their control. Finally, in 1948, the Los Angeles building inspector began producing and selling his own discs.

Frisbee was not the original name. When Wham-O Manufacturing bought the idea from Morrison in 1957, they called it the Pluto Platter. Later, "Wham-O adopted the name 'Frisbee' because that’s what college students in New England were calling the Pluto Platters," reports the AP. "The name came from the Frisbie Pie Co., a local bakery whose empty tins were tossed like the soon-to-be Frisbee."

Frisbee went on to sell 200 million discs, inspire the sports ultimate Frisbee and Frisbee golf, and attract countless knockoffs around the world.

Morrison was from Monroe, Utah and died at 90 years old.