Customs agents at Dulles have probably seen just about everything. And it seems people use their imaginations to smuggle anything they can and want to into our country. Some will even act naive about a smuggling attempt.

Here's a drug-sniffing dog namesDemi who sniffs chocolate.....or maybe drugs. But read below the arrest Customs and Border Protection agents made on September 9.

The marijuana was headed to New York. It has an estimated street value of nearly $17,000.

Officials say the dog, named Demi, alerted for a mailbag that arrived from Mexico City. One of five boxes in the sack contained marijuana.

The marijuana will be destroyed. 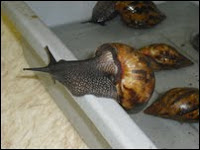 STERLING, Va. - Customs agents see foreigner travelers try to bring a lot of unusual items into the U.S., but one slimy seizure over Labor Day weekend could have been devastating to crops.

A traveler from Ghana tried to bring 14 Giant African Land Snails into the U.S. at Washington-Dulles International Airport Sunday.

The snails, which were as large as a child's fist, are said to be one of the worst invasive species in the world and have caused economic damage to crops.

The snails are known to eat at least 500 different types of plants and to reproduce rapidly. They can grow to be nearly 8 inches by 4 inches big.

The traveler declared the snails, but they had to be destroyed because they are illegal in the U.S.

Customs and Border Protection officers arrested Jose Acevedo, 41, after he arrived on board a flight from El Salvador on Thursday.

Authorities say a customs dog identified Acevedo, of Carlisle, Pa., as carrying drugs. When authorities opened the soup packets, the drugs were hidden inside some of them.

It isn't the first time authorities at the airport have seen creative smugglers. Last year officers found heroin in juice boxes and cocaine in cooked chicken.