A drought watch has been issued for Virginia as a long hot, dry spell has stunted crops, heightened the threat of wildfires and drawn down reservoirs.

The watch issued Wednesday by the Virginia Department of Environmental Quality is intended to increase awareness of a possible drought as the state heads into the statistically driest months of the year.

Recent rains have done little to ease parched conditions. Among the primary factors leading to the watch:

Eight-six percent of the state is experiencing abnormally dry to moderate drought conditions, as defined by the U.S. Drought Monitor.

Most of Virginia has recorded below-normal precipitation in the last 60 days; short-term forecasts do not indicate a change in that pattern.

Wildfire conditions are at levels normally seen much later in the summer months. Twenty localities already have issued burning bans.

Large reservoirs such as Lake Moomaw, Smith Mountain Lake, Kerr Reservoir and Philpott Reservoir have been slowly declining since June.

Virginia growers have been especially hard hit by the scorching temperatures and dry conditions. The state commissioner of Agriculture and Consumer Services said the early arrival of hot, dry conditions has been difficult to overcome.

"Normally, if you have a late drought, your crops are a little better along," Matthew J. Lohr said. "It's been weeks since we've had measurable rain."

Kevin Engel farms leased land in 14 Virginia counties. He grows corn for feed and store shelves, barley, wheat and soybeans. He said conditions throughout all his fields are uniformly bad.

"A very large majority of corn in our area will not yield anything, even if it rains now," he said. He had to replant 200 acres of soybeans burned by the sun, even though the field was irrigated.

"There's going to be quite a serious blow to Virginia's No. 1 industry this year," Engel said.

Growers who usually can depend on two hay cuts a season are looking at one now, meaning they may have to thin herds if they can't store enough for the winter months.

Even poultry farmers have reported heat stress among their birds.

Lohr said Virginia needs a steady drenching of rain to salvage some crops.

A combine caught fire in a wheat field in Melfa Sunday afternoon and destroyed roughly 40 acres of crop.

The fire started in a field off Main Street and spread toward Seaside Road. 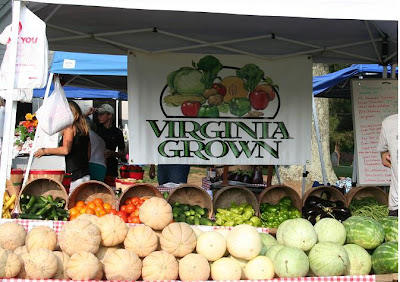 March 14 – 20, 2010 is Virginia Agriculture Week. The Virginia Department of Agriculture and Consumer Services (VDACS) suggests that it’s the perfect opportunity to give credit where credit is due. During this special week, take a minute to thank a farmer. No engraved note paper or frilly bouquets required; a thoughtful nod will do.

Of course every farmer has a lot of help, but gratitude for all of Virginia’s growers will not be misplaced. Here are a few good reasons:

Start with your breakfast cereal and milk. Consider the fruit you add, the cotton robe you are wearing when you eat it and the cut flowers that decorate the breakfast table. You can thank a farmer for these.

Add the turkey sandwich, apple, potato chips and ginger ale you’re having for lunch, your mid-afternoon peanut snack and the steak with mushrooms, fresh vegetables, crusty rolls and Virginia wine you enjoy for dinner. Kudos to the farmers who had a hand in putting all this on your table.

Outside look for newly laid sod, an array of colorful bedding plants tucked into a blanket of mulch, bird seed in the feeder and firewood stacked by the back door. A pat on the back for the farmers who helped array your backyard.

Farmers don’t ask for gratitude and none would expect it however well deserved. But it is time to thank our farmers, not only for the rich and varied agricultural bounty which provides nourishment, clothing, shelter and beauty for all Virginians, but for the intangible, indomitable spirit that keeps them going despite rough times and daunting obstacles.

And that’s not all. Farmers deserve thanks:

The benefits of agriculture extend far and wide. What starts as the growing and harvesting of food and fiber, ends up with almost everything we eat, wear and use. It’s time to thank our farmers for that.

www.virginia.gov
Posted by jmmb at 8:16 AM No comments:

Waking Up and Warming Up For Spring.......Finally!

What a beautiful day yesterday was and I found some sure signs that reassured me spring can't be far behind at all. Those snowy, blowing, frozen days of winter are meltling fast.

It's the beginning of POTATO SEASON for some farmers and for me. I love Eastern Shore red potatoes and and these guys know it!!

Always towards the end of February and into the first few days of March it becomes potato season and it's never too early for these guys. Early bird gets the worm, I suppose.........

I saw good ol' Robin red breast this morning. In fact I saw two of them hopping around in the front yard. I've always been told that when you see the Robins spring can't be far behind. Well, I never told my father that sometimes I had seen them in the cold, cold weather....... or maybe I just thought I had.

But along with the Robins come the other birds of the season. This morning I looked out and saw my favorite bird of all. The Blue Bird.

Now, I have had blue birds for years and they live in the houses I provide for them all year long and when the sun is warm they will emerge to stretch their wings.
I can tell by their chirp they are ready for the season.

So, like most of us today, the farmers are busy, I'm going to be busy outside and so are the birds. It's been a long, cold, dark winter. 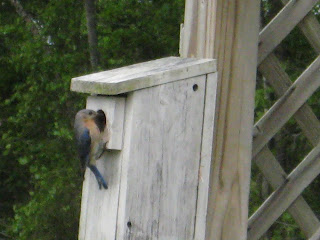 GET OUTSIDE AND PLAY TODAY!!!! 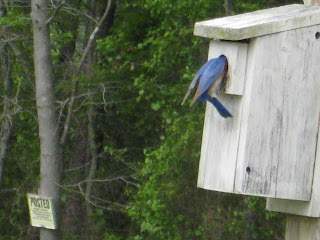 At least give it a good try.
Posted by jmmb at 9:23 AM No comments: