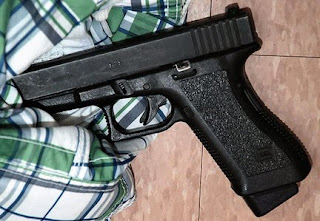 One suspect, David Dewayne Dickerson, 18, of Pocomoke, had a loaded revolver in his pants pocket when he stepped out of a vehicle that was the subject of a traffic stop, police said.

Sheriff's deputies had stopped the vehicle in which Dickerson was a passenger because they saw another man wanted on an arrest warrant for handgun possession in the car. That man, Martel Blake, 18, of Pocomoke City, was also arrested at the scene, police said.

Police said Blake had been wanted by police and had been spotted by Pocomoke City police earlier in the day, but had eluded capture. When sheriff's deputies saw Blake's vehicle on Buck Harbor Road, the Sheriff's Office said, they stopped the car and arrested both men.