Use Caution With The Wood You Burn When Camping

One of the co-workers in my daughters office expressed to her a few days ago how upsetting it was to come to the Eastern Shore to camp and have to buy firewood at the campground instead of burning your own. My daughter, always eager to protect this great Eastern Shore, explained to her the dangers of insects being brought to our local trees if you burn your own and especially if you leave unused logs behind. Not being a camper I don't know the policies of the campgrounds but this article below sure makes sense.

The shore is losing enough trees and we don't need more insects than we can handle. I'd hate to think that the wooded areas that surround me could be invaded by insects brought here by uncaring campers.

LEWES -- Invasive insects have obliterated thousands of acres of forest in neighboring states. To protect Delaware's delicate trees and forestry industry, authorities warn campers to ensure their firewood is bug-free.

Wayne Kline, chief of enforcement for Delaware State Parks, said he's telling visitors not to bring in firewood from other states.

"We're trying to get the message out to watch what you bring and if you don't burn it all, take it home with you," he said.

Cape Henlopen State Park Superintendent Paul Faircloth said he doesn't turn away campers who haul their own firewood, but staff advise them to burn every piece of it and not leave anything behind.

"So if there are any critters in there, they're not hanging around to hatch and spread their little blessings around our park," he said.

Once those little blessings arrive, they can wreak havoc on trees that haven't adapted to the insects. Glenn Gladders, a forest health specialist for the Delaware Forestry Service, said most of the insects have hitched a ride on cargo vessels from other continents.

The Asian long-horned beetle and the emerald ash borer, two tunneling wood bugs from Asia, burrow into maple and ash trees, respectively. Neither has shown up in Delaware's forests, but Gladders said they've been found in Maryland and Pennsylvania, with the borer also invading Virginia.

Native to Asia, Europe and north Africa, the sirex wood wasp carries a fungus that indirectly kills the trees. Gladders said it's infected pine trees in New York and Pennsylvania.

Because Delaware is at the northern end of the tree's range, he said the wasp has not yet encountered the loblolly pine.

"We can't say for sure what will happen, but it's a big risk for us," he said. "Loblolly pine is the mainstay of our forest industry. It's the reason we take this really seriously."

But it could only take one person to put the whole industry at risk, according to Rob Line, manager of the Department of Natural Resources and Environment Control's Environmental Stewardship Program.

"You find a dead tree in your back yard, cut it down and chop it into firewood without thinking," he said.

The only thing protecting the state is its natural barriers, Line said.

"Delmarva is isolated in a peninsula, so we're the last to get a lot of the insects," he said.

Off Route 1, between Lewes and Milton, state forester Sam Topper checks a trap for signs of the emerald ash borer, the green-colored beetle that has spread to 14 states since 2002.

"We're responsible for 16 of the traps, checking them every couple weeks to see if they've shown up," he said.

Gladders said 190 of the two-foot-tall, triangular traps hang from trees across the state. They're covered in manuka oil, the only chemical that seems to attract the creatures, though he said the reason why is still mysterious.

Fourteen similar traps were distributed in the state's pine forests to monitor for the wood wasps. He said they use a mix of pinings, chemicals that are emitted by pine trees under stress, which have some of the same chemical properties as turpentine.

"The idea is the sirex wood wasps are attracted to trees under stress, because they're weaker," Gladders said. "The traps mimic that."

They also monitor the hives of native insects, such as the cerceris wasp, which is a natural predator of some of the invasive species, he said.

Although there isn't a lot state officials can do to protect the trees, Line said the monitoring programs will at least give some advanced warning of their presence. 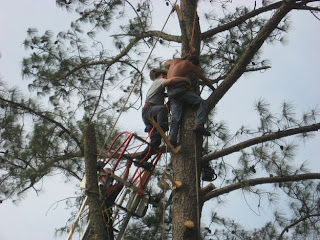 SUFFOLK - —Firefighters in Suffolk rescued a tree worker on Wednesday afternoon after the man had become dehydrated and unresponsive while 60 feet off the ground.

The emergency crew responded around 4:30 p.m. to a location on Carolina Road after the 40-year-old man grew weak while working with a chain saw in a pine tree. When firefighters arrived, the man was unresponsive and was attempting to hold onto the tree and his safety ropes.

Firefighters used a ladder truck to reach the man and bring him down. Debbie George, spokeswoman for the city, said the rescue took about 30 minutes.

The man was treated at the scene but declined to be transported to a hospital.
www.wtkr.com
Posted by jmmb at 7:15 AM No comments: