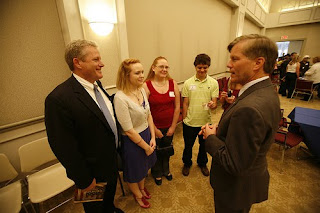 RICHMOND, Va. (AP) — Virginia's Wall of Honor has added 24 names to honor state residents killed in the war on terrorism.

Attorney General Ken Cuccinelli hosted a ceremony Thursday at the South Portico of the state Capitol in Richmond.

The event recognized the 206 Virginians who have died serving in the war on terrorism. It included a flyover by an F-18 fighter jet, a gun salute and a roll call.

Speakers included state officials, military leaders and Kim Felts, whose husband, Col. Thomas Felts, was the 100th Virginian killed in action during the war on terrorism.

The Wall of Honor was dedicated in 2007.