Big Cat Sighted Again.....Could It Be A Puma Concolor? 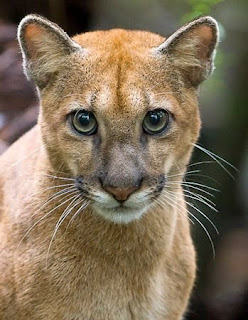 CHEAPSIDE -- Raymond Gunter of Townsend is not the first person to suspect he has seen a cougar or other large cat prowling on the Eastern Shore, but he may be the latest.

I have never seen anything like it and I have been in construction work for 38 years," Gunter said.

He's built highways all over the southeast and has seen alligators, rattlesnakes, bears and all sorts of wildlife.

"And I never heard a sound like this. It startled me, and I said, 'What in the world is this?' "

Gunter's report is one of several recent large-cat sightings, many of which describe a cougar-like animal.

The animal he saw on Friday, May 28, at fairly close range fits the same description -- a rusty-tan colored, three-foot long cat with a long tail. It was quick-footed and traveling close to the ground.

Similar sightings were reported in February a few miles to the north in Dalbys.

Since reporting that incident, the News has received accounts of more sightings in both Accomack and Northampton counties over a number of years.

Gunter was doing some tree work at a Cheapside home when he heard a loud sound coming from high up in a 50-foot-tall tree.

Then he heard rustling and scratching sounds as the animal made its way down the opposite side of the tree. Gunter didn't get a good look until it was on the ground.

"It was crouched, moving low to the ground, creeping like, at a pretty good rate, then crossed over the road and went into the woods," he said.

He said some neighborhood dogs heard the screeching and moved in to investigate.

"Then they stopped because I think they thought better of it," Gunter said.

In February, Ernie and Kathleen Coulter reported hearing a loud screaming sound over a couple days in December before they ever saw the would-be cougar.

"I thought it might have been a bobcat because it was loud,"

Kathleen Coulter said then. "It was a deep scream. It was scary. I have never heard anything like that before. 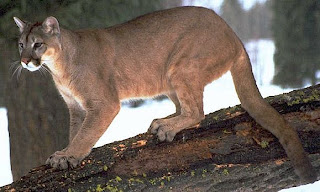 The couple saw a very similar animal to Gunter's at least twice after hearing the sounds.

The cat's official name is puma concolor, but the species has many common names including mountain lion, puma and cougar.

It is unlikely, though, to make it to this area, said Sue Rice, manager of the U.S. Fish and Wildlife's Eastern Shore of Virginia National Wildlife Refuge at the time of the February sightings.

"The chances of there being a mountain lion that is a wild animal on the Eastern Shore of Virginia is extremely low," she said. "Even in the whole state of Virginia, I don't believe there are enough sightings."

A wild cat would have to come from the woodsy north. "The chances are pretty slim for them to get here without being seen or getting hit by a car if they are wild animals," Rice said, suggesting instead a pet released locally.

Cougars are both solitary and nocturnal for the most part and feed on white-tail deer. Females have ranges of several square miles, but the male's home-range is much larger, which could account for reports of sightings in Melfa and Wachapreague and other parts of Accomack, too.