Beltway Sniper to be Executed 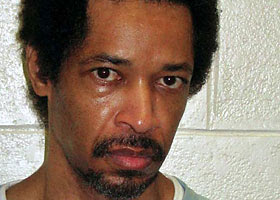 John Allen Muhammad will die by lethal injection tonight at 9 P.M., unless there should be a last minute reprieve by the govenor of Virginia.

On Monday the U.S. Supreme Court denied the appeal of the Beltway Sniper.

Muhammad was convicted by a Virginia Beach, Virginia jury in November 2003 for his part in the shooting spree on the Beltway area during and around 2002.

So, after his busy day and without a reprieve from Virginia's govenor, Inmate #331009, will be excecuted this evening at 9:00 -p.m.

In a lethal injection execution an IV line is inserted into both arms. Once the three chemicals have been inserted the inmate becomes unconscious, the breathing stops, and finally...... the heart.
Posted by jmmb at 11:02 AM

The VA govenor has indicated there will be no reprieve.

Govenor Kaine said, "I decline to intervene". Muhammad's attorneys say he is mentally ill! Gee, after all this time.