The Little Dog and the Big Pig

A giant farm dog and a tiny piglet cuddle up as if they were family after the baby runt was dismissed by its own mother. Surrogate mum Katjinga, an eight-year-old Rhodesian Ridgeback, took on motherly duties for grunter Paulinchen - a tiny pot-bellied pig - and seems to be taking the adoption in her stride. Lonely Paulinchen was luckily discovered moments from death and placed in the care of the dog who gladly accepted it as one of her own. Thankfully for the two-week old mini porker, Katjinga fell in love with him at first sight and saved his bacon. 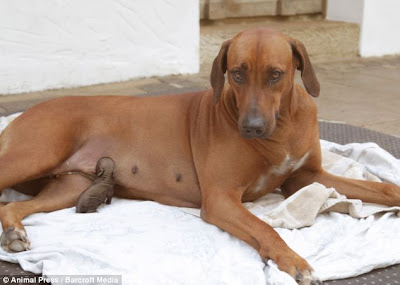 And the unlikely relationship has made the wrinkly piggy a genuine sausage dog. In these adorable images Paulinchen can even be seen trying to suckle from his gigantic new mum.
The two animals live together on a huge 20-acre farm in , where Katjinga's owners Roland Adam, 54, and his wife Edit, 44, a bank worker, keep a pair of breeding Vietnamese pigs. 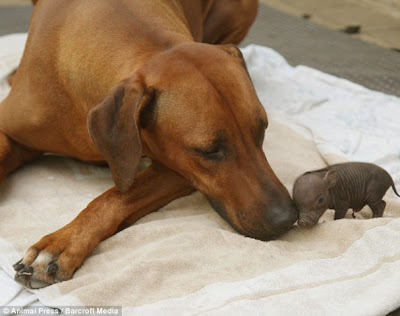 Nose place like home: The baby piglet nuzzles up to its new mum
Property developer Roland found the weak and struggling piglet after he was abandoned by the rest of his family one evening after he was born.
He said: "The pigs run wild on our land and the sow had given birth to a litter of five in our forest.
"I found Paulinchen all alone and when I lifted him up he was really cold 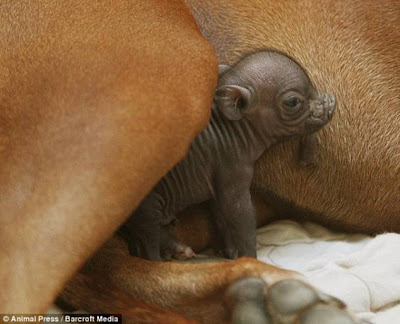 "I felt sure some local foxes would have taken the little pig that very night so I took it into my house and gave him to Katjinga..
"She had just finished with a litter of her own, who are now 10 months, so I thought there was a chance she might take on the duties of looking after him.
"Katjinga is the best mother you can imagine. She immediately fell in love with the piggy. Straight away she started to clean it like it was one of her own puppies.
"Days later she started lactating again and giving milk for the piggy. She obviously regards it now as her own baby."
Mum of the year? Quite possibly. 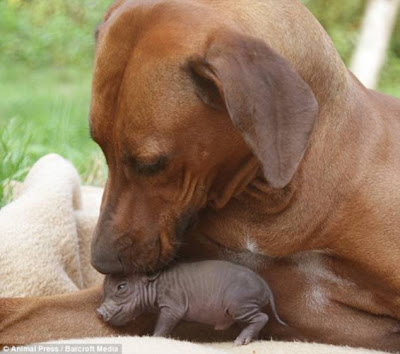 Have a Good Day!
Be kinder than necessary, for everyone you meet is fighting some kind of battle.

That's the kindest thing I have seen in a long time. And if they ever get tired of that little pig hanging around they can send it over here to me. That's alot of dog for a tiny pig, though!