Fire departments were called once again this afternoon to this location due to a rekindle.

At 5:09 PM on Saturday afternoon, a woods fire was reported on Neal Parker Road just south of Bayside Market. The fire burned several acres of property on Neal Parker Road, which is Route 316 between Hallwood and Saxis Road. The piece of land which was damaged in the fire was a wooded area which had just recently been cut, according to Station 6 Chief Jody Bagwell. 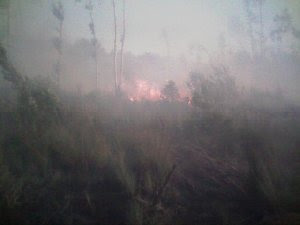 According to Bagwell, the stretch of Neal Parker Road between Hallwood and Saxis road was temporarily closed due to the enormity of the fire. The scene was cleared Saturday evening at 10:10 PM. Several recalls were made on Sunday because of the fire reigniting in certain areas. Roughly 10 acres of land were burned in the blaze. Bagwell said the cause of the fire has not been determined, but foul play is suspected by investigators. 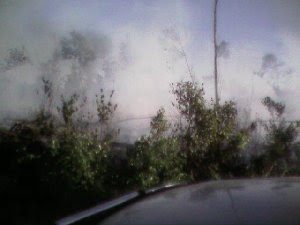 A forest fire warning was in effect throughout the weekend on the Eastern Shore due to the low humidity and the high winds. All citizens were advised to properly discard all smoking materials and items to avoid brush and timber fires. Lack of rain has caused the fire danger to be extreme and caution should continue. Showers and thunderstorms expected during the middle of the week should help reliveve some of the dry conditions.