Alexander Crippen could be facing life in jail for attempted murder with the possibility of an extra 20 added to those years for carrying an illegal weapon. Gee, that means for the rest of his life he gets to breath, eat, exist behind bars. No matter where he is and no matter where the man that he attempted to murder may be BOTH are alive. And good for them, I guess. But what about the family of Reginald Handy?
Forensics couldn't prove Crippen killed that young man. And no one saw? Not a soul saw anyone that night but a bullet into the back of Handy? I'm just wondering, because there doesn't seem to be any closure for the family that loved and had to bury Reginald Jerome Handy.
If it can't be proven that Crippen fired that bullet into Handy's back then who did? Or is that the family just has to accept that Crippen probably did do it...........it just can't be proven beyond that "shadow of a doubt"? Where is the closure for this family?
What do you say to them? Does anything happen for them? 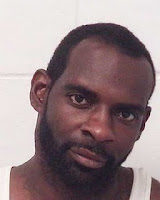 SNOW HILL -- Friends and family members of Alexander Crippen cried and consoled each other in Circuit Court after Judge Richard R. Bloxom said Crippen was guilty of trying to kill a man.

During his deliberations, he recalled the instructions given to jurors when they have trouble deciphering witness testimony: that they may believe all, part or none of what witnesses say.

Crippen, who has listed residences in Fort Washington, Md., and Pocomoke City, has been held without bond at the Worcester County Jail since late May, when he was charged in the murder of Reginald Jerome Handy Jr., 22. Handy was gunned down outside a Laurel Avenue home on May 27.

In June, a grand jury indicted Crippen on murder and other related charges connected to Handy's death in addition to attempted murder. But Bloxom dismissed the murder charge against Crippen during a criminal motions hearing. Prosecutors said forensic evidence would have made it impossible to prove Crippen killed Handy. Crippen was instead convicted of attempting to kill another man, Torrance Davis, 28, who was at the scene of the shooting in May.

After the verdict was read, Deputy State's Attorney Michael Farlow asked the judge to order a presentence investigation before Crippen is sentenced.

"Now that he has been found guilty on all counts, we will be seeking the maximum penalty," Farlow said. The maximum penalty life in prison. He said a second charge, wearing and carrying an illegal weapon, can carry an additional sentence of up to 20 years.

"We are obviously disappointed but respect the judge's decision," McGreevy said.

I hope Judge Bloxom gives this man the maximum penalty of life. Time and time again Crippen has disrepected the laws of the land and time and time again he was given another chance and didn't learn. It's time to start protecting us from him once and for all.