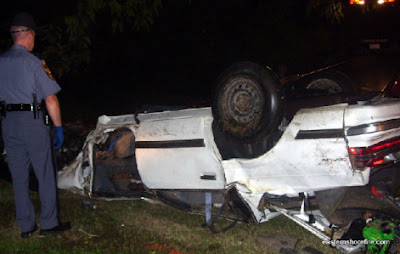 ﻿At 10:15 Monday night a double fatal accident occured on Bobtown Road. Melfa, Painter and Exmore responded to the accident.

On August 1, 2011 at approximately 2214 hours Virginia State Police was called to a single vehicle accident on Route 178 north of Route 609 in Pungoteague, Accomack, Virginia.
A single vehicle, 1996 Buick Century was traveling on Route 178 when it ran off the road to the right struck a tree stump and overturned, killing the driver and front seat passenger.
The vehicle was occupied by four occupants The back two passengers were taking to the local hospital with non-life threatening injuries.


Notification to family members has been made. All occupants were wearing their seat belts, alcohol was a factor.

Currently the investigation is on-going.