These mushrooms seem to be in every yard lately so I've  been doing a little reading about the "death cap" mushroom.  It seems this same type of  mushroom  last year even killed large dogs that ate them.  So, based on that and because you don't have to tell me twice something is poisonous, I won't even touch them!  Thank goodness we don't have many that have popped up in our yard.


They're cute.  Sometimes there  is one alone and sometimes they seem to grow in a cluster.  They come in all shapes, sizes and colors.  Even so I would NOT let my dog go near them NOR any children.  Play it safe and just avoid them! 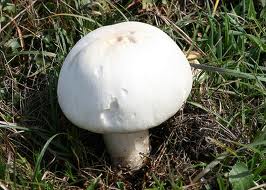 Washington AP— Mushrooms are sprouting up everywhere after recent rainy weather, but doctors at Georgetown University are warning against eating them after treating two men fell dangerously ill from toxic mushrooms in the last two weeks.

Frank Constantinopla and his wife picked mushrooms from their backyard in Springfield, Va., to cook in a stir fry. Within hours of eating the fungi known as "death cap" mushrooms, they felt sick. His symptoms were worse and within days, he was suffering from the early stages of liver failure.
One week later, a retired farmer from Frederick, Md., fell ill with mushroom toxicity. Doctors were able to use a drug that's undergoing clinical trials and now both men are recovering.

Doctor say people should buy their mushrooms from legitimate farms or grocery stores.