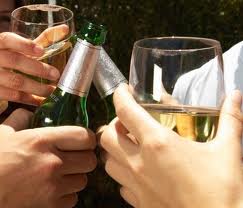 Next time you get a little too drunk, blame it on your immune system, not so much on the alcohol.
New research from the University of Adelaide highlights that alcohol affects an immune response in the brain, whose cells affect muscles that control walking and talking, according to a recent study published in the British Journal of Pharmacology on Sept. 28.
Scientists already knew alcohol affects nerve cells in the brain; the findings suggest our response to alcohol is both neuronal and immunological.

And a new 'stay sober pill' might be on its way to curb the negative effects of alcohol on a person's behavior. A pill, researchers say, that could benefit binge drinkers and alcoholics, The Herald Sun reports.
Initial tests on mice show that mice that were given alcohol and the pill, which essentially turns off the immune response, did not display signs of drunkenness, the study states.

Mice that were genetically altered to automatically block the receptors also had reduced responses to the liquor.

"Medications targeting Toll-like receptor 4 may prove beneficial in treating alcohol dependence and acute overdoses," Dr. Mark Hutchinson, the study's lead researcher, stated in a press release.
Knowing that the receptors are responsible for how the body reacts "could help detect the people at greater risk to develop brain damage from drinking," FOX News reports.
The findings might explain why people react differently to the same amount of alcohol, The Telegraph points out.
"It's amazing to think that despite 10,000 years of using alcohol, and several decades of investigation into the way that alcohol affects the nerve cells in our brain, we are still trying to figure out exactly how it works," Hutchinson said in a statement.
Source;  http://www.huffingtonpost.com/2011/09/29/stay-sober-pill-alcohol-immune-system_n_987393.html
Posted by jmmb at 7:00 AM