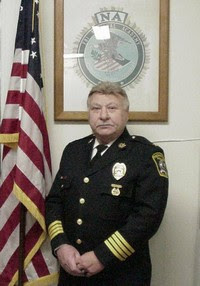 NEWS RELEASE
Long- time Pocomoke City Police Chief Juergen D. (J.D.) Ervin has announced his retirement effective November 30, 2011. Prior to assuming his position in Pocomoke City in 1995, Chief Ervin served two years as the Chief of the Elkton, Maryland Police Department and 28 years with the Laurel, Maryland Police Department including 12 years as Deputy Chief.
Chief Ervin is a graduate of the FBI National Academy in Quantico, Virginia and has served as President of the Maryland Municipal League Chiefs’ Association for the past 30 years. He has been active in several groups including the International Police Chiefs’ Association and the American Legion. He is a Vietnam-era Army veteran who served four years in the military police. In 1970-71 he served as Chief of Police in Pocomoke City.
Some highlights of Chief Ervin’s exceptional career in Pocomoke City have included:
● CALEA (Commission on Accreditation of Law Enforcement Agencies) National Recognition Certification; one of only 2 city police agencies on the Eastern Shore of Maryland to be CALEA-Certified or Recognized;
● Introduction of several youth-related programs including Christmas Party, Back-to-School event, Easter Egg Hunt, and fishing program;
● Two “National Night Out “events in the top 20 Nationwide;
● Receipt of over $1 million in State and Federal grants; and
● Significant reductions in overall crime rates through technology, training, enforcement and citizen engagement.
According to Mayor Bruce A. Morrison, “The City Council and I wish Chief Ervin well in his retirement, which is greatly deserved. He has done an outstanding job for our community for the past 16 years”. “With his previous experience in larger departments, he brought a new level of professionalism to our Police Department.” City Council Vice President Tracey Cottman added, “J.D. has done a great job as our Chief. Although we will miss him, he leaves the Police Department in excellent shape for the future.”
A retirement banquet for Chief Ervin is in the planning stages.
Coincidentally with Chief Ervin’s retirement, City Manager Russell W. Blake also announced the appointment of Captain Kelvin D. Sewell as Chief of Police. According to Blake, “Captain Sewell has been a great addition to the Police Department and has earned his promotion to Chief. His prior experience with the Baltimore Police Department has been very valuable and will continue to benefit the Pocomoke City Police Department in the future.”
Capt. Sewell is married with two children and is a resident of Pocomoke City which is required by City policy. He will take over as Chief of the Pocomoke City Police Department on December 1, 2011.
Mayor Morrison said, “Capt. Sewell has made an excellent impression on elected officials, police employees and the general public. We are glad that we are able to promote someone from within our own department to this important position.”
Councilwoman Cottman added, “Capt. Sewell is a man of character and integrity as well as an exceptionally well-qualified professional to be our Chief of Police. We look forward to working with him for many years to come.”
Good luck to you both.

Ervins retirement is long overdue. What do we know about Sewells background other than his being a retire Baltimore City Cop?

Chief Ervin, thank you for your service!

Captain Sewell, congratulations on your pending promotion and best wishes in all your future endeavors as the new Chief of the Pocomoke City Police Department.

Anonymous 9:16
Your post has been deleted.
Wrong name. Sorry.
Next time to feel professional and want to bring news here be sure you sign your name. Let's be mature about the situation.


Please don't waste your time.
Anonymous comments that are negative will be removed.

Captain Sewell is a graduate of Coppin State University where he received his Bachelors of Science Degree in Criminal Justice. He is married with two Children. Captain Sewell spent 22 1/2 years as a Baltimore City Police Offier. He worked in several specialized sections before his retirement in November 2010. Captain Sewell is a highly decorated Officer who received two bronze stars, five commendations, The Governors award for Officer of the year in 1995, two House of Delegates award for Officer of the year etc. While at Baltimore City, Captain Sewell supervised the Integrity Unit of Internal Affairs. He was also Supervisor in charge of the Narcotics Unit along with five additional years with DEA as a task force/undercover officer. His last assignment was with The Baltimore City Homicide Section where he supervised detectives who investigated homicides, suicides, supicious deaths, kidnappings, abductions and police involved shooting incidents.
Captain Sewell is also the author of a five star best seller book called WHY DO WE KILL. This book talks about some of his most high profile homicide cases he investigated including the famous John's Hopkins Hospital shooting of a doctor in 2010.
Knowing Captain Sewell for many many years as an intelligent, no nonsense type of guy. Pocomoke City is fortunate to have him as their next leader.

I'm impressed, Good luck Captain Sewell and Cograts on your promotion to chief.

George, Thank You very much for the information.
I checked and if anyone is interested Captain Sewell's book "Why Do We Kill" is available on Amazon.
Congratulations to Captain Sewell.

I brought my book "Why Do We Kill" from Barnes and Noble. It should be a ten star book. If you want to know anything about Captain Sewell, read the book. You won't be able to put it down. He is a top notch investigator. Thank you Captain Sewell for coming to our town of Pocomoke.

Congrats to Chief Ervin on his retirement and Welcome to Pocomoke City Captain/Chief Sewell.

Yes I agree, long overdue. Now one more to go!

Who's the one more?