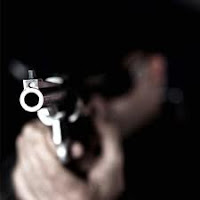 A 10-year-old Aiken trick-or-treater pulled a gun on a woman who said she would take his candy on Halloween.
According to a police incident report, the 28-year-old victim told authorities she recognized some boys from her neighborhood while they were trick-or-treating about 6:30 p.m. Monday near Schroeder and George streets and jokingly told them she would take their candy.


One 10-year-old in the group of about 10 juveniles responded with “no you’re not …” and then pointed a 9 mm handgun at her.
According to Aiken Public Safety Lt. David Turno, the clip was not in the gun at the time, but the boy did have a loaded clip in his possession.

The boy’s brother, also 10, told authorities he also had a gun.

The second weapon was recovered Tuesday morning.
The boy who pulled the weapon was brought to the police station where he was turned over to the custody of his parents.
Turno said the boys got the weapons from their grandfather without permission.
Source;  http://chronicle.augusta.com/news/crime-courts/2011-11-01/aiken-trick-or-treater-10-pulls-gun?v=1320212003
Posted by jmmb at 7:08 AM