ECI has been selected to receive puppies for inmates participate in  America's Vet Dogs. 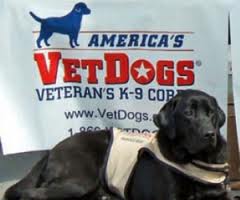 
“This is one of the most significant restorative justice projects I have ever been involved with,” said Secretary Maynard. “To have inmates---including incarcerated veterans--- doing something this meaningful is beyond words.”
“More than forty-six thousand wounded veterans have returned from Iraq and Afghanistan,” noted Sheila O’Brien of America’s Vet Dogs. “They’re changing the face of the disabled in America, and we have to do something to help them.”

The unique program will feature specially selected inmates--- including many who are actively involved with incarcerated veterans’ groups—caring for the puppies for an extended period of time before the dogs receive more specific service dog training coordinated by America’s Vet Dogs.

The dogs will live in the cell or dorm housing with each inmate; all three prisons are constructing special fenced areas, mostly built by inmates. Maryland Correctional Enterprises has donated the cages and cage bedding, all of which were made by inmates. At MCI-H, inmates have moved 25 tons of crushed stones to construct a dog walking area behind the dorm in which the puppies will live.

Dan Lasko, a Marine corporal who lost his leg in an IED explosion in Khandahar in 2004, traveled from southeastern Pennsylvania with his service dog Wally. Lasko was moved by the compassion of the prison staff and inmates---as well as by the nearly wall-to-wall murals depicting veterans’ scenes that were painted by the MCI-H inmates in advance of the announcement.

All three prisons have secured significant private donations and pledges of veterinary care for the puppies. “The outpouring from our Cumberland area community has been remarkable,” says WCI Warden Frank Bishop.  Added Warden Wayne Webb of MCI-H: “Our staff and inmates and the greater Hagerstown community have come together for this worthy project and we can’t wait to get started.”
Tomorrow, Eastern Correctional Institution in Westover will kick-off its Vet Dog program with a check presentation from inmates to the organization, in a special ceremony there at 10:30 a.m.  Inmates have already raised a significant amount of money to get the program started, and prison staff have lined up essential community partners such as veterinarians and local veterans’ support groups.