Cinco de Mayo is an increasingly popular holiday for citizens to celebrate with friends and family.  Because of the amount of people celebrating, roadways have the potential to become dangerous.
According to the National Highway Safety Administration (NHTSA), between 2007 and 2011, 38 percent of all motor vehicle fatalities that occurred each year around May 5th involved impaired drivers or motorcycle operators.
“With Cinco de Mayo celebrations on the rise across the country, alcohol-impaired crashes, injuries and fatalities may also rise,” said Acting Chief Gregory Guiton. “Remember, buzzed driving is drunk driving, and is never safe or acceptable. So folks should plan ahead now to avoid the temptation on the big day.” 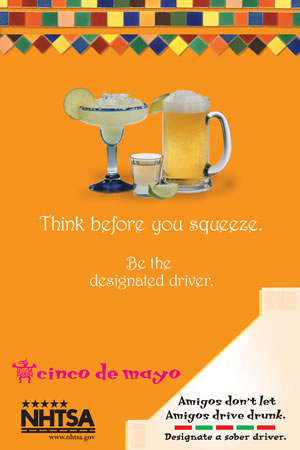 Plan a safe way home before the festivities begin.
Before you begin drinking, designate a sober driver and leave your car keys at home.
If you are impaired, use a taxi, call a sober friend or family member, or take the bus so you are sure to get home safely.
If you happen to see a drunk driver on the road, don’t hesitate to contact your local law enforcement agency.
Remember, if you know someone who is about to drive while impaired, take their keys and help them make other arrangements to get where they are going safely.