Gov. Martin O'Malley called it "a sacred and holy relic," and his voice faltered as he said he would do his part to ensure that the state never forgets the 43 Marylanders who died when airplanes smashed into the towers and the Pentagon in Virginia.

O'Malley, a Democrat who was mayor of Baltimore in 2001, and Baltimore Mayor Stephanie Rawlings-Blake were among those present for an arrival ceremony on a parking lot near the Dundalk Marine Terminal, where the beams will be stored until the memorial is installed.
The project is privately funded and overseen by an advisory committee that includes members of the Maryland Department of Business and Economic Development, the Maryland Commission on Public Art, the Port Administration and the State Arts Council. 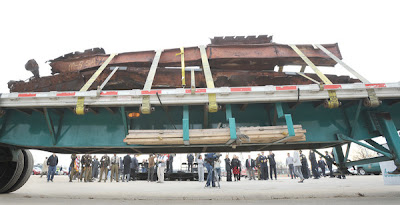 Some 40 artists asked to work on the project, and the committee will select about five finalists and interview them next month. The public can weigh in at meetings early next year. Randall Griffin, chairman of the committee, said its members are seeking to raise at least $1 million for the project.

The rust-colored metal is 22 feet long and weighs about 4,000 pounds. It will be installed at the base of the World Trade Center at Baltimore's Inner Harbor. A smaller beam remnant will be displayed at the observation level of the building.

"The focus of the memorial will be on the artifact itself," said Theresa Colvin, executive director of the arts council. She described the fused beams, which she helped select, as "majestic."

"It represents the tragedy of the day," she said. "Yet there's something uplifting about it."

Barbara Bozzuto, a public art commissioner and member of the memorial committee, recalled the August trip to the JFK Airport hangar that houses thousands of scraps from the New York terror site. Silently, the Marylanders walked through the hangar, looking at the material and reading the tags that showed where each piece was bound — from nearby small towns to big cities across the world.

The artifact chosen to become Maryland's memorial, Bozzuto said, "is an emblem not of death and destruction, but of remembrance."

Looking on as the beams arrived was Basmattie Bishundat, a Waldorf resident whose 23-year-old son, Romeo Bishundat, a Navy serviceman, died at the Pentagon. She called it "impressive and great" that Maryland is erecting a memorial and promised to visit it.

The group in the Dundalk parking lot fell silent as the police escort arrived. Next came the beams, strapped to a flatbed truck that passed under an oversize American flag strung from the outstretched ladders of fire equipment.
www.baltimoresun.com
Posted by jmmb at 7:30 AM No comments:

SHANKSVILLE — Bikers wearing red, white and blue bandanas and with American flags flying from their motorcycles gathered outside this tiny town Thursday on their way to visit hallowed ground.

Their three destinations: The nearby site of the crash of Flight 93, the Pentagon and, eventually, ground zero in New York City.

More than 700 bikers and police officers are participating in the 10th annual ride, sponsored by the America’s 911 Foundation.

Many said they want the focus to be on reminding people what happened on Sept. 11, 2001 – not the current controversy over a proposed Islamic center and mosque near where the twin towers once stood.

“It’s a remembrance ride. A lot of the general public have become complacent with the events of Sept. 11. That can’t be,” said Rick Flick, 50, who lives in western Pennsylvania and has been participating in the ride for nine years.

A volunteer firefighter, Flick was on the scene after Flight 93 crashed and said the ride is personal for him.

Bill and Mary Byers, of Washington, Pa., are participating in their first ride with the group. A longtime biker, 51-year-old Bill Byers has never been to ground zero and has mixed feelings about the proposed mosque.

“Muslims are like any other religion. The people who are putting this mosque up are just regular people,” said Byers, wearing a black leather vest with a pentagonal patch that is the ride’s logo. At the same time, he said, “You don’t want to have the families feel they are disrespected.”

Pete Burgoon, 65, a member of the Red Knights, a motorcycle club for firefighters, greeted bikers arriving in town. Wearing a red T-shirt and black leather vest, the Altoona resident said the ride is a chance for people to pause and think about the lives that were lost that day.

The America’s 911 Foundation was started by Ted Sjurseth and his wife, Lisa, just weeks after the attacks, and the group had its first ride to New York City that fall.

The group was started with the goal of bringing back tourists and money to businesses hard hit by the attacks; it later evolved to a group dedicated to honoring first responders, as well as promoting volunteerism, said Roger Flick, of Damascus, Md., the group’s promotion’s manager.

Bikes started lining up Thursday outside a hotel in Somerset where the ride is to start early today. Riders will be escorted by dozens of police on motorcycles, and participants are expected from as far away as California.(Photo taken from previous ride) 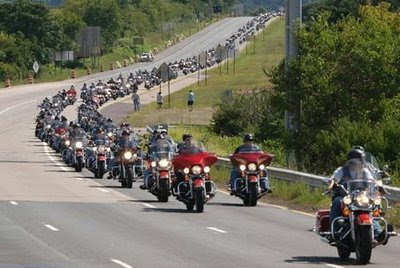 The participants visited a temporary memorial set up at the Flight 93 crash site about 10 miles away. Construction is under way on a permanent memorial there, and the first phase of it is expected to be completed in time for the 10th anniversary of the attacks next year.

Ride organizers hope to also have their biggest turnout ever next year, with a bike for each of the more than 2,000 people who died in the attacks.

“This will be my ninth ride,” Flick said, “and I’ve done it every year with a knot in my throat when I think about why we’re doing this.”
www.tribune-democrat.com
Posted by jmmb at 8:01 AM No comments:

N.Y. Governor to Meet With "Ground Zero" Mosque Developers But No Plans to Relocate

ALBANY, N.Y. – New York Gov. David Paterson expects to meet in the near future with developers of a proposed Islamic cultural center that would include a mosque near Manhattan's Ground Zero, The Washington Post reported Tuesday, but a key voice in the discussion denied to Fox News any plans to relocate."

Paterson last week offered his help and the possibility that state land could be used for an alternative site for the project.

The Post reported Tuesday that Paterson spokesman Morgan Hook said that the governor's staff is talking with developers, but no formal discussions have taken place on the the $100 million building.

"However, we expect to have a meeting scheduled in the near future," he said.

After a similar report appeared Monday in an Israeli newspaper, Sharif El-Gamal of SoHo Properties, which owns the property at Park 51, said it's absolutely wrong to suggest that the site is being abandoned.

'The reports that we may be abandoning the project are completely incorrect. We are committed to our plans of building Park 51 to serve the community of lower Manhattan. Our mission is one of peace, understanding and tolerance," he said.

The 13-story Islamic cultural center and mosque that would be located two blocks from where the World Trade Center stood until Sept. 11, 2001, has raised a national argument over the First Amendment and anger over the terror attacks.

Supporters say the mosque and its founders do not represent the beliefs of anyone associated with the attack on the U.S. that day, and its construction will represent the freedom of religion that America prizes.

Opponents say it's not a constitutional question, but one of right and wrong since no one wants to deny the Muslim community the right to practice its religion, but to show a greater respect and sensitivity for the tragedy.

The issue has caused a major debate among politicians, including President Obama, whose various comments over the weekend have forced lawmakers on both sides of the aisle to stake positions on whether they support the mosque's location or prefer the developers to move it.

Congress and the White House have no recourse to prevent its construction, and local officials last week approved new construction at the site, which is currently an old Burlington Coat Factory building that suffered damage from landing gear from one of the planes that hit the Twin Towers.

Late Monday, Senate Majority Leader Harry Reid, who is in a tough race for re-election, suggested SoHo Properties find an alternate location. The statement was cast as a break from the president on an increasingly unpopular issue.

The White House said Tuesday it got the heads-up from Reid that he was going to side against the mosque's site.

"We had a sense of what they were going to do," White House spokesman Bill Burton said, describing Reid as an independent individual and strong leader in the Democratic Party.

However, one imam who complained that Muslims are being prevented from building mosques elsewhere around the country chastised Reid.

"It has political capital, but very negative political capital. It speaks to the worst of politics to advance aspirations for the White House, Senate or House or people already in the Senate, the majority leader of Senate, because the race is so close in Nevada. I'm talking about Harry Reid," Mahdi Bray, executive director of Muslim American Society Freedom.

Meanwhile, House Minority Leader John Boehner, R-Ohio, who strongly opposes Park 51 as the site for the mosque, will attend a previously scheduled appearance at a fundraiser Friday night for Chris Gibson, a GOP congressional candidate in upstate New York, who says political opponents have tried to distort his stance that there should not be a mosque near Ground Zero.

"As someone who wore our nation's uniform and helped fight against those who share the extremist views of our attackers on that fateful day, I am disappointed political operatives would distort my words on the matter of how we best honor the victims of the 9/11 attacks," he said in a written statement.

"I do not support the construction of a mosque and have always felt it's neither the time nor place for it," he said.