WILLIS, Texas—A military family from Montgomery County is upset with American Airlines after a soldier was charged an overweight fee for his duffel bag.

Army Spc. Gary Sharpen was home on a two-week leave from his unit in Iraq. Melodie Sharpen said her husband was welcomed home by his family and even strangers.

“People were honking and waving,” Melodie Sharpen said. “One lady even stopped her car and said, ‘Thank you for your service.’”

The time flew by and before she knew it, Melodie Sharpen was dropping her husband back off at Bush Intercontinental Airport to fly back to the desert.

“He was wearing his army fatigues,” Melodie Sharpen said. “He had his backpack, which is Army regulated and he had his luggage.”

Gary Sharpen showed up with one 64-pound duffel bag, which is normally 14 pounds overweight. He wasn’t worried because he knew that American Airlines waived fees for active-duty military personnel.

The airline's policy says “military personnel on orders are allowed one bag in the free allowance up to 100 pounds.”

Sharpen's mother, Laura Lee, said not only was her son charged $50 in overweight fees, but the ticket agent was rude to him.

“I couldn’t imagine anyone treating one of our soldiers like that, telling them “so what” that they’re going back to Iraq,” Lee said.

Airline officials said they waive the fee only if a passenger shows military travel orders, and Gary Sharpen didn’t. His family argued that he wasn’t asked.

Melodie Sharpen said her husband had nothing he could take out of the bag to get it 14 pounds lighter.

American Airlines officials have agreed to refund Sharpen’s money if they see his travel orders.

However, his family said it’s not about the money, but about common courtesy for an American soldier.

Veteran Wins His Battle Over Flag 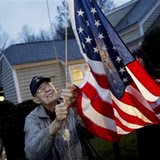 The same homeowners association that threatened to take legal action against Army Col. Van T. Barfoot, of Richmond, VA., has dropped its request for him to remove a 21 foot flag pole displaying the American flag. The association told Barfoot that his 21 foot flagpole violated the neighborhood's "aesthetic guidelines".

The 90-year-old Medal of Honor winner was backed by the Democratic Senators from Virginia Mark Warner and Jim Webb. In a letter last week, to the homeowners association, Senator Jim Webb urged the association to "consider the exceptional nature of Col. Barefoots service when considering his pride and determination in honoring out flag."

Not only has Army Col. Van T. Barefoot had the two Virginia senators supporting him but has been backed by veteran's organizations, blog sites, and most television stations across America and some parts of the world. Facebook even had a link titled "Let Col. Barefoot Fly the American Flag." FOX News reported 97% in favor of KEEPING the American flag.
Good for Army Col. Barefoot, who won the Medal of Honor in 1944, the Purple Heart along with other decorations since his retirement from the military in 1974.