Changes Made In Pocomoke Election Laws

POCOMOKE CITY -- After municipal elections in 2009 led to an investigation by the State's Attorney's Office, the Pocomoke mayor and City Council set out to fill gaps in and make changes to their election laws. With a second city election under the new rules slated for this April, a review of the new election code shows some recommended changes were put in writing, while other reforms rely on city workers remembering new instructions passed down in talks and training.

Resolution 432, passed before the 2010 elections took place, changed who maintains the list of registered voters, handing over that responsibility to the Worcester County Board of Elections. The only other change made in writing allows voters to download absentee ballot applications online.

Town Manager Russell Blake said other changes suggested by the state's attorney report have been adopted in practice, even if they are not specifically called for in the new code.

"As I recall, the state's attorney report was a recommendation, and all recommendations basically have been followed in writing or in practice," Blake said. The changes not committed to code, he said, are still known to the city workers who run the elections.

After candidate Stephanie Burke alleged her opponents manipulated the absentee voting process to win in 2009, then-State's Attorney Joel Todd conducted an investigation and issued a report. No criminal charges were filed, and Todd found no evidence that candidates or city workers engaged in fraud.

Still, the report said the city did not maintain an accurate list of absentee voters and noted that the way city workers marked each absentee ballot with a number allowed his investigators to determine which absentee voters cast which ballots, violating the principle of the secret ballot.

Pocomoke's election code at the time said if there are any distinguishing marks on a ballot, then that ballot can be thrown out; thus, the report noted, the town's practice of numbering the ballots conflicted with its own code.

"If the town employees and volunteers working for the Board of Elections supervisors need additional training, and it seems apparent that they do, then that training must be provided," Todd's report read.

Resolution 432, the new election code, also states any distinguishing marks can discredit a ballot. The updated resolution does not specifically instruct election workers to write ballot numbers on outer envelopes and to not write numbers on the ballots themselves -- the change in practice Todd urged.

"The recommendation about not numbering ballots was incidental," Blake said in an interview. In the 2010 election, he said, Pocomoke conducted the election the way the report suggested: Ballot numbers were placed on the envelopes, not the ballots.

Carol Justice, the city clerk, said she was not aware individual ballots should not be marked with numbers, as had happened in 2009. She said she had not received formal election law training after 2009. Mark Tilghman, the attorney who began representing Pocomoke City in 2008, declined to be interviewed.

Jim Peck, director of research and information management for the Maryland Municipal League, said the sanctity of the ballot box is important in all elections.

"In general, there are broad efforts made to ensure when you vote it's between you and the voting booth," Peck said. The practice of numbering each ballot, he said, is "relatively unusual."

Last Day To Register In Virginia 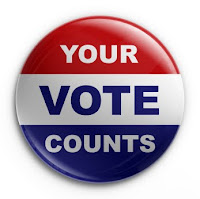 Virginians looking to vote in the November election have until 5 p.m. Tuesday.

The state Board of Elections says Tuesday is the deadline to register to vote or to update voter information. Virginians can register to cast a ballot as long as they will be 18 or older by Nov. 2.

They can register to vote at any of the 74 Virginia Department of Motor Vehicles customer service centers or 57 DMV Select locations throughout the state or at their local registrar's office.

Residents also can check their voter status and polling places on the board's website, http://www.sbe.virginia.gov/.

Assistance also is available by calling the board at 1-800-552-9745 or the local registrar's office.

Email ThisBlogThis!Share to TwitterShare to FacebookShare to Pinterest
Labels: Board of Elections, elections, registration, Virginia, voting

Worcester County State's Attorney Joel Todd said he was "made aware" Sept. 10 of a "potential issue" with absentee ballots cast by voters in District 2, which covers Snow Hill and parts of central Worcester. He requested the election board have staffers handle absentee ballots with surgical gloves as not to impact evidentiary value.

Todd said the investigation is isolated to District 2 absentee ballots, and that he has "no reason to believe the Board of Elections has done anything wrong."

Todd said on primary day, Sept. 14, contacted the Office of the Maryland Attorney General for guidance. They in turn referred the case to the Office of the State Prosecutor, who will now be handling the still-undefined investigation.

He declined to speak further about what he called an ongoing investigation. The chief investigator with the state prosecutor's office, Jim Cabezas, also declined to comment.