US Delegation Walks Out On Ahmadinejad's UN Speech

UNITED NATIONS – The U.S. delegation walked out of the U.N. speech of Iranian President Mahmoud Ahmadinejad on Thursday after he said some in the world have speculated that Americans were behind the Sept. 11 terror attacks, staged in an attempt to assure Israel's survival.

He did not explain the logic of that statement that was made as he attacked the U.S. wars in Iraq and Afghanistan.

Ahmadinejad has called for the destruction of Israel and is deeply at odds with the United States and European allies over its nuclear program and suspicions that it is designed to produce an atomic bomb. Iran says it is only working on technology for electricity generation.

The U.S. delegation left the hall after Ahmadinejad said there were three theories about the Sept. 11, 2001 attacks:

_"That some segments within the U.S. government orchestrated the attack to reverse the declining American economy and its grips on the Middle East in order also to save the Zionist regime. The majority of the American people as well as other nations and politicians agree with this view."

The Americans stood and walked out without listening to the third theory, that the attack was the work of "a terrorist group but the American government supported and took advantage of the situation."

Mark Kornblau, spokesman of the U.S. Mission to the world body, issued a statement within moments of Ahmadinejad's attack.

"Rather than representing the aspirations and goodwill of the Iranian people," he said, "Mr. Ahmadinejad has yet again chosen to spout vile conspiracy theories and anti-Semitic slurs that are as abhorrent and delusional as they are predictable."

Ahmadinejad, who has in the past cast doubt over the U.S. version of the Sept. 11 attacks, called for establishment of an independent fact-finding U.N. body to probe the attacks and stop it from turning into another sacred issue where "expressing opinion about it won't be banned".

He said the U.S. used the attacks as a pretext to invade Afghanistan and Iraq that led to the killing of hundreds of thousands of people, saying the U.S. should have "designed a logical plan" to punish the perpetrators while not sheding so much blood.

Ahmadinejad boasted of the capture in February of Abdulmalik Rigi, the leader of an armed Sunni group whose insurgency in the southeast of Iran has destabilized the border region with Pakistan. He said authorities did not resort to violence, but captured the suspect after trailing his movements in an operation by Iranian secret agents. Rigi was later hanged.

The Iranian leader spoke of threats to burn the Quran by a small American church in Florida to mark the anniversary of the Sept. 11 terror attacks. Although that church backed down, several copycat burnings were posted on the Internet and broadcast in the Muslim world.

He briefly touch on the four sets of sanctions imposed on his country by the United Nations over Tehran's refusal stop enriching uranium and to prove Iran is not trying to build an atomic bomb.

Some members of the Security Council have "equated nuclear energy with nuclear bombs," Ahmadinejad said.

He accused the United States of building up its nuclear arsenal instead of dismantling it and reiterated his call for a nuclear-free world.

"The nuclear bomb is the worst inhumane weapon which must totally be eliminated. The NPT (Nonproliferation Treaty) prohibits its development and stockpiling and calls for nuclear disarmament," the Iranian president said.

Ahmadinejad hinted that Iran is ready for talks on its nuclear program provided they are based on "justice and respect", suggesting that the U.S. and its allies must stop pressuring Iran through sanctions before Tehran will sit at the negotiating table.

He again rejected the U.N. Security Council sanctions as "illegal," blaming the U.S. as the power behind the measures.

"Those who have used intimidation and sanctions in response to the clear logic of the Iranian nation are in real terms destroying the remaining credibility of the Security Council," Ahmadinejad said.

Ahmadinejad has in the past called the Security Council a "satanic tool" and has called its anti-Iran resolutions "not worth a cent." 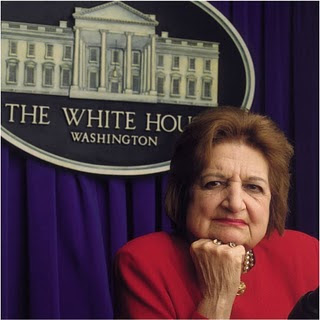 Veteran White House reporter Helen Thomas is retiring in the wake of controversial comments she made about Israel.

Hearst News Service, for which Thomas is a columnist, reported her retirement announcement Monday.

Her retirement is effective immediately. She began covering the White House in 1960.

Thomas has apologized for the comments, which were captured on video by an interviewer for the website “RabbiLIVE.com.”

On the May 27 video, Thomas says Israelis should "get the hell out of Palestine," suggesting they go to Germany, Poland or the U.S.

Those remarks drew sharp criticism from the Obama administration earlier Monday, as well as the cancellation of a high school graduation speech she was to deliver.

"She should and has apologized," Gibbs said. "Because obviously those remarks do not reflect certainly the opinion of most of the people here and certainly not of the administration."

Thomas had been scheduled to speak at the June 14 graduation of Walt Whitman High School in the Washington suburb of Bethesda, Md., but Principal Alan Goodwin wrote in a Sunday e-mail to students and parents that she was being replaced.

"Graduation celebrations are not the venue for divisiveness," Goodwin wrote.

She added: "They do not reflect my heart-felt belief that peace will come to the Middle East only when all parties recognize the need for mutual respect and tolerance. May that day come soon."

"Her suggestion that Israelis should go back to Poland and Germany is bigoted and shows a profound ignorance of history," Foxman said in a statement. "We believe Thomas needs to make a more forceful and sincere apology for the pain her remarks have caused."

Thomas, 89, began her long career with the wire service United Press International in 1943, and started covering the White House in 1960, according to a biography posted on her website. She became a columnist for Hearst in 2000.
www.msn.com
Posted by jmmb at 6:10 PM 1 comment: