Using "Noah's Ark" To Save Sealife

PANACEA, Fla. (AP) - On the chance that the Gulf of Mexico oil spill threatens some sea creatures with extinction, naturalist Jack Rudloe hopes his laboratory can save them.

Rudloe has launched Operation Noah's Ark, using his four-acre facility an hour south of Tallahassee to preserve more than 350 different specimens — everything from sharks to starfish, shrimp and batfish — in an environment that includes a grassland and duplicates high and low tides. And he's not doing it two-by-two. The fiddler crabs, for instance, number around 50,000.

"We have this endless supply of critters and water out there," said Rudloe, 67, whose enchantment with the Gulf and its inhabitants date back some 40 years. "We have to get as many animals in there as we can and then if the conditions permit, be able to put some of them back and get some things started."

Though the broken oil rig has been capped since mid-July and little heavy crude is visible on the Gulf, Rudloe said he's still committed to the project.

"I don't believe that the oil is gone," Rudloe said. "It's still out there in cold water, little tiny droplets that could come spilling up here in the wrong conditions of one or two hurricanes."

Rudloe's Dickerson Bay laboratory is about 20 miles from the easternmost point where oil has been reported on Florida's Panhandle. Still, he worries about oil fouling his 50 tanks, which use saltwater pulled through an 800-foot pipeline from the Gulf. He is installing filtration systems just in case.

"If everything is dead, the marshes are black, the water is foul ... we still want to keep the place going," Rudloe said. "We would have to have live support systems where we can keep things alive."

Rudloe estimates the project could cost $1.2 million. He can't afford that kind of financial hit, coming at a time his wife — noted marine biologist Anne Rudloe — is battling a serious illness. The nonprofit, licensed facility, which attracts about 18,000 visitors annually, depends on admission fees, memberships and donations.

"If anybody should come to anybody, BP should be coming to him and say 'OK,'" said Robert Seidler, a Sopchoppy, Fla., filmmaker who has observed the Rudloe's operation for decades. "Nobody has the collective knowledge of the area like the Rudloes do. Every trend, storms, floods, red tides. He knows all of that."

Rudloe, who provides specimens for university and medical research, is well known nationally among marine biologists.

A New York native who moved to Florida in his early teens, Rudloe, who is self-taught, has joined with his wife to write books on the Gulf ecosystem along with articles for National Geographic, Sports Illustrated and other publications. 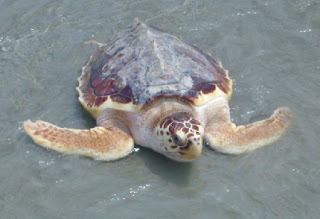 Rudloe has gotten some outside help since the spill. Pennsylvania-based Martin Marine shipped a $25,000 water-oil separator that Rudloe said could save the day, sifting out petrochemicals.

"We have a way to fight back. We can clean our water and go on living."

He will also use roughly 50 large water tanks to store "healthy seawater" to maintain hundreds of other critters, including sea urchins, sea cucumbers, sponges, sea horses and spinybox fish.

The BP spill isn't his first clash with oil companies.

In 1989, Rudloe cut his Exxon credit card in half and put it inside a plastic sandwich bag filled with oil to protest a spill created when the Exxon Valdez tanker dumped an estimated 32 million gallons of crude oil into pristine Alaskan waters after it grounded on a reef.

But that doesn't come close to the disaster threatening the Rudloe's lifetime of work.

"Where are the protections these companies were supposed to build in?" Rudloe asks. "I don't think anything really has been learned. We're just as dumb now as we were then."