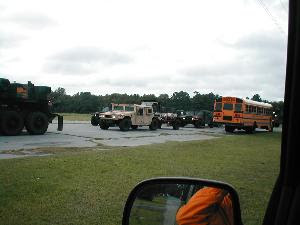 The guard units, escorted by the Virginia State Police came to prepare to assist local residents in the aftermath of Hurricane Irene.

A total of eight soldiers in four Humvees are conducting the support mission on Monday.

According to a Virginia National Guard statement, one adult and two children were transported from a stranded vehicle off Route 13 near Cape Charles to a local hotel around 4:45 a.m. Another three citizens stranded in their car for more than four hours were rescued around 6:30 a.m. in the Onancock area and taken to a local shelter.

The soldiers are also transporting emergency services personnel to work at the local hospital.

Governor Bob McDonnell declared a state of emergency in the Commonwealth of Virginia Saturday afternoon, a step authorizing state agencies to take precautionary action to prepare for any potential impacts of significant snow accumulation in the region. The declaration authorized the Adjutant General of Virginia to call up those resources he thinks necessary to ensure the Guard can fulfill its mission to provide snow recovery operations.

The Virginia National Guard receives their missions through the Virginia Department of Emergency Management to assist state and local emergency response organizations and is not able to respond to direct support requests from the public, Catrett said. "If the snow storm causes any conditions where people need assistance, they should request assistance through their local dispatcher or 911 service, not directly to the Virginia Guard. When appropriate, the request for assistance will be forwarded to us for action," he said.

Approximately 80 soldiers from the Hampton Roads and Richmond areas arrived around noon at Birdneck Elementary School to be reunited with their families and friends. 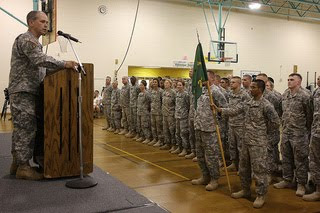 Another 40 soldiers from the Roanoke and Southwest Virginia area arrived at Patrick Henry High School about 90 minutes later.

The soldiers returned to the U.S. on July 23, arriving at their demobilization station at Fort Dix, New Jersey. There they conducted a number of different administrative activities to transition from active duty back to traditional National Guard status prior to returning to Virginia Beach. The soldiers began their tour on federal active duty on August 3, 2009.

While headquartered in Virginia Beach, the 229th is made up of soldiers from all over the state. Approximately 60 soldiers are from the Hampton Roads area.

Officials say the unit was expected to provide police training to the Iraqi Police, but was task organized and provided additional training to also conduct protection service detail missions. The unit was requested by name to provide route security for Vice President Joe Biden’s visit to Iraq on Jan. 22, 2010.

When the Iraqi national elections were conducted in March 2010, soldiers from the 229th helped maintain security, working side by side with Iraq Police. During the six-day time period of the elections, soldiers lived with their Iraqi Police counterparts at the Provincial Division of Police and the Patrol Headquarters.

The unit was also very active in conducting humanitarian missions while in Iraq. On their own initiative soldiers improved the conditions and safety at a local elementary school in West Rasheed, Baghdad as well as establishing a partnership with the adjoining hospital. In addition to distributing school supplies donated by family members, the company also filled in a sinkhole and installed 26 windows.

Soldiers in the company conducted more than 400 combat patrols and travelled more than 100,000 miles on Iraqi roads. The company provided personnel for traffic control points for several high level ceremonies to help make sure they were conducted safely.

No Virginia Guard Soldiers were killed or wounded in action during the company’s tour of duty in Iraq.