Courthouses in Newport News, Hampton and Portsmouth were evacuated this morning following a bomb threat this morning, according to police.

In Hampton, police closed the blocks of King and Lincoln Streets and Pembroke Avenue surrounding the courthouses. In Newport News, police have shut down 25th and 26th streets as well as Huntington Avenue to West Street.
www.dailypress.com
Posted by jmmb at 12:43 PM No comments:

PORTSMOUTH, Va. (WAVY) - About 16,000 Portsmouth residents showed up Tuesday night to vote on whether or not to recall their city's mayor, James Holley, in a special election.

The numbers were greater than in the recent council election, where only about 10,000 showed up to cast votes. Sixty-eight percent voted to recall Mayor Holley and 32 percent wanted Holley to stay in office.

The recall effort began with a round of complaints from one of his former assistants that he created a hostile work environment. The City Council voted to ask Mayor Holley to resign, and when he refused, a petition drive was initiated to force Holley out.

This is the second time Mayor Holley has been recalled, but is the end of a political career that spans 42 years.

Mayor James Holley did not want to hear the news.

"I want all the numbers," he said. And those numbers came in quickly at the voter registration office.

Robert Marcus, the architect of the recall effort, was there watching the returns.

"I have to tell you that I am shocked that this many people came out," he said

More voters came out than in the previous two city wide council elections, and the loss could not be misunderstood.

Holley did not want updates on the vote count.

"What are you trying to scare me out of office? Take it easy now," he said. "Wait till everything [has] been counted."

The mayor's son took the numbers and shared the news with his father. He was gracious in defeat surrounded by his children--the veteran of many political wars tried to put the election in perspective:

"I know you have some disappointment. Well, that goes in the political process. You win some elections and you lose some."

The supporters thanked Holley, and he urged them to stay engaged in the political process he has dedicated his life to, "...be involved in the democratic process, that you fulfill the responsibility to improve the quality of life for the Portsmouth family."

Councilwoman Elizabeth Psimas says the election showed voters want Portsmouth to have a mayor who can be a leader at the regional table.

"First we need to celebrate [Mayor Holley's] good service. Second, we must unify the city back together...there has been a racial divide...there have been hurt feelings...now is the time to come back together."

Preliminary analysis of the returns show Holley did well in predominately African American precincts, but the voter turnout there was not enough to make a difference. The predominately white precincts overwhelming voted against Holley.

The election will be certified at 2 p.m. Wednesday. Portsmouth City Council is scheduled to meet in closed session tomorrow at 5 p.m., where they may appoint an interim mayor until November, when a new mayor will be elected by the voters.\

What gets into these young adults that they just go so senseless at these concerts? Hmmm.... Get a grip on your lives, young people! Do you have to be the victim of tradegy? That's what everyone assumed and rightly so! Take responsibility for yourself. Stay safe and stay alive. 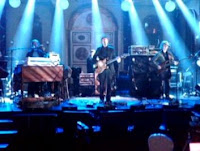 A 26-year-old woman from Fauquier County who came to see the Phish concert on Tuesday and got separated from her friends has been found safe, the Fauquier County Sheriff's Office said.

She was found in the Washington area and was following the band, authorities said.

Laura J. Pepe traveled to Portsmouth with a group of friends for the Tuesday night show at nTelos Pavilion. After getting separated from her friends and not being found, they returned home to Fauquier County without her.

Lt. James Hartman of the sheriff's office said he spoke with Pepe's father on Thursday morning, and she has been found safe. Her mother reported her missing at 11:30 a.m. Wednesday after Pepe did not return her mother's cell phone calls, Hartman said.

As momentum built in late July 1987 to bounce him from office, Mayor James Holley went on the offensive.

The city's first black mayor told a church audience that the people seeking his ouster - many of them influential black residents - were trying to "destroy the dream."

Three weeks later, when organizers submitted more than 10,000 signatures to force a recall election, two attorneys stood by Holley, mounting a legal challenge as some 90 supporters rushed to review the signatures.

In seven days, Holley's followers documented 16,157 problems, more than one for every name.

Almost a quarter century later, Holley is facing another recall. Again defiant, this time it appears he is fighting on his own.

Joe Wright, a civic leader from Cavalier Manor, was among those who actively opposed the last recall. He remembered going door to door and helping a committee that had its own headquarters. Wright said he'd help again if the mayor asked. Holley, 83, hasn't.

"I'm not going to say he's by himself, but the people are not as fired up about it, because most of the people really think it's time for him to step down," Wright said.

Still, Wright said he thinks Holley has enough support to keep him in office if a recall election is set.

Catherine D. Hendricks, 91, was among those who signed the challenges that one of Holley's lawyers filed against the 1987 recall signatures.

"I haven't heard one word, really, of trying to help him at all," she said of the latest effort. "Nobody has said anything to me."

Two residents, Robert Marcus and Delores Knight, submitted 8,775 names on May 6 to trigger the latest recall initiative. To force a recall election, they need about 6,700 to pass muster as the legitimate signatures of registered voters.

Circuit Judge Dean W. Sword Jr. has set a hearing for May 27 to rule on the signatures, which are under review in the registrar's office.

Holley has filed a legal challenge, this time on his own. The two lawyers who made his case in court in 1987 have died. Last week, Holley said he did not have an attorney.

The latest recall effort started last summer after Holley's assistant at City Hall reported that the mayor had verbally abused her and ordered her to do personal tasks for him on city time.

The other six City Council members fined Holley $2,500 and asked him to retire. He declined.

Holley was successfully recalled in 1987. He ran again and was re-elected in 1996.

The 1987 movement grew partially out of comments he had made during a heated exchange over the future of I.C. Norcom High School. Some black community leaders asked Holley to intervene and stop the school from closing. He refused, and he said he felt the group sent political threats his way for doing so.

Holley responded, according to newspaper accounts, by saying, "I pretty much got you where you are.... You won't be satisfied until you have a white mayor and all the City Council persons up here are white for another 200 years."

An effort to recall Holley began in earnest after he was implicated in a hate-mail campaign against several of the people who opposed Norcom's closing.

The commonwealth's attorney at the time, Johnny E. Morrison, concluded that Holley's fingerprints were found on some of the letters. Holley denied involvement and was never charged. Morrison is now Portsmouth's chief circuit judge.

Several of those who wanted to keep Norcom open included Louise Lucas, who is now a state senator, and Kenneth Melvin, now a circuit judge. Lucas said recently she is trying to stay out of the latest recall effort. 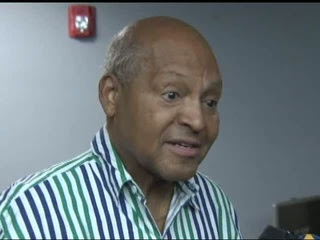 The 40-word challenge questioned the "genuineness of the signatures," of which there were nearly 9,000, and the "qualifications of the electors."

A judge will decide the legitimacy of the signatures on May 27.

If the judge rules that the amount of legitimate signatures constitute enough for a recall, Holley will have five days from that date to step down from office.

PORTSMOUTH, Va. (WAVY) - Petitions containing nearly 9,000 signatures were formally filed in Portsmouth Circuit Court Thursday seeking the recall of Mayor James Holley. If successful, it would be the second time Holley has been recalled as Portsmouth's mayor.

The petitions will now move relatively quickly through the courts. If a judge accepts the signatures and Holley still refuses to resign there could be a recall election in less than two months.

A group of citizens initiated the petition drive last September saying the last straw came when it was revealed that Holley had been ordering his city secretary to handle his personal errands like buying his clothes and purchasing gifts for friends and family members. City Council publicly scolded Holley, fined him $2,500 and formally voted to request his retirement. He refused then, as he continues to refuse to give up his post today despite the submission of the recall petition.

Portsmouth resident Robert Marcus helped spearhead the recall effort. "The mayor is not able to function as a leader," said Marcus. "We have an elderly man who is more inclined in his later years to enjoy having a nice wardrobe and a nice car to drive in, and his mind is not on the job and as unfortunate as it is, he is not willing to accept that reality."

WAVY.com caught up with Mayor Holley just moments after the petitions seeking his recall were filed. When asked for his thoughts on the nearly 9,000 signatures Holley responded, "Well, there are 100,000 citizens, so it wasn't everybody." 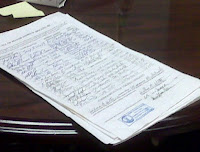 If the judge handling this civil case rules there are enough legitimate voter signatures he will give Holley five days to resign his post. If Holley refuses, the judge will order a recall election to be held about a month later.

WAVY.com asked Mayor Holley on Thursday if he intends to resign. "No I will not step down," he said. Holley also threw last year's apology to his secretary out the window Thursday. He told WAVY.com the dozens of chores he asked his assistant to handle were not personal chores, not even buying his clothes.

"Well, I wear clothing," shrugged Holley. "I didn't find that to be anything that was beyond her responsibility."

Holley also said he is not worried about the possibility of being recalled a second time. In 1987 Holley became the first mayor in Virginia to be recalled from office after he was said to have played a role in a racial hate mail campaign. "I am still the mayor," he said. "I think we have some positive directions which we are attempting to go and I am pleased to report that it happened under my leadership."

Recall organizers said city code required them to gather 6,772 signatures from registered voters. They said they collected 8,775. It took them nine months to get the signatures.

Marcus said, "We have taken this long because we wanted to do it right."

The 8,775 signatures will now be reviewed by a judge who will write up an order and send it, along with the petitions, to the Portsmouth Voter Registrar to validate as registered voters in the city of Portsmouth.