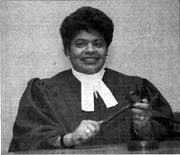 Judge Michele Hotten is now a member of the Maryland Court of Special Appeals, the state's intermediate appellate court.

She will represent the court's Fourth Appellate Circuit for Prince George's County.

Hotten fills a vacancy created by the retirement of Judge James Salmon.

She has been an associate judge for Prince George's County Circuit Court for 15 years.

RIVERDALE, Md. (AP) - Police say two women and two children have been found slain in a trash-filled Washington-area apartment that had no running water.

Prince George's County, Md., police say the amount of trash is hindering the investigation of the bodies found in the makeshift apartment above a detached garage at a home in Riverdale.

The victims were two women and a boy and girl under the age of six.

Officers found the bodies early Friday after responding to a call from someone at the property who reported an assault. Police wouldn't say how the victims died.

Police Chief Roberto Hylton said whoever killed the victims may have known them, and the slayings attack appeared to be "personal" rather than random.