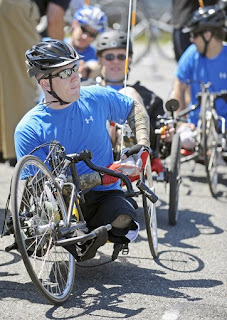 ( Written by: Brent Jones)
Sgt. Miguel Antia, an Army Airborne Ranger whose body is peppered with seven gunshot wounds from a 2005 attack in Iraq, survived that incident only to find himself suffering from a debilitating disease he contracted while on duty in South America last year.

Antia has spent the past five months at Walter Reed Army Medical Center in Washington, battling leishmaniasis, a disease caused by parasites that causes skin sores and spleen damage and nearly paralyzed him permanently. Bedridden until the past couple of months, Antia has since undergone a speedy and somewhat miraculous recovery, leaving him strong enough to participate Thursday in a 13-mile bike ride through Baltimore designed to help other injured veterans.

"I volunteered to do this ride because it is taking care of our own," Antia said. "It helps our morale. If your morale goes down, then everything else goes south."

Antia and more than 30 veterans of the wars in Iraq and Afghanistan are riding bikes for three days in Maryland to raise awareness for the Wounded Warrior Project, a nonprofit group that provides services to those injured in combat.

The cyclists departed Thursday afternoon from Under Armour headquarters in Baltimore for a three-hour ride, followed by trips to Andrews Air Force Base and Annapolis today and Saturday.

Most of the cyclists lost limbs during the wars and use adaptive equipment to bicycle.

Sgt. Larry A. Draughn Jr., 22, said he was participating in his first organized bike race. Draughn did so without his legs, which he lost after stepping on an improvised explosive device in Afghanistan last May.

Draughn spent months going from hospital to hospital, learning how to live with his injuries. 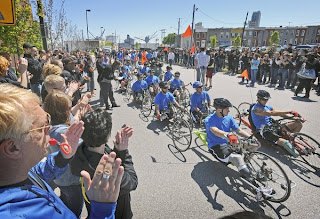 "It's great that people support us and the other wounded vets," Draughn said. He joined the Marines in January 2007 after proposing to his girlfriend. "I knew I was going to be starting a family, and I wanted to serve my country."

Army Sgt. Jack Schumacher lost his right leg last year after a bomb went off in Afghanistan. A Washington native, Schumacher, 25, has served since June 2005 and done tours in Iraq.

Dozens of Under Armour employees and other onlookers cheered the veterans as they set off for the Baltimore ride.

"It's awesome to see people come out and spend their free time with you just to support you," Schumacher said.

The project is in its seventh year, switching from cross-country rides the first three years to regional routes since 2007. 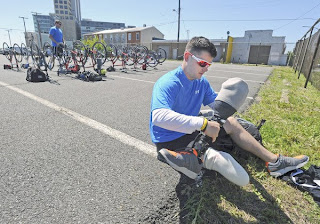 Vice President Joe Biden helped launch this year's tour, welcoming the veterans at the White House on Wednesday before they rode through the streets of Washington.

"We do it to assist the warriors in their rehabilitation," said Steve Nardizzi, executive director of the Wounded Warrior Project. "It gives them the opportunity to get out of the hospital and see that they can be physically active again."

The route took the riders from the Inner Harbor to Fells Point, through East Baltimore, Lake Montebello and Waverly, and back downtown.

It was Antia's first time participating, and he said he plans to use some of his vacation after he returns to duty to volunteer in future rides.

"I feel great," said Antia, originally from Greenwich, Conn. "Everybody helps each other push up hills. The support we get, it's good."