Only Woman On Death Row Gets Rejected By Federal Appeals Court 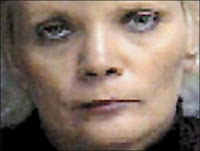 RICHMOND, Va. (CBS/AP) Teresa Lewis pleaded guilty to murder in 2002 for masterminding a plot that left her husband and stepson dead. Prosecutors said her intent was to collect the insurance money and inherit her husband's estate.

Shortly after that, Lewis became the first female death row inmate in Virginia in more than 90 years, but her appeals attorneys argued Tuesday that she should be spared the death penalty, because she was too dependent on drugs and other people to mastermind anything.

James Rocap, Lewis' attorney, argued that her trial attorneys should have presented hundreds of pages of medical and pharmaceutical records showing her increased dependency on prescription drugs following her mother's death, and expert testimony showing that a disorder made her especially dependent on men.

"She was not a person who could have come up with this," Rocap said.

Katherine Burnett, a senior assistant attorney general, painted an entirely different picture of Lewis, saying that she bragged to two friends that she was marrying Julian Lewis, Jr. for his money, came up with the idea to kill him and his 25-year-old son, Charles, and offered the two gunmen sex in return for helping her as well as buying the weapons used in the crime.

The gunmen, Rodney Fuller and Matthew Shallenberger, were sentenced to life in prison.

Lewis' daughter, Christie Lynn Bean, who was 16 at the time, served five years because she knew about the plan but remained silent.

David Furrow, Lewis' defense attorney when she pleaded guilty in 2002, said he had expected the judge to sentence Lewis to life in prison.

But at her sentencing, Circuit Court Judge Charles Strauss said that she appeared cold and emotionless throughout the proceedings, that she seemed to have no other motive besides financial gain, that he saw her as a continuing threat to society, and sentenced her to death.

Execution Set For Tonight In Richmond

Unless the U.S. Supreme Court steps in, Darick Demorris Walker will die by injection tonight at 9 at the Greensville Correctional Center for the capital murder of two Richmond men.

His lawyers filed appeals and a request for a stay of execution on his behalf with the high court this month. Gov. Bob McDonnell turned down his plea to intervene last week.

Walker, 37, was convicted in a 1998 trial of shooting two men to death in front of loved ones. State law permits the death penalty for someone who commits two premeditated murders within three years.

Walker accused Beale of coming to his door to look for him. Beale did not know Walker.

Threat’s girlfriend said Walker once had asked her for a date but said she turned him down because she was committed to Threat.

Members of the victims’ families had not responded to requests for comment as of yesterday evening.

Walker’s lawyers argue that he is mentally retarded and therefore ineligible for the death penalty. A split panel of the 4th U.S. Circuit Court of Appeals ruled that Walker had not proved that he fit the legal definition for mental retardation.

His lawyers argued in a petition to the U.S. Supreme Court that Walker’s joint trial for the unrelated murders “exposed him to the serious risks that two weak cases would bolster one another, and that the jury might convict based on a presumed propensity for crime.“

They also contend that authorities improperly withheld evidence that could have challenged the credibility of a key witness. They said Beale’s 13-year-old daughter originally told police she heard but did not see the shooter but testified later that she saw Walker shoot her father.

Walker’ s lawyers did not learn of the girl’s earlier statement until after the trial.

A social history prepared on Walker’s behalf in 2003, when he was 30, said he functioned at the level of an 11-year-old, that he may suffer from fetal alcohol syndrome, and that he has a family history of both mental illness and mental retardation.

His lawyer, Danielle Spinelli, said in an e-mail this week that Walker and his family were not speaking to the media.

Larry Traylor, spokesman for the Virginia Department of Corrections, said no victim family members had requested to witness the execution. Walker’s would be the second execution in Virginia this year and the 107th since the death penalty was allowed to resume in 1976.

Virginians For Alternatives to the Death Penalty will hold a vigil outside the Greensville Correctional Center tonight at 8:30. Vigils also will be held at churches and other sites across the state. For details, go to http://www.vadp.org/.

Gov. Bob McDonnell has turned down a request to intervene in Thursday's scheduled execution of Darick Demorris Walker, leaving the U.S. Supreme Court as his last hope to avoid death by injection.

Walker, 37, was convicted in 1998 of shooting two men to death in Richmond in front of loved ones. State law permits the death penalty for someone who commits two premeditated murders within three years.

Walker's lawyers have asked the U.S. Supreme Court to grant a stay of execution so it can consider his appeals. He is set to die by injection Thursday at 9 p.m. at the Greensville Correctional Center in Jarratt.

In a prepared statement yesterday, McDonnell said, "Walker's attorney recently submitted a letter listing the reasons why I should intervene in this execution. I have read the letter and considered the reasons set forth.

In papers filed with the U.S. Supreme Court, Walker's lawyers contend his joint trial for the unrelated murders, "exposed him to the serious risks that two weak cases would bolster one another, and that the jury might convict based on a presumed propensity for crime."

In addition, Walker's lawyers say authorities improperly withheld evidence that could have challenged the credibility of a key witness. Beale's 13-year-old daughter, who told police she heard but did not see the shooter, testified that she saw Walker shoot her father.

Walker's lawyers did not learn of the girl's earlier statements until after the trial.

Walker also argues that he is mentally retarded and therefore ineligible for the death penalty. A split panel of the 4th U.S. Circuit Court of Appeals held that Walker had not proved that he fit the legal definition for mental retardation.

Danielle Spinelli, one of Walker's lawyers, said this month, "We very strongly believe that the death penalty may not legally be imposed in Mr. Walker's case in light of his documented mental deficiencies and the pervasive constitutional violations that occurred during his trial and sentencing."

The Virginia attorney general's office is asking the U.S. Supreme Court to allow the execution, arguing that Walker already has had a "staggering" number of appeals.