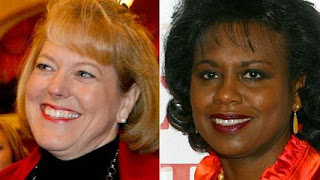 U.S. Supreme Court Justice Clarence Thomas was narrowly appointed to the bench almost 19 years ago to the day after a notoriously bitter confirmation process in which he was accused, but never found guilty, of sexual harassment by a former colleague named Anita Hill. His wife, Virginia Thomas, has never quite gotten past that ugly episode, it seems.

Just this weekend, she reportedly left a voice mail on Hill's answering machine to the following effect, according to an ABC News investigative report:

"Good morning, Anita Hill, it's Ginny Thomas," said the voice, "I just wanted to reach across the airwaves and the years and ask you to consider something. I would love you to consider an apology sometime and some full explanation of why you did what you did with my husband. So give it some thought and certainly pray about this and come to understand why you did what you did. Okay have a good day."

Hill, who is now a professor at Brandeis University in Massachusetts, said she "initially thought" the message was a "prank," but went ahead and forwarded it to campus police, who passed it along to the FBI, The New York Times reports. 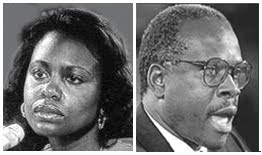 When contacted by reporters, Virginia Thomas responded: "I did place a call to Ms. Hill at her office extending an olive branch to her after all these years, in hopes that we could ultimately get past what happened so long ago." When told of the response, Hill said that she would not apologize since she had testified to the truth of her experience so many years ago.

In the confirmation hearings, Hill told the Senate that back when Thomas was her boss at the Department of Education, she repeatedly declined his invitations for the two of them to go out socially before he began "to use work situations to discuss sex" of a graphic and sadistic nature in vivid detail. At the time of the alleged harassment, Thomas was married to another woman, Kathy Ambush, whom he later divorced.

Thomas steadfastly denied all of Hill's accusations and countered that she was just a minor part of the larger plot against him, which he characterized as a "high-tech lynching for uppity blacks," though it's worth noting that Hill herself is African-American.

Hill's testimony was a political bombshell in what had already been a fairly contentious confirmation process: Even before her words went public, many black-activist and liberal groups opposed Thomas, a noted conservative-leaning judge and the second black nominee in U.S. history. After she spoke, a number of women's groups, including congresswomen, also joined their voices in opposition. Still, Thomas ended up getting appointed by a slim majority vote, 52-48.
For her part, the second Mrs. Thomas, nee Lamp, has also courted controversy of her own: Last year, she launched Liberty Central Inc., a nonprofit tea party activist group that opposes President Barack Obama's "hard-left agenda," a move that many liberals denounce as a clear conflict of interest when it comes to her husband's role as a Supreme Court justice (though it is technically legal).

She gave no indication to reporters why she was "reaching out" to Hill on this occasion, after so much time.