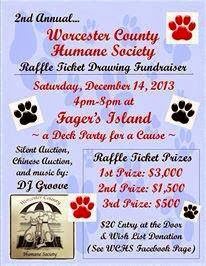 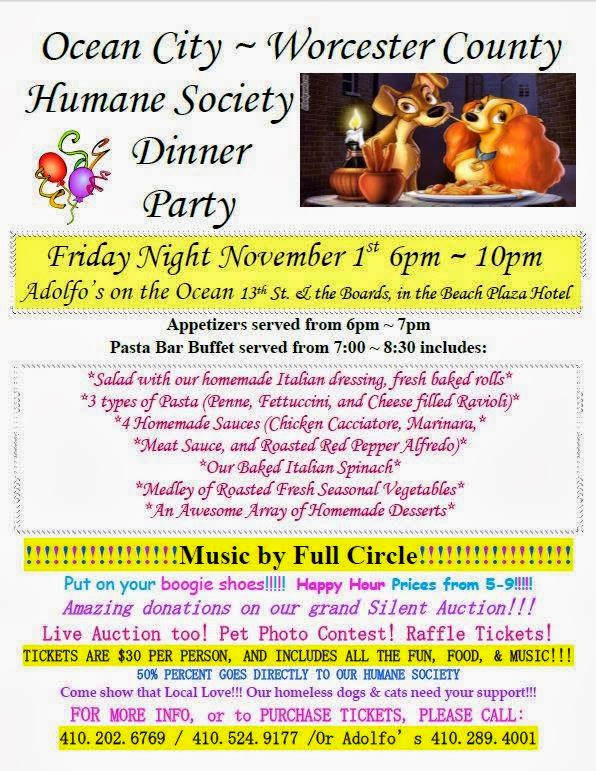 12th Annual Board Walkin' For Pets

The Worcester County Humane Society  Could  Use Your Help
Lisa Capitelli
Staff Writer
Dog owners will have an opportunity this Saturday to take their four-legged friends for a stroll along the Ocean City Boardwalk, while helping to raise funds for the Worcester County Humane Society, during its 12th annual Board Walkin’ for Pets event.
The activities are scheduled to begin at 9 a.m. at the southern end of the Boardwalk. Registration will take place in front of Harrison’s Harbor Watch restaurant.
Several contests will be held prior to the walk. Prizes will be awarded to the largest and smallest dogs, the canine that performs the best trick, the best dressed and the sloppiest kisser. A special prize will also be presented to the dog that most resembles its human owner.

Although the walk is for dogs, felines won’t be left out, said event co-orga- nizer Kelly Austin, secretary of the Worcester County Humane Society. Owners may submit a picture of their cat for the fifth annual Cutest Cat Photo Contest. The winner will receive a gift basket.
After the contests, owners and their dogs will be free to walk as far as they want on the Boardwalk.
Refreshment stops with drinks and snacks will be set up for dogs and owners near 12th and 27th streets.
For a $25 donation, walkers will receive a bandanna for their pooch. Participants who raise $50 will get a dog walk T-shirt and a bandanna, and walkers donating $100 or more will take home a tote bag, T-shirt and a bandanna. The walk is not only an enjoyable outing for the whole family, but the dogs seem to have a good time as well. Many people also come back year after year to participate, Austin said.
The person who pledges the most money will win the grand prize gift basket filled with goodies donated by local businesses. The youngster age 12 or younger who collects the most donations will also take home a gift basket.
A total of 283 people registered to walk a dog during the 2010 Board Walkin’ for Pets fundraiser. Austin said approximately $22,000 was raised for the shelter last year, which was about half of the amount collected during the 2009 walk. She attributes the decline in funds to the economy.
“This is the largest fundraiser we do, so we’re hoping to do much better this year,” Austin said.


Funds generated through the walk go toward the general costs of running the no-kill nonprofit shelter. Those expenses include food bills, cat litter, veterinary care such as spaying or neutering, vaccines, heartworm and flea preventive, medicines, shots, cleaning supplies and maintenance. Approximately $100,000 is spent annually on veterinary costs and $700 weekly on pet food.
Austin said about a dozen shelter dogs will be walked by volunteers this year. That number is down from last year because, during the last two months, several dogs have been adopted. All shelter dogs will wear “adopt me” bandannas.
At this time, there are approximately 30 dogs and more than 100 cats staying at the shelter.
Tickets for the Worcester County Humane Society’s $10,000 cash raffle will be sold during walk registration. The cost is $20 per ticket. They can also be purchased at the shelter on Eagles Nest Road, off Route 611 in West Ocean City, or at Healing Hands Animal Hospital on East Main Street in Salisbury. The winning ticket will be drawn during the humane society’s annual dinner in November.
For more information, call 410-213-0146 or visit www.boardwalkinforpets.com. 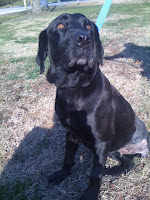 OCEAN CITY – Worcester County Humane Society (WCHS) has sheltered and cared for a dog whose fight for life deserves for her Christmas wish to be answered.

According to Meggin McKnight of the Worcester County Humane Society, Jazz was left on the shelter’s doorstep a few months ago.
Jazz is the mother of the puppy featured in the beginning of October that was adopted by a family from Baltimore via Facebook.
“She was almost starved to death and was skin and bones with the exception of her swollen belly,” McKnight wrote. “A trip to Dr. Manniaty confirmed that she was indeed pregnant with 15 puppies.”
Out of the 15 puppies, only seven survived.
“They were all quickly adopted but Jazz remained,” she said.
Once the puppies were delivered and adopted, Jazz’s struggle remained.
“We were aware that she had some trauma to her hind legs as there were pins holding her ankles together,” McKnight wrote.
While being spayed, the doctor and staff discovered that her ankle was severely shattered and her hip was dislocated. She eventually stopped using that leg due to the pain. It was determined that she would have to loose that leg.
“We feared that she had bone cancer,” McKnight said. “However, Jazz finally caught a break when the biopsy showed no sign of cancer.”
Jazz’s surgery was a success, according to McKnight, who said, “she gets around almost better than before.”
After everything that Jazz has gone through, she continues to be sweet and loving, all at the shelter agree.
“It is nothing short of amazing,” McKnight said.
Jazz remains in foster care during recovery. Although she receives the proper attention, her follow-up visits to the vet and medication costs are astounding.
“We want to reach out to this amazing community of ours in the hopes that someone could possibly help us with her vet bill,” McKnight wrote.
Call the shelter at 410-213-0146 to help Jazz with her care or to check up on her adoption status. Jazz is also featured on the Worcester County Humane Society Facebook page.
www.mdcoastdispatch.com
Posted by jmmb at 9:55 AM No comments: