VIRGINIA BEACH — A motorist's body was recovered Tuesday from a vehicle that went off the Chesapeake Bay Bridge Tunnel.

Virginia Beach police spokesman Adam Bernstein said investigators believe there was only one body in the vehicle, after previous reports indicated there may have been two. The victim was driving in a Toyota Avalon.

The victim was identified as Jean Calcagno, 51, of the 2500 block of Kentucky Derby Drive, Virginia Beach.

Bernstein said that the vehicle was found by a private diving company, which was brought in during the joint search effort that involved bridge tunnel personnel, the U.S. Coast Guard, the Virginia Marine Police, the Virginia Beach police and fire departments, and other agencies.

The body was recovered during the third diving attempt by the private company, Croft Diving Corporation. “They had better equipment than us and were able to perform longer dives,” Bernstein said Tuesday evening.

The bridge was closed to southbound traffic for several hours. It was not clear how far in the water the car had traveled before divers were able to spot it.

Tom Anderson, deputy director for the Chesapeake Bay Bridge Tunnel said it appeared the car was going at least the speed limit, 55 mph, when the crash occurred and that the vehicle had crossed through guardrail into the water.

There were no injuries.

The tractor trailer was headed to North Carolina on the southbound trestle when the fifth wheel hitch failed and the trailer became separated from the rig careened across the guard rail and fell into the bay. The accident occurred at mile post 12.

According to Bridge Tunnel Chief Executive Officer Jeff Holland, the trailer then drifted east under the northbound trestle and then sunk. Rough waters on Saturday prevented salvage of the empty trailer.Traffic on Southbound lane of the CBBT was halted for approximately 35 minutes.
Meanwhile, an accident on Rt. 13 near Nandua High School closed Rt. 13 South of Onley for several hours. Traffic had to be rerouted around the accident and was not back to normal for several hours.
www.shoredailynews.com
Posted by jmmb at 7:00 AM 2 comments:

Trailer Goes Over Side Of Chesapeake Bay Bridge -Tunnel 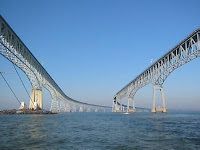 High winds caused a trailer to come loose from a tractor and fall over the side of the Chesapeake Bay Bridge-Tunnel Saturday morning at the 12 mile mark, according to tunnel police.

Chief Edward Spencer said the trailer was empty and no one was injured.

As of mid-day, the Chesapeake Bay Bridge-Tunnel has issued a Level 2 advisory for winds of about 47 mph.