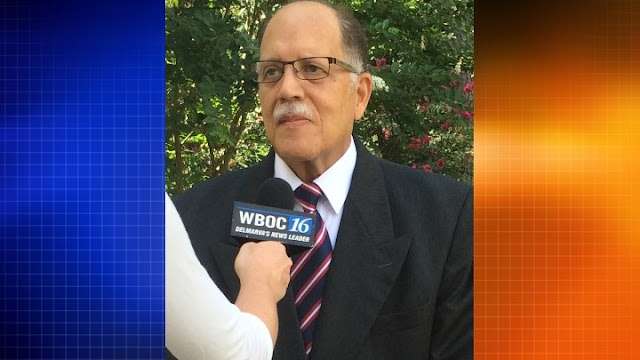 POCOMOKE CITY, Md. – The Town of Pocomoke City is getting ready to welcome a new police chief, months after the controversial firing of its previous chief.
William “Bill” Harden of Delmar tells WBOC he will begin the job on or around October 1.
Pocomoke City Manager Ernie Crofoot introduced Harden at Tuesday night's meeting. Crofoot said he was selected from eight candidates.
Harden’s previous employment includes 25 years with the Maryland State Police. He also served as a courtroom bailiff in Wicomico County and as an internal affairs investigator at the Wicomico County Detention Center.
Harden says he hopes to make the Pocomoke City Police Department the best in the country in spite of its recent turmoil.
"I understand and I have internalized what some of the issues are with Pocomoke,” he said in an exclusive interview Wednesday. “My job is to be the police chief. I'm not there to run the county council, I mean the city council, anything like that. I'm interested in running the Pocomoke City Police Department."

http://www.wboc.com/story/29993891/pocomoke-city-officials-introduce-new-police-chief
Posted by tk for PPE at 5:39 PM 4 comments: 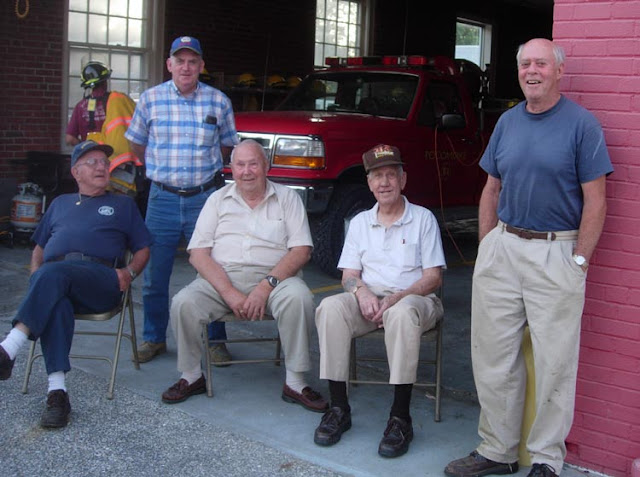 
A 26-year-old Pocomoke City man died in a single-vehicle crash on Route 113 between Snow Hill and  State Police said.
Kyle Barton Brittingham was driving south on Route 113 north of Betheden Church Road just before 8:48 p.m., police said.
A preliminary investigation shows his 2006  traveled onto the shoulder for an unknown reason and continued southbound, police said. It then went across both travel lanes and into the median, then overturned several times with the driver being ejected, police said.
Police said Brittingham wasn’t wearing a seat belt and alcohol is believed to be a factor. He was pronounced dead at .
The investigation is continuing.
Posted by tk for PPE at 7:36 AM No comments:

PPE UPDATE: The accident victim was identified as 64-year-old Worcester County resident Harrison Smith. It was reported that a medical situation may have contributed to the accident.


On August 23, 2015, at about 1:58PM, officers from the Pocomoke City Police Department responded to the area of Market Street and Tenth Street, in reference to a single vehicle collision, where the operator of the vehicle struck a telephone pole at that location as well as struck a fire hydrant a few streets prior. The only occupant of the vehicle was the operator. The operator of this vehicle was transported by EMS to PRMC for further evaluation and later died.

PPE post by tbayers
Posted by tk for PPE at 2:02 PM No comments:


POCOMOKE CITY, Md. – The American Civil Liberties Union of Maryland has filed a second complaint in a month against Pocomoke City officials for violations of the Maryland Open Meetings Act (MOMA).The latest complaint concerns unannounced, closed meetings held by Town Officials in late June,  during which the decision was made to fire Pocomoke’s former Police Chief, Kelvin Sewell. The complaint was filed with the Maryland Open Meetings Compliance Board on behalf of Stephen Janis, a reporter for The Real News Network, a Baltimore-based non-profit news organization. As with the ACLU’s first complaint, which pertained to the media being barred from a Pocomoke Council meeting on July 13, this complaint again relates to Pocomoke City’s controversial firing of Sewell. At the time of the firing, no explanation was given for the town’s action, and many in the community were angry and upset. Pocomoke officials have so far remained silent about the process and basis upon which they arrived at their decision to terminate Chief Sewell.
Posted by tk for PPE at 5:47 AM 17 comments:

Kallie Speta was selected by the  Pocomoke City Volunteer Fire Company and Ladies Auxiliary as Miss Fire Prevention for 2013-2014. 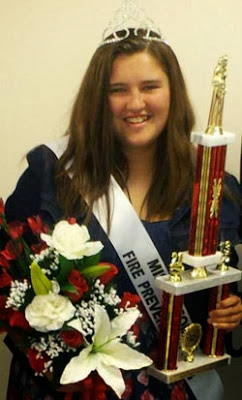 CONGRATULATIONS, KALLIE!
Posted by jmmb at 11:16 AM No comments: 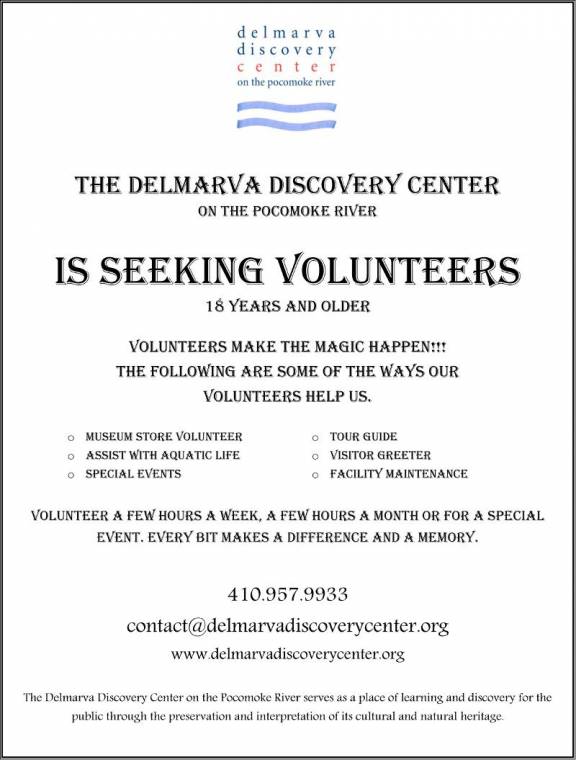 Phillips Trial Over- Verdict Is In 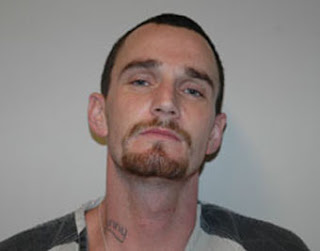 The  retrial for Charles Robert Phillips, convicted murderer of William Nibblett (Nib) on March 5, 2008 has ended.

In 2012 the  Maryland's Court of Appeals claimed that Philip's Miranda Rights may have been violated and his case was sent back to the office of Beau Oglesby the State's Attorney for Worcester County.

In what was expected to be a 4 day trial concluded this afternoon.
Charles Robert Phillips murdered Nib in his home back in 2008 just one day after being released from the Wicomico County jail.

William Nibblett (known by all as "Nib") was a well-liked local Pocomoke City plumber and father of two. Phillips already with a crime-filled past was sentenced in April 2009 to life in prison for the first-degree murder of William Nibblett.

In the outcome of Phillips  retrial he was found: 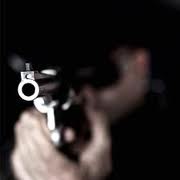 
On Sunday, March 17 at approximately 4:54 pm, the Accomack County Sheriff's Office received a report from the Eastern Shore 911 Center of a subject shot at the Pine Ridge Trailer Park in Melfa. Upon the arrival of Deputies, it was determined that an altercation had occurred between several individuals resulting in multiple gunshots being fired.

One subject received a gunshot wound and was transported by Melfa Rescue to Riverside Shore Memorial Hospital and later transferred to a Hampton Roads area hospital where he is listed in stable condition.

Through the investigation into this incident, a suspect was identified and warrants were issued against 20 year old Christopher Monfiston of Belle Haven for one count of Malicious Wounding, with additional charges pending.

Assisting with this incident were officers from the Parksley and Onancock Police Departments.

Anyone with information into this incident or the whereabouts of Christopher Monfiston is asked to contact the Accomack County Sheriff's Office at 757-787-1131 or 757-824-5666.
Posted by jmmb at 2:04 PM No comments:

Harmon Murder Trial Will Be Rescheduled

CHARLENE SHARPE
STAFF WRITER
SNOW HILL -- A Worcester County Circuit Court Judge postponed the trial of murder suspect Skylor Dupree Harmon at the request of the defense.
Judge Thomas Groton granted the postponement request from defense attorney Denise Fried. The trial, which had been set for May 9-12, will be rescheduled.


"With the trial on Monday, with him facing the rest of his life in jail, we need time to prepare," Fried said.
Harmon faces first-degree murder charges from his alleged role in the May 2010 death of Virginia resident Reginald Jerome Handy Jr.
Alexander Crippen, 36, was originally charged with the crime, but the charges were dropped, and he was later convicted of trying to kill a different man. At the time, prosecutors said the forensic evidence that cleared Crippen of murder charges in Handy's death was also helpful in identifying Harmon as the suspect.
Fried told the judge she needed time to go through the transcripts from Crippen's case to study testimony of witnesses who might be testifying against Harmon. She also wants to transcribe the audio tapes associated with the case and to give Harmon the chance to listen to them.
Harmon was identified as the primary suspect in Handy's death in December. According to court documents, the night Handy was shot at 503 Laurel St. in Pocomoke City, a witness saw a flash of a gun go off beside 500 Young St., which parallels Laurel Street. A witness told police that immediately afterward, he saw Harmon near the flash. Police later found a .223 Bushmaster assault rifle between 500 and 502 Young St., which was determined to be the weapon used to killed Handy, according to court documents.
Fried said the postponement would also give her time to consult an expert regarding the bullet that killed Handy. She said the bullet could not necessarily be traced to the gun found at the scene.
In separate court cases, Harmon was also charged with resisting arrest, failure to obey law enforcement, possession of a controlled dangerous substance, disorderly conduct, making a false statement to a police officer, malicious destruction of property and obstructing and hindering.

Special Tribute Given To Lippoldt and Torres

Written by:
Bill Kerbin
POCOMOKE CITY -- The members of the Mar-Va Theater Performing Arts Center paid a special tribute to two longtime volunteers at an annual dinner. Curt Lippoldt(left in photo) and Arnold Torres (right) were honored; both had served as president of the center.

Lippoldt's involvement in the restoration of the historic theater began in the days he was mayor of Pocomoke City. He later served as historian for the theater and, in 2002, began five years of service as president. Stepping down as president in 2007, he took on the job of restoration chairman; he then served as treasurer until this past December.

Torres joined the board in 2005, serving on the finance committee and the restoration team. He accepted the presidency in 2007 and led the center until this past December when the present president, Laura Morrison, was named to the post. Morrison also complimented Torres for compiling a photographic history of events at the theater.

Expressing his pride in the community, Torres thanked the members of the board for bringing the "Mar-Va back to life." The theater had been closed for a number of years prior to the formation of MTPAC, which later assumed ownership.

Lippoldt said that with his service on the board he had gained so many new friends. He was pleased to see so many people dedicated to the community. He added that Torres had done a "great job" in his service as president.

A third former president of MTPAC, Don Malloy, was also recognized for his service.

Morrison also announced that the organization has created another award, "Volunteer of the Year," to be given to someone who is not a member of the board. The award, this year, was given to Carol Justice. Justice took on the responsibility of ordering all the movies and returning them after they were shown, until the theater employed a manager, Emily Rantz. She also organizes the volunteers for the Friday night movies as well as being on hand herself.

The theater, which has been restored to its original condition, presently features movies every other weekend, with the movie, "Mars Needs Moms," planned for April 1-2. On April 9, the well-known Glenn Miller Orchestra will be on stage.

Please make note that the mudbog races are split this year between Crisfield, Maryland and Gumboro, Delaware.

For more information: www.gumboromudbog.com
Posted by jmmb at 7:40 AM No comments:

At The Marva Theater

Registration For Pageant Has Been Extended

Registration for the Miss Hope Eastern Shore has been extended until March 18th!
Looking for participants 11 to 12 years old.

For registration information go to www.bringyourbling.net Registration form can be filled on line.

REGISTER TODAY! TIME'S RUNNING OUT!
100% of the proceeds from this pageant will be donated towards the care of Courtney Bloxom.
Posted by jmmb at 8:15 AM No comments:

Congressman Scott Rigell has announced in addition to staff office hours in Accomac, members of his staff will be in Eastville the 3rd Tuesday each month to meet with constituents 9:30am noon.

Rigell will also have constituent office hours in Chincoteague on the second Wednesday each month at Town Office 9:30 am to noon.

Congressman Rigell urges the constituents to take advantage of these office ours to come in for assistance or just to express opinions or concerns.

Friday Is Final Day To Register As A Candidate

POCOMOKE CITY -- Friday is the final day those interested in running for mayor or the District 3 City Council seat can file with the town to run in the April election.

Anyone wishing to run for mayor must be 25 years old, a resident of Pocomoke City for at least one year prior to the election and be a registered voter.

Those running for City Council have to be 21 years old and live in the district up for election. The election is scheduled for April 5.

CONGRATULATIONS TO THESE WONDERFUL PEOPLE OF POCOMOKE!

POCOMOKE CITY -- The Pocomoke City Chamber of Commerce, at its annual awards dinner, honored Jason Blair, of Floors Decor and More, with the "Businessperson of the Year" award.