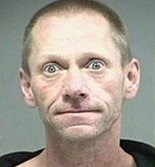 A homeless man who sneaked into a Beaverton hot tub, then called 9-1-1 to ask for towels, hot chocolate and a hug got cold comfort from police instead.

Mark Eskelsen called emergency dispatchers from his cell phone about 7:10 a.m. Sunday, identified himself as "the sheriff of Washington County," and asked for medical help.

The dispatcher asked Eskelsen, who later admitted he wasn't the sheriff, what was wrong.

"Well, I've been yelling for about an hour and a half," Eskelsen said.

But the dispatcher already knew that. Neighbors had called 9-1-1, concerned about the man bellowing from a fence-surrounded pool in the 15000 block of Southwest Village Lane.

Eskelsen said he had been sitting in the water for about 10 hours. His towels had gotten wet, and his fingers looked like prunes.

"I just need a hug and a warm cup of hot chocolate with marshmallows in it," he told the dispatcher.
Beaverton police officers arrived, found Eskelsen naked in the tub, and arrested him on accusations of second-degree criminal trespass and improper use of the 9-1-1 system.
www.oregonlive.com
Posted by jmmb at 8:24 AM No comments: 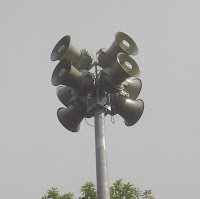 SNOW HILL -- On Saturday, Aug. 7, Worcester County emergency alert signals will sound from area fire sirens. The signals are tested the first Saturday of each month. A steady alert tone will sound at 10 a.m. for approximately one minute.

In the event of an actual emergency, the sirens would be used as additional means to warn the surrounding communities of imminent danger and the need to tune to either radio, television or the internet for information.

ONLEY -- Four men -- none of them particularly strong -- lifted a Ford Contour off of a 19-year-old man trapped under it on Memorial Day Sunday, likely saving his life with a feat they say could not be repeated under normal circumstances.

I have heard about things like this, but never experienced anything like what happened that day," said Mark Williams, 53, of Onley.

Williams and Greg Lee, 33, who weighs about 160 pounds, were driving north on Redwood Road on May 30 near Onley when they saw a woman in the middle of the road waving for them to stop.

"She was pointing to the field and saying a car was overturned," said Williams, who said the accident occurred about a mile from the turn to enter Nandua Middle School. "From the direction we were driving, we would never have seen it."

When Williams arrived at the scene of the accident some 75 feet off the road, he saw a young woman frantically screaming that her boyfriend was trapped under the car.

"By this time a man who looked to be in his 70s and a Hispanic man, smaller than me -- and I only weigh 150 pounds --were there," said Williams. "I could see the shoes of someone sticking out from under the car. The elderly man said, 'OK, boys, let's lift this car up.' And in one fell swoop, we lifted that car up on its side. I was afraid I was going to see something that would take me a long time to get over."

Under the car was Deshawn Ames, 19, of nearby Melfa, who was pulled gently away from the smoldering car.

"He was gasping for breath, and you could tell he was hurt," said Williams.

Later that day Ames would be transported to Sentara Norfolk General Hospital by Nightingale Air Ambulance. He had suffered a collapsed lung, cracked ribs and a broken pelvis.

Ames, who was not wearing a seat belt, was ejected from the car after his girlfriend, Joanna Sturgis, 19, lost control of the vehicle after a rear tire blew out. 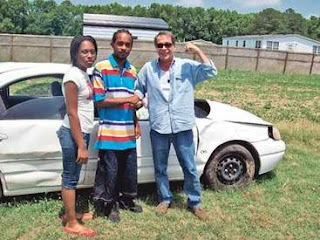 "I was driving when all of a sudden the car swerved to the right, and I couldn't control it. The next I knew we hit the ditch and the car starting tumbling," said Sturgis, who was told by an eyewitness to the accident that the car flipped three times before coming to rest on its roof.

Sturgis was wearing a seat belt and trapped in the driver's seat when she heard a woman telling her to crawl out.

She told me to unbuckle my seat belt and then helped me to crawl out," said Sturgis, who suffered some facial abrasions and lost some teeth but was otherwise uninjured.

"She asked me if there was anyone else in the car. That's when I couldn't find Deshawn and started screaming. I then heard him yelling, from under the car," said Sturgis.

Ames said he doesn't recall anything from the accident.

"I do know I will always wear a seat belt from now on. Tell everyone they should wear a seat belt. I am lucky to be here, and I can thank those men who lifted the car off of me," said Ames.

Once the car was turned on its side to free Ames, someone suggested the men flip the car again to get it upright.

We couldn't budge it," said Williams. "It was one of those situations where adrenaline took over and allowed us to do what was needed to help that man. I don't think we could have moved that car in a normal situation, but it just wasn't his time to go," said Williams, a real-estate agent with Coldwell Banker Harbour Realty.

Sturgis said Onley Fire and Rescue arrived about three minutes after Ames was freed by the good Samaritans.

"It was amazing how quick they responded," said Sturgis. "I couldn't believe they could get there so fast."

"Everyone who helped melted away when the rescue squad got there," said Williams. "No one got names. I don't know the names of the two men who helped Greg and me."

Sturgis said she doesn't know the name of the elderly woman who helped her out of the car nor the woman who flagged down passing motorists.

"I just want to thank everyone who helped. I am so grateful to them all."

Williams, who visited Ames at his home on Sunday, received a big handshake and a hearty thank you. Getting around with the aid of walker, Ames followed Williams outside, where the crumpled car was in the back yard.

Three good-sized friends of Ames, who were also visiting, attempted to lift the car. The tires never cleared the ground.