Target, The Dog Who Survived The Afghan War Mistakenly Put To Sleep

Target, the dog who survived Afghan war and melted hearts on Oprah, mistakenly put down at Arizona animal shelter

As a stray on the war-ravaged streets of Afghanistan, she had been shot by the Taliban and blasted by explosives. In fact, the plucky German Shepherd cheated death so often that U.S. soldiers named her Target.

She had even become a life-saving hero by sniffing out a suicide bomber on a military base. But, sadly, these dangers paled against the threat from a clerical error at a U.S. dog pound. An employee at the Pinal County facility was today on administrative leave after euthanizing the shepherd mix by mistake.

'When it comes to euthanizing an animal, there are some clear-cut procedures to follow,' said Ruth Stalter, director of the Animal Care And Control centre.
'Based on my preliminary investigation, our employee did not follow those procedures.'

Sgt. Terry Young, the owner of the dog, told The Arizona Republic, 'I just can't believe that something like this would happen to such a good dog.' 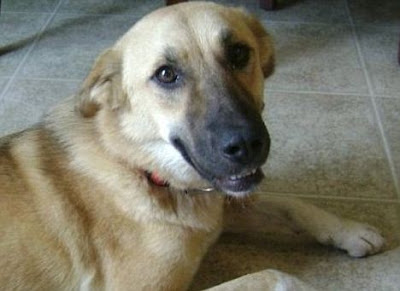 Target and two other dogs, Rufus and Sasha, were mutts who befriended soldiers stationed in Afghanistan, who began to feed them and treated the canines as pets on the military base.

One night in February a suicide bomber came to the base in the middle of the night, wearing 25 pounds of explosives and intent on killing Americans.

The three dogs frightened, barked at and bit the bomber, scaring him and waking the sleeping soldiers in the process. Deterred, the terrorist detonated himself outside instead of coming in.

The lives of 50 soldiers were potentially spared because of the dogs' actions.

Sasha was killed, but Target and Rufus lived. Medics treated the injured dogs like soldiers and the two were saved. 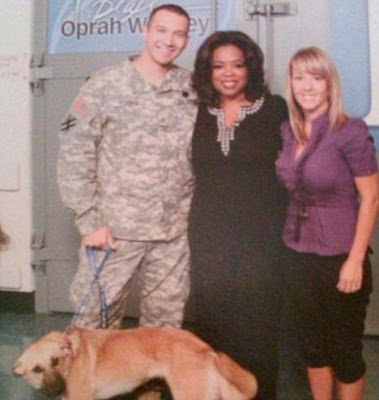 Only five soldiers were injured in the bombing and all recovered

Sgt Young said the dogs was treated like royalty from then on at the base at Dand Patan, near the Pakistan border. With the help of aid groups, Sgt Young brought Target to the San Tan Valley area south-east of Phoenix in August, when he returned home from his tour of duty. Rufus went to live with another soldier in Georgia.

Target was featured on 'Oprah' in September in a show about amazing animals.
On Friday of last week the dog escaped from the family's backyard. Sgt Young then put out notices and contacted TV stations that did reports on the missing dog.

A neighbour found Target wandering later that day and put her in his backyard and called the shelter. The dog did not have a microchip or tag.
On Friday night, Sgt Young found Target's picture on a website used by Pinal County's dog catchers to help owners track lost pets. He thought the shelter was closed for the night and weekend.
He showed up at the shelter in Casa Grande to claim his dog on Monday, only to find out she was dead. County officials say the employee mistakenly took the dog out of its pen Monday morning and euthanized it.
'My four-year-old son just can't understand what is going on with Target and keeps asking me to get the poison out of her and bring her home. They don't want her to go be with God yet,' a teary Sgt Young told the local CBS TV station.
The Arizona Republic said Sgt Young and his family will get the dog's cremated remains.
www.dailymail.co.uk
Posted by jmmb at 7:20 AM 2 comments: