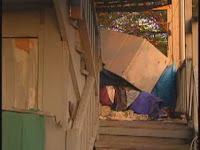 CHICAGO (AP) - Authorities say two people in their 70s were found buried under mounds of trash in their home on Chicago's South Side.

Police Lt. Dale Kingsley says their home was "packed from floor to ceiling" with garbage and may have to be condemned.

Chicago Fire Department paramedics conducting a well-being check Monday evening found the stench so overpowering they had to don hazardous materials suits before going inside the home.

Fire Department spokesman Kevin MacGregor says the man and woman were taken to Jackson Park Hospital in critical condition. A hospital nurse says their condition had improved by Tuesday morning.

MacGregor says the couple hadn't been heard from in three weeks.