Here's A Fish Tale About the One That DIDN'T Get Away!

A Westover man made a record catch while fishing on the Pocomoke River on July 31.  20 year old Justin Kelly reeled in a 17 pound longnose gar that was 49 inches long.  The fish put up a fight, but when he saw how big it is, he went to the nearest Maryland Fishing Challenge award center.  The previous state record for a longnose gar – 16 pounds and exceeded the 36-inch minimum angler award size.  Kelly is now one of over 90 Maryland fishing record holders. 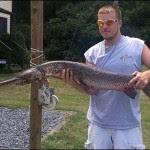 NEWS RELEASE:  A Westover man caught a 17 pound, 49 inch longnose gar on July 31, setting a new State record. Justin Kelly, 20, was fishing on the Pocomoke River near Pocomoke City when he made the record catch, using steel leaders and live bluegill for bait.
“When the fish got close, I thought we were going to need a bigger net,” Kelly said.

After a long fight, he finally pulled the fish aboard and noticed its exceptional size. Kelly then took his catch to the nearest Maryland Fishing Challenge award center.
The center measured and weighed the fish, then checked the Maryland Fishing Guide to find that it exceeded the 36-inch minimum angler award size and broke the previous State record of 16 pounds for longnose gar. DNR Biologist, Keith Lockwood soon joined Kelly to examine the fish and certify the rare catch.
The longnose gar’s ancestry dates back to among the most primitive of species. This brackish water fish features a long, cylindrical body with tough scales and rows of large, sharp teeth. Its bony mouth makes it difficult to catch.
Kelly is now one of Maryland’s more than 90 fishing record holders. He will also join Maryland’s other angler award winners on September 10 at the Maryland Fishing Challenge Grand Finale event during the 44th annual Maryland Seafood Festival at Sandy Point State Park. He is entered in the grand prize drawing for a chance to win a boat and trailer package from Bass Pro Shops and Tracker Boats, thousands of dollars in fishing gear and trips from Bill’s Outdoor Center or a tropical vacation from World Fishing Network.